4 Paintings of the Crucifixion that you probably haven’t seen 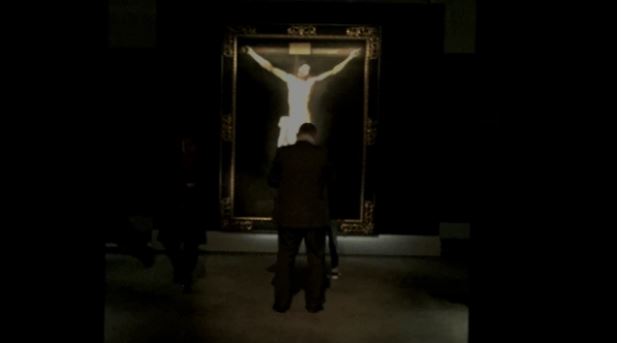 In recent years, these moving depictions of Christ on the Cross have only been shown to a limited group of museum-goers and visitors to auction houses and private collections.

With images in churches veiled, here are four painted Crucifixion scenes that are moving but have not been widely exhibited in recent years. There was once a time when the place for Catholics to see such a representation was at the altar. Now they attract crowds at museums, auction houses and private collections. It requires imagination to view them as they were once intended when they are no longer accompanied by incense and the murmur of prayer at Mass. Here are four that will never be seen in a sacred setting.

1. Back on view: Ugolino di Nerio

This early painted depiction of the Crucifixion is in the Courtauld Gallery, London. Hidden for three years as the building was renovated, it is now on view again, alongside some of the greatest works of the Renaissance. The artist’s use of gold and bright red was highly innovative when it was painted in 1320 as part of an altarpiece. The different pieces have been scattered across major collections. This section would have been the most significant. Rather than showing the Virgin Mary and St. Mark with the crucified Christ, there are the figures of the donors who paid for this austere masterpiece.

Three centuries after Ugolino de Nerio and the Italian Renaissance, it was Spanish artists who created some of the most memorable images of the Crucifixion. Alongside Velazquez, El Greco and Murillo there was Francisco de Zurbaran. The dark, intensely mystical feel of Spanish Catholic art was brought out to perfection when this painting was briefly displayed at a Sotheby’s auction preview in 2019. Placed in a large room by itself with no lighting other than on the painting itself, Zurbaran would surely have been impressed. The life-size Christ was so truly on his own, viewers of all religious beliefs were overwhelmed with a feeling of pathos and hidden power.

While di Nerio and Zurbaran were creative celebrities in their day, the vast majority of Crucifixion scenes have been painted by anonymous believers. This triptych in the collection of the yet-to-be-opened Museum of the Cross exudes raw vigour and devotion. It’s in a folk tradition that is typical of Romania but also serves as a reminder of Ukraine, its troubled neighbour to the north. Both countries suffered considerable religious persecution during the Soviet era.

This painting of Christ’s Passion puts the focus on Our Lord’s tortured face. Crucifixion was a highly traumatic subject for Issam El-Said (1938-1988). As well as being one of Iraq’s most renowned artists and thinkers, his grandfather had been prime minister of Iraq. Issam was affected for the rest of his life when a mob crucified his grandfather in the streets of Baghdad. The Muslim artist’s empathy with Christ is almost tangible. The small painting was on display at Bonhams auction house in 2005 and has not been seen since.