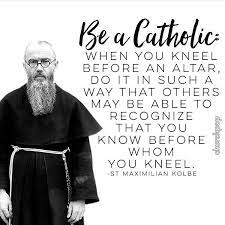 Learn More about this wonderful Saint at https://kolbeshrine.org/about-saint-maximilian