Apostle of the Apostles 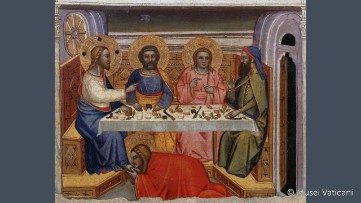 Apostle of the Apostles

“Apostle of the Apostles” is the title given Mary Magdalene by St Thomas Aquinas. Her name comes from her home town of Magdala, a fishing village on the western shore of Lake Tiberias. St Luke the Evangelist tells us, in Chapter 8 of his Gospel, how Jesus went from town to town announcing the Good News of the Kingdom of God, and how the Twelve Apostles were with Him together with some women who had been healed of evil spirits or infirmities, and were serving them. Among these was a certain “Mary, called the Magdalene, from whom seven demons came out.”

Misconceptions about her identity: she was not a prostitute

As Biblical exegesis teaches, the expression ‘seven demons’ could indicate a serious physical or moral malady that had struck the woman and from which Jesus had freed her. But, until now, tradition has claimed that Mary Magdalene was a prostitute. This is only because in Chapter 7 of Luke’s Gospel we read of the conversion of an anonymous “known sinner in that city” who, when Jesus was a guest in the house of a notable Pharisee, bathed His feet with perfume and her tears and dried them with her hair.”  Without any real textual connection, Mary of Magdala was identified with that unnamed prostitute. But, according to Cardinal Ravasi, there is a further misunderstanding: anointing with perfumed oil is a gesture that was also performed by Mary, the sister of Martha and Lazarus, on a different occasion, as reported by the Evangelist, St John. And so, in some popular traditions, Mary Magdalene has come to be identified with this Mary of Bethany, after being confused with the prostitute of Galilee.

At the foot of the cross

Mary Magdalene appears in the Gospels in the most dramatic moment of Jesus’ life, when she accompanies Him to Calvary and, along with other women, observes Him from afar. She is still there when Joseph of Arimathea places the body of Jesus in the sepulcher, which is closed with a stone. And on the morning of the first day of the week, she returns to the tomb, finds the stone rolled away, and runs to warn Peter and John. They in turn hurry to the empty tomb and discover that the body of the Lord is missing.

Meeting with the Risen Lord

The two disciples return home but Mary Magdalene remains at the tomb in tears. Her initial disbelief gradually turns to faith when she sees two angels and asks them if they know where Jesus’ body has been taken. Then she sees Jesus Himself, but fails to recognize Him. She thinks He is the gardener, and when He asks why she is crying and who she is looking for, she replies: “Sir, if you have taken Him away, tell me where you have put Him and I will go and remove Him.” But Jesus says her name, “Mary” – and she recognizes Him at once: “Rabbuni!”, she says, which in Hebrew means “Master!”. Jesus then tells her: “Do not cling to me because I have not yet ascended to the Father; but go and find the brothers and to tell them I am ascending to my Father and your Father, to my God and your God.” So Mary Magdalene goes to the disciples and tells them she has seen the Lord and that He said these things to her. (cf. John 20).

She announces Jesus’ Resurrection from the dead.

Mary Magdalene is the first among the women following Jesus to proclaim Him as having overcome death. She is the first to announce the joyful message of Easter. But she also proved she was among those who loved Him most when she stood at the foot of the Cross on Mount Calvary together with Mary, His Mother, and the disciple, St. John. She did not deny him or run away in fear as the other disciples did, but remained close to Him every moment, up to and including the tomb.

The Feast of Mary Magdalene

Pope Francis elevated the memory of Mary Magdalene to the status of Festivity on July 22nd, 2016 in order to stress the importance of this faithful disciple of Christ. https://www.vaticannews.va/en/saints/07/22/st–mary-magdalene–disciple-of-the-lord-.html