Archbishop Gallagher: Pope is committed to going to Ukraine 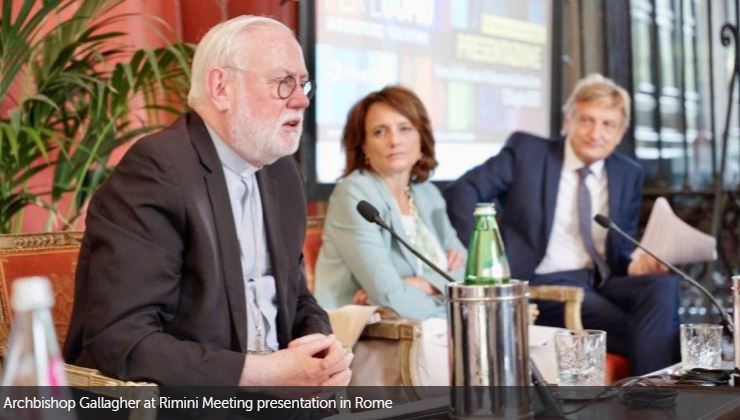 Archbishop Paul Richard Gallagher says Pope Francis wishes to go to Kyiv, Ukraine, but when and how this could happen remain unknown, and reflects on the diplomatic “failure” that did not prevent the war when there were warning signs of violence and aggression.

The Vatican Secretary for Relations with States and International Organizations made these comments on the sidelines of an event to present the annual Meeting of Rimini at Palazzo Borromeo, the residence of the Italian Embassy to the Holy See on Tuesday.

Speaking to some journalists present, including Vatican Radio’s Luca Collodi, Archbishop Gallagher reaffirmed the Pope’s interest in visiting the nation under attack, reflected on his own trip to the war-devastated nation recently, and on what he called ‘diplomatic failures’ that did not work hard enough to prevent the war, despite warning signs.READ ALSO20/05/2022

Archbishop Gallagher in Ukraine: ‘We persevere on path to peace’

08/07/2022Archbishop Gallagher: ‘I wouldn’t rule out Pope going to Ukraine in August’

Archbishop Gallagher made an appeal to never forget the war and grow accustomed to it.

Interest to go to Ukraine eventually

Responding to questions about a possible papal visit to Ukraine, he reiterated the Pope’s desire to go, underlining however that “the when and how we do not know.”

Recalling his own trip to the country, the Vatican official said he was fortunate to go to Kyiv in a moment of serenity on the ground, with bombings taking place both before and after our visit.”

“I registered dismay and disbelief,” he continued, “to find myself in the war in Europe.”

“At home it was my father and my grandfather who told about war. I saw destruction, protection and all this is a scandal for us. I saw a people resist, ready to fight and win. All this happened to us, in our time, while we thought that the war was now closed for Europe.”

“As [far as] diplomacy – Archbishop Gallagher admitted, – we must recognize a failure.

“It did not work; [diplomacy] did not know how to avoid this conflict,” he said.

Need for a diplomacy which prevents

“When I arrived in Rome from Australia in 2015, the Pope told me,” he shared, “that he did not want a diplomacy that reacts but foresees things, a preventive diplomacy. Ukraine tells us that we must try to anticipate conflicts, that diplomacy must have the ability to see the gravity of what is happening in the world. It must reaffirm the fundamental principles of international law. All this represents our failure. Perhaps we have not said any of this. We cannot be silent in the face of violence.”

While applauding the numerous States in Europe who were not indifferent to the tragedy, he expressed his concern that despite this great reception of Ukrainian refugees throughout Europe, a fatigue could start to set in and end this momentum.

“I think, perhaps, that it is too early to talk about reconstruction, but it is good to have a positive attitude. However, we must help the Ukrainians to rebuild the social fabric of the country with traumatized people in need of accompaniment,” he said.

Need for reconciliation and pardon

Archbishop Gallagher affirmed that “as a priest I feel the obligation to remember that we cannot ignore the message of reconciliation and forgiveness despite the intensity of suffering.”

In Europe, he said, we had the miracle of peace, recalling the reconciliation between France and Germany a few years after the World War II. “However,” he continued, “we have to renew some international institutions. The OECD [Organisation for Economic Co-operation and Development], for example, which should be the body that protects us, but also the European Union and the UN.”

The Archbishop further appealed, “We must not forget the Ukrainian crisis.”

Today, he said, news about the war “is forgotten.”

“We must instead continue to remember Ukraine, the war, keeping attention high for a peace project of the Spirit of God, to rediscover peace, a gift of God with which man must collaborate.”

The Meeting of Rimini, also known as the Meeting for Friendship among Peoples, sponsored by Comunione e Liberazione, with collaboration of the Ministry of Foreign Affairs and International Cooperation, will welcome to the Italian city situated on the Adriatic Sea, many well-known speakers and participants.

This year’s Meeting marks its 43rd edition, and is scheduled at the Fieri di Rimini from 20 to 25 August 2022 on the theme “A passion for the person.”

Some participants this year include Italy’s Premier, Mario Draghi; the President of the Italian Bishops’ Conference and the Archbishop of Bologna, Cardinal Matteo Zuppi; Archbishop Paolo Pezzi for the Archdiocese of Mother of God in Moscow; His Beatitude Pierbattista Pizzaballa, Latin Patriarch of Jerusalem; Cardinal Dieudonné Nzapalainga, Archbishop of Bangui, Central African Republic.