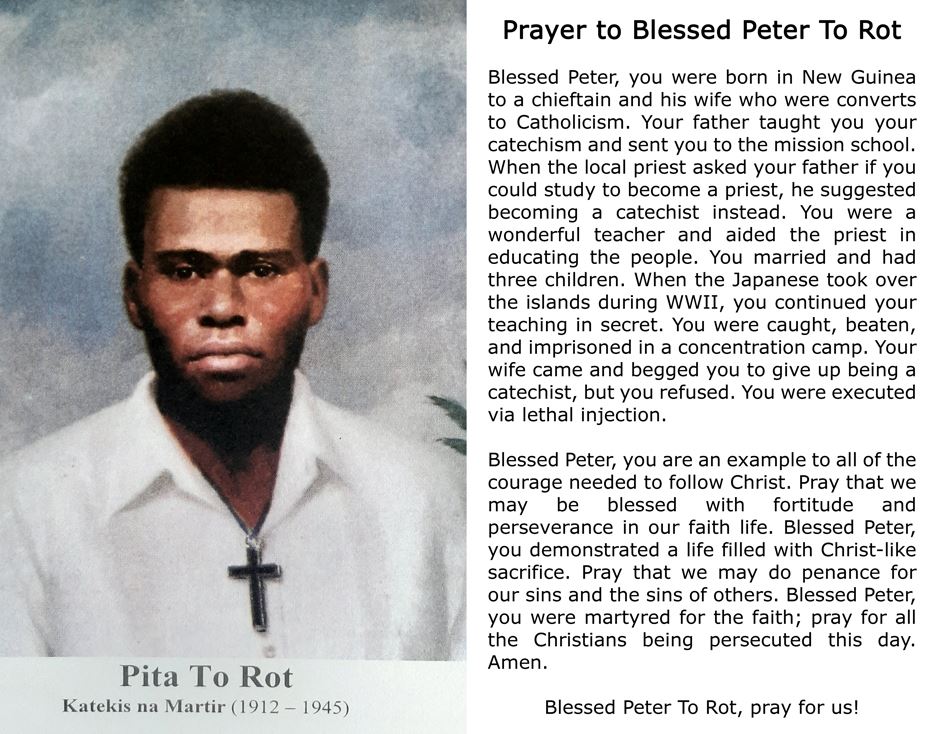 Peter To Rot lived on a tropical island in the Coral Sea, in what is now known as Papua New Guinea. He was born in the village of Rakunai, where his father was the tribal chief. Peter’s parents, like many other other villagers, were catechized and later baptized by Missionaries of the Sacred Heart.

Peter grew up Catholic and thought of becoming a priest, but his father said it was too soon. So Peter studied to become a catechist who could work the missionaries to spread the faith. Then Peter was assigned to work as a catechist in his own village. As a teacher he was direct and dynamic and genuinely cared about the people. In 1936, Peter married Paula la Varpit, who was also Catholic. They joyfully celebrated the Church’s sacraments as well as local traditions. Peter and Paula were the parents of three children.

Then in 1942, the world as at war, and Japan occupied Peter’s island. The missionary priests were imprisoned. Peter, a layman, remained free. Peter worked even harder then. He and his catechists baptized babies and converts, visited the sick, assisted with charity, conducted Sunday services, and distributed the Eucharist to priests in prison.

Then the military police cracked down. They banned Christian worship and religious gatherings. They decided the islanders should return to polygamy, and Peter objected to this. Peter was arrested in the spring of 1945 and was confined to a cave. When his wife and mother came to visit, he informed them that a Japanese doctor was coming to visit, but he was not sick. He suspected a trick. He asked Paula to bring his good clothes—he wanted to be ready to meet God.

The doctor arrived and gave Peter an injection and something to drink, and plugged his nose and ears. When Peter began to convulse, the doctor covered his mouth, and the soldiers held his down until he suffocated. Soon the rest of the prison camp found out what happened to Peter.

The next morning, the Japanese guards acted surprised to find Peter dead. They said he had died of an infection, but the crowd that attended Peter’s funeral knew the truth. They knew Peter was a martyr for the faith.

Peter To Rot was beatified by Pope John Paul II in 1995. The ceremony took place in Papua New Guinea.