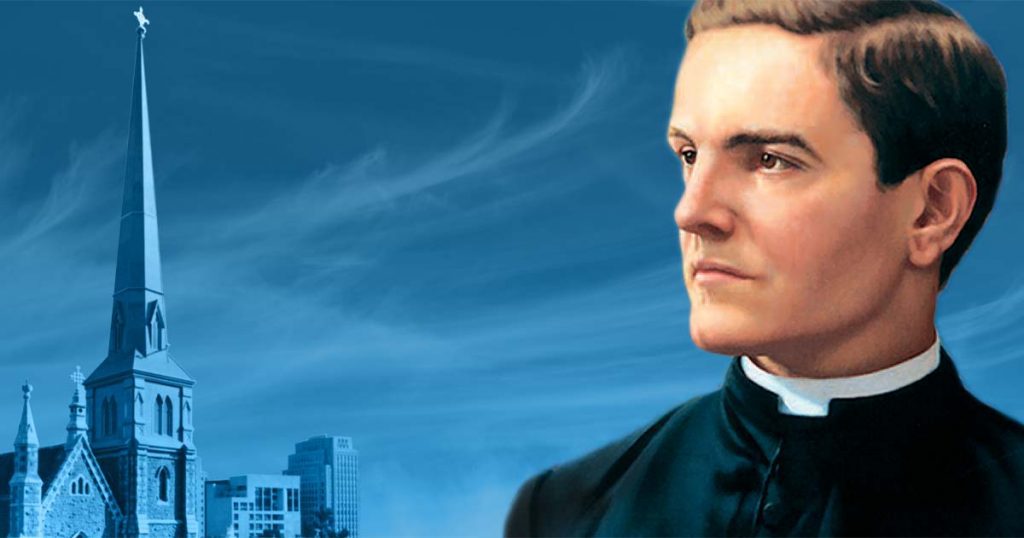 NEW HAVEN, Conn. — The excitement and celebration of the beatification of Blessed Michael McGivney on Oct. 31, 2020, in the Cathedral of St. Joseph in Hartford, Connecticut, was historic, as it marked the first beatification of a parish priest held on U.S. soil.

The joy of this year continues as the first celebration of the feast of Blessed Michael McGivney will be held this Friday, Aug. 13, at St. Mary’s Church in New Haven, the parish where he first served, from 8am to noon.

While the feast will be celebrated in the Archdiocese of Hartford, priests in other dioceses will be permitted to celebrate votive Masses for Knights of Columbus gatherings on this date with their bishops’ permission.

The Knights of Columbus are thrilled to celebrate their founder. “This is a day that Knights across the United States and around the world have been praying for, and many of us will gather for Mass, prayer services, Rosaries and other devotions,” Brian Caulfield, vice postulator for the cause of Blessed Michael McGivney, told the Register.

“Knights have always been aware of the holiness and heavenly intercession of Father McGivney, and now we are happy to share devotion to him with all Catholics.”

Supreme Knight Patrick Kelly told the Register, “The first feast day for Blessed Michael McGivney is a chance to reflect on his legacy and redouble our efforts to honor him every day as Knights of Columbus. One of my top priorities as Supreme Knight is to serve the family during these difficult times. As Knights, we read the ‘signs of the times.’ My strong belief is that we are now being called to help the Catholic family in every way we can. Blessed Michael McGivney did so much for Catholic families in his lifetime, and, like St. Joseph, he is a perfect role model for Catholic men.”

Kelly recalled how Father McGivney brought men together 140 years ago to create the Knights of Columbus, an organization committed to serving the family and serving others.

“He stepped into the breach to serve the men and families of his day. His beatification was a tremendous confirmation of where the Knights have been and where we’re going. My goal is to continue his great legacy of men and families committed to charity, unity and fraternity and build on it where we can.”

Ordained in Baltimore’s historic Cathedral of the Assumption on Dec. 22, 1877, Father McGivney headed to his native Waterbury, Connecticut, to celebrate his first Mass at Immaculate Conception Church, the parish in which he grew up and today is the Basilica of the Immaculate Conception. Then he traveled 22 miles south to New Haven and St. Mary Church to begin his first assignment as a curate on Christmas Day 1877. There, he would found the Knights of Columbus, which grew to be the largest Catholic fraternal organization in the world.

Now the faithful, at the recently restored St. Mary Church, where Blessed Michael McGivney is entombed in granite, will celebrate his first official feast day. The feast falls between his birthday in 1852 and the day he entered eternal life in 1890 at St. Thomas Parish in Thomaston, where he eventually was assigned as pastor.https://d63d72d18b4a44f657ba34511641afa1.safeframe.googlesyndication.com/safeframe/1-0-38/html/container.html

“The celebration is one of incredible importance to this parish,” said Dominican Father John Paul Walker, pastor of St. Mary’s. “These are the modern successors of Father Michael McGivney’s parishioners, and there is much devotion to Blessed Michael McGivney in the parish. It will be a day of profound grace and great joy to both our parishioners and those others coming from near and far to celebrate with us.”

St. Mary’s is holding a novena of Masses leading up to Aug. 13. Homilies are highlighting the newly Blessed’s life, legacy and priestly ministry, in which he was ahead of his time by involving the laity, leading them to high spiritual standards and to parish and charitable participation. On the feast-day vigil on Aug. 12, Daniel and Michelle Schachle, the parents of Michael, their young son who received the miracle that led to Father McGivney’s beatification, will talk about the miracle and how it occurred. (On Friday afternoon, Daniel will speak at the Blessed Michael McGivney Center in New Haven on how Father McGivney is relevant\.)Michael was born on May 15, the anniversary of the chartering of the first Knights of Columbus council. He, like Father McGivney, is one of 13 children, but at opposite ends of the spectrum. Father McGivney was the oldest in his family; Michael is the youngest.

The Schachles are excited about this first feast day, yet at the same time “completely humble,” said Daniel, an agent for the Knights’ insurance program, while they were traveling to New Haven from their home in Tennessee. Noting that it is hard to describe their feelings in words, he said, “We can never pay Father McGivney back enough for what he has done for the family and for Michael and also for how the Knights of Columbus has changed his life and my life.”

Bob and Margaret Ransom and their two teenage sons are looking forward to this feast day, too. Margaret is Blessed Father McGivney’s great-grandniece.

“I have been praying to Father McGivney for his intercession on behalf of friends and family and think about him often,” she told the Register. “I’ve been looking forward to the first feast of Blessed Michael McGivney since last year, when it was announced at his beatification that the date would be Aug. 13, the day in between his birthday on the 12th and the 14th, when he died. I’ve had a high level of anticipation leading up to his feast day and find myself having an overall sense of feeling more religious because of it.”

Bob, who works for the Knights of Columbus and is the administrator for the cause of sainthood, added that a feast day by definition is a cause for a celebration. “Seeing that celebration being planned and the emphasis on Blessed Michael McGivney’s feast by churches throughout the country, as well as the area parishes we have relationships with, really illustrates its importance and the Church’s response.”

He added that the family was so honored to be included in such a special way at the Knights of Columbus’ Opening Mass of the 139th Supreme Convention, which emphasized Blessed Michael McGivney. “It’s all the more special being the first feast this year.” He said, “The memories of all the amazing events last year are still so fresh.” Together, they “really heighten the excitement.”

Father Sullivan has had a longtime devotion to the newly beatified priest.

“I had a devotion to him since I was 18 years old,” he said. “Personally, I grew up very close to where he was born, along the banks of the river. My brother and I had the privilege of serving the Mass of moving his body from Waterbury to New Haven in 1982. And now it comes full circle — being the pastor of the church he belonged to is a joy.”

Father Sullivan will remember Father McGivney’s feast the following day with a Mass on top of Holy Land USA in Waterbury, to honor the day of Father McGivney’s death and the eve of the Assumption. Between 1,000 and 2,000 people are expected.

“We are very excited about the life and legacy of Father McGivney,” Father Sullivan said. He believes there is a strong connection because Waterbury helped determine who he became as a person and a priest. “He grew up in a faith-filled family in a factory setting. … He saw fathers and breadwinners die at early ages, widows and orphans, large families struggling. It is really where he was shaped and I believe where his vision of the Knights of Columbus was initially formed.”Latest News

“Father McGivney’s life and legacy will continually be celebrated here,” he concluded.

After this first feast-day celebration. Father Walker hopes for that increase in devotion and visits to St. Mary’s, where Blessed Father McGivney tirelessly spent several years of his priesthood. “Obviously, COVID is still rearing its ugly head in some ways, and that has kept pilgrim groups away,” Father Walker said. “But we’re certainly excited about many more people coming to the church to learn about Blessed Michael McGivney, coming to his tomb, and making it a pilgrimage destination.”

They Might Be Saints: Father Michael McGivney will air at 5pm Aug. 13.

Joseph Pronechen Joseph Pronechen is staff writer with the National Catholic Register since 2005 and before that a regular correspondent for the paper. His articles have appeared in a number of national publications including Columbia magazine, Soul, Faith and Family, Catholic Digest, Catholic Exchange, and Marian Helper. His religion features have also appeared in Fairfield County Catholic and in major newspapers. He is the author of Fruits of Fatima — Century of Signs and Wonders. He holds a graduate degree and formerly taught English and courses in film study that he developed at a Catholic high school in Connecticut. Joseph and his wife Mary reside on the East Coast.