Do you have a Personal Daily Roman Missal? 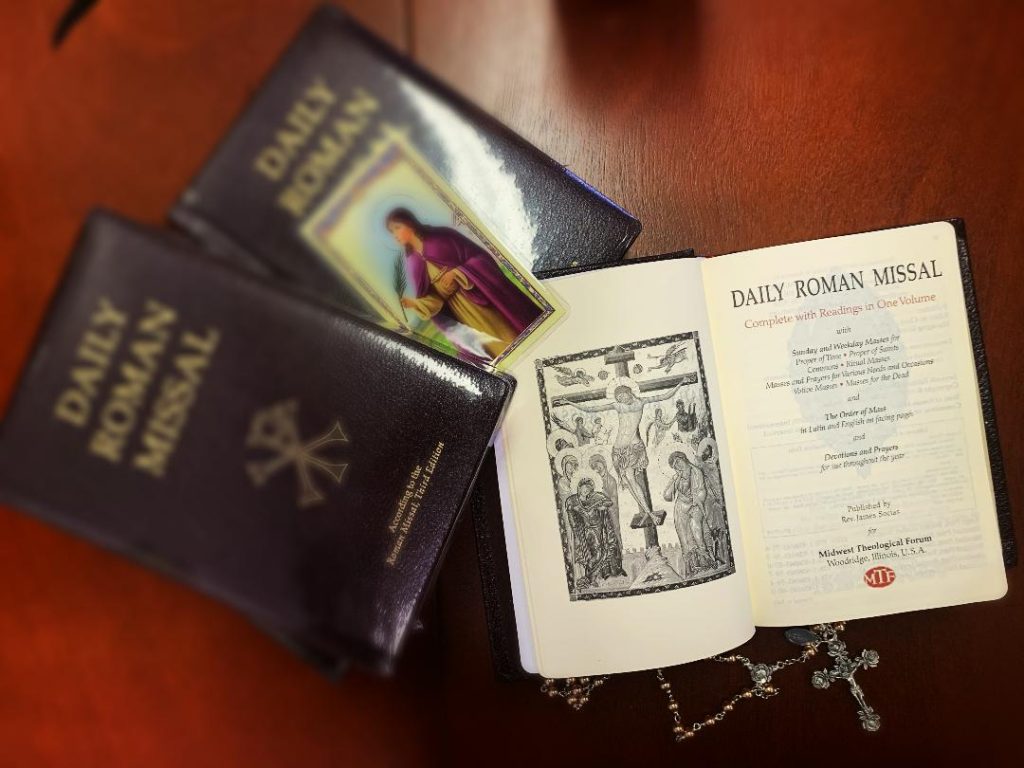 The Daily Roman Missal is available at the St. Lucy Holy Shop. Due to the size of the shop we cannot be open to the public with the current Social Distancing Protocols. However, we are able to take orders for the Daily Roman Missal by calling the church @ 561-278-1280 ext 107 or stopping by the Rectory Office.

You may pick up or stop by for your Daily Roman Missal in the Rectory Office Monday – Friday, 9-4.

The Roman Missal is the book containing the prescribed prayers, chants, and instructions for the celebration of Mass in the Roman Catholic Church. Published first in Latin under the title Missale Romanum, the text is then translated and, once approved by a recognitio by the Vatican Congregation for Divine Worship and the Discipline of the Sacraments. . . , is published in modern languages for use in local churches throughout the world.

In 2002, Saint John Paul II introduced a new edition of the Missale Romanum (editio typica tertia, the “third typical edition” [since the Second Vatican Council]) for use in the Church. Soon after, the complex work of translating the text into English began.

As the Church in the United States introduced the new edition of the Missal in late 2011, so too did much of the English-speaking world. In addition, the Missale Romanum, editio typica tertia is being translated into other languages for use by the the Church in other countries. The process of implementing a new edition of the prayers of the Mass is not new, but has occurred numerous times throughout the history of the Church as the Liturgy developed and was adapted to particular circumstances to meet the needs of the Church.

In the earliest centuries of the Church, there were no books containing prescribed liturgical prayers, texts, or other instructions.  Because the faith of the Church was (and still is) articulated in liturgical prayer, there was a need for consistency and authenticity in the words used in the celebration of the Liturgy.  Collections of prayers developed gradually for use in particular locations and situations such as for a particular monastery, for the Pope, or for other local churches.  Such collections were contained in libelli (“booklets”) which over centuries were drawn together into larger collections of prayers.

Eventually larger, more organized collections of prayers were assembled into “sacramentaries” (liber sacramentorum or sacramentarium), which contained some, but not all, of the prayers of the Mass.  The earliest of these sacramentaries were attributed to Pope Leo I, “Leo the Great” (440-461), and Pope Gelasius (492-496), but surviving versions of those sacramentaries date from centuries later.  Other early manuscripts (such as the Ordines Romani) contained detailed descriptions of the celebration of the Mass with the Pope in Rome.

Those written accounts may have gradually served as instructions or rubrics for the celebration of Mass in other settings.  Liturgical books grew as they passed from one community (a local church, a diocese, a monastery, etc.) to another, often with prayers added in margins or in blank spaces.  The process of sharing text was by copying by hand.  This was a laborious task which at times led to inconsistencies and errors.

The first true liturgical books which could be called “missals” were found in monasteries beginning around the 12th and 13th Centuries.  A missale contained not only the prayers but the biblical readings, the chants, and the rubrics for the celebration of Mass.  It is difficult to trace exact origins of the first missal.

The first book bearing the name Missale Romanum appeared in 1474, perhaps not coincidentally in the same century as the invention of the printing press by Johannes Gutenberg (1440).  But it was not until after the Council of Trent that Pope Pius V, in 1570, promulgated an edition of the Missale Romanum that was to be in obligatory use throughout the Latin Church (except in cases where another rite had been in place for at least 200 years).  This marked the first official attempt at uniformity in the celebration of the Mass in the history of the Church.

Since that time, to accommodate the ongoing evolution and development of the Liturgy, new editions of the Missale Romanum were promulgated by Popes for use in the Church:

In addition, there were a number of other minor revisions to the text, published as “reprints” which incorporated minor changes.  The most recent of these were in 1957 after Pope Pius XII’s revisions to the rites of Holy Week and the Sacred Triduum in 1955, and in 2008, when Pope Benedict XVI incorporated a number of additional prayers, included those for recently canonized saints as well as for the celebration of an extended Vigil for Pentecost.