Do you know Father Augustus Tolton? 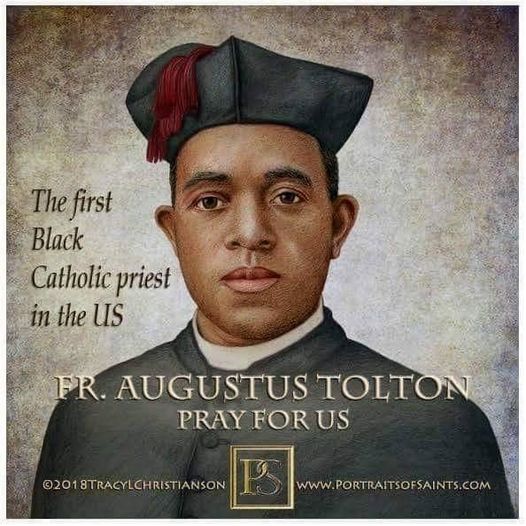 Prayer for the Cause of Father Augustus Tolton

O God, we give you thanks for your servant and priest, Father Augustus Tolton, who labored among us in times of contradiction, times that were both beautiful and paradoxical. His ministry helped lay the foundation for a truly Catholic gathering in faith in our time. We stand in the shadow of his ministry. May his life continue to inspire us and imbue us with that confidence and hope that will forge a new evangelization for the Church we love.

Father in heaven, Father Tolton’s suffering service sheds light upon our sorrows; we see them through the prism of your Son’s passion and death. If it be your will, O God, glorify your servant, Father Tolton, by granting the favor I now ask through his intercession, (mention your request), so that all may know the goodness of this priest whose memory looms large in the Church he loved.

Complete what you have begun in us that we might work for the fulfillment of your kingdom. Not to us the glory, but glory to you O God, through Jesus Christ, your Son and our Lord. Father, Son and Holy Spirit, you are God, living and reigning forever and ever. Amen

Father Augustus Tolton is the first publicly recognized Black Roman Catholic Priest in America. He was born to Peter Tolton and Martha Chisley on April 1, 1854 in Missouri. Both his parents were slaves. Augustus and his two siblings were taught to know and live the Catholic faith. Gus, as he was endearingly called, labored in the field at seven years old with his brother Charley.

Augustus’ father left the family to join the Union Army. Mrs. Tolton was left to take care of their three children. Later, the family learned that Mr. Tolton died of dysentery soon after his escape. Augustus, Charley and his mom stayed behind and continued their daily field work. Mrs. Tolton bravely escaped with her three children to Quincy, Illinois to keep the family united. They faced hardship in traveling many miles by foot and navigating a rowboat to cross a river. They safely made it to Quincy and once there, they found refuge with a widow and her daughter. Augustus, Charley and Mrs. Tolton worked at a tobacco factory.

Augustus learned how to pray and sing hymns from his mother. The Tolton family became parishioners at St. Boniface Church, where Mass was celebrated in the German language. Their pastor would read the Gospel in English and repeat his homily in English for the community of Blacks that would attend Mass. Through the years, Augustus learned how to speak German. Charley, Augustus oldest sibling, died at the age of 10 in the winter of 1863 due to pneumonia when Augustus was only nine.

Gus attended St. Boniface’s parish school, an all-white school, and his attendance was not well received. There were many kinds of threats: threats of parents who would no longer permit their children to attend school, termination of parish support, and others. Gus received his daily lessons after school to avoid the tormenting insults by his peers. He suffered from the insults and was withdrawn from school.

The Tolton family became parishioners at St. Lawrence Church. The pastor, Fr. Peter McGirr made it possible for Augustus to return to Catholic school. St. Lawrence had a school and Fr. McGirr ensured that Gus would not have the same experience as he had previously. Gus became the first Black student at the school. Fr. McGirr received some threats but he addressed them through his homilies each Sunday using sacred scripture and the threats ceased. At St. Peter, St. Lawrence’s new parish name, Gus learned, felt safe and attended school for three months out of the year for three to four years. He stayed after school when he could to learn how to serve at Mass. The rest of the months of the year, were dedicated to work in the tobacco factory.

Augustus, 16, received his First Confirmation and his First Communion at St. Peter in 1870. Before work at the factory, he would serve at Mass. Young Augustus was very devout in his faith. Fr. McGirr talked to Augustus about the priesthood and they realized there were no Black priests in America. With the assistance of Fr. McGirr and others, Augustus applied to various seminaries in the country and was not accepted due to them not being ready to accept a Black student. No religious order or seminary would allow him to join. In the interim, Augusts received temporary tutoring for seminary school.

The Franciscans at St. Francis College (Quincy University) in Quincy accepted Gus as a student in 1878. Gus worked at a bottling plant, cleaned St. Peter’s, and attended school where he learned Latin and Greek. He saved his money for seminary school. Gus helped lead Sunday school in teaching the faith to Black children and helping them learn how to read with the formation of a school at St. Peter.

Fr. Richardt and Fr. McGirr sought the help of Bishop Baltes of Alton to help him get accepted into the Collegium Urbanum de Propaganda Fide. This seminary, in Rome, prepared seminarians to be missionary priests in various countries. Again, Augustus was told to stay in Quincy. Fr. Richardt persevered, and reached out to the general superior of the Franciscan Order, who knew the Cardinal Prefect of the Propaganda. After a period of several months and having sent the general superior detailed information about Augustus’ life, Augustus was accepted into the Propaganda. He desired to be sent to Africa after his studies.

On February 15, 1880, he left Quincy to Rome and arrived in Rome on March 10. He studied at the seminary for six years and his experience there was positive. He learned to play the accordion in Rome.

Fr. Tolton was ordained a priest on Holy Saturday on April 24, 1886 at the Basilica of St. John Lateran in Rome. The next day, Easter Sunday, he celebrated his first Mass at St. Peter’s Basilica. He was assigned to return to America, which was difficult to accept. Yet, he obeyed and returned to Quincy, Illinois. Fr. Gus was kindly welcomed back. He celebrated his first Mass in Quincy at St. Boniface Church on July 18th, 1886. He gave a special blessing to his mother and thanked her for all she had done in his life.

Fr. Tolton was assigned pastor at St. Joseph’s Church and school. St. Joseph’s Church, a new Black parish, arose from the school he had helped form when he was younger. Many people would fill the church on Sundays to attend Mass. People were attracted to Fr. Tolton’s beautiful homilies, spiritual guidance and goodness. However, Fr. Tolton appeared discouraged in that there were not many conversions. Despite issues of deep poverty among the community, the parish and school continued to operate.

Fr. Tolton knew he needed to raise funds for his parish and school and thus, he accepted various speaking engagements to attend in 1889. He traveled to places such as Washington, DC, New York, and Boston.

After his trips, he learned that the hardships presented to him by Fr. Weiss had escalated. White Catholics were now forbidden from attending St. Joseph’s parish and this action was supported by the Bishop. Fr. Tolton was only to minister to the Black community. Fr. Weiss advocated for Fr. Gus to be reassigned. Fr. Gus informed his Cardinal Prefect of the difficulties. He also wrote letters to various Bishops and asked if they would accept him in their diocese. Archbishop Patrick Feehan of Chicago informed Fr. Gus that he would be welcomed if allowed. Thus, Fr. Gus reached out to his Cardinal again and asked for permission to leave. After the third appeal to the Cardinal to be moved, he received permission. On December 19th, 1889, Fr. Gus discreetly left St. Joseph.

In 1889, he quietly arrived in Chicago and was appointed to St. Augustine’s church. However, he and the Black community were given the lower level of the church in a basement, St. Mary’s, to celebrate Mass. Soon after, he and the black community were able to move from the church basement to a storefront church, known as St. Monica’s chapel. In 1891, his mother, sister and 19 people he had baptized in Quincy relocated to Chicago. Fr. Tolton and the community wanted to build a parish for Black Catholics.

Fr. Tolton’s parishioners lived a life of poverty. Thus, Fr. Tolton tried all he could do to help acquire funding for the church they hoped to build. While in DC, Fr. Tolton learned of St. Katherine Drexel and her ability to help. Fr. Tolton sought her help through letters and she did contribute financially to help the mission. Construction of the church took place, yet limited financial circumstances stopped further construction.

Fr. Tolton continued his ministry at St. Monica’s by establishing adult religious classes and teaching the faith. He tirelessly attempted to help the Black community suffering the effects of poverty. He made multiple trips to visit the sick in their homes, on the streets, alleys and in other impoverished areas of the city.

On July 9, 1897, Father Tolton arrived in Chicago by train from a retreat for priests. A heat weave had hit the city that week and 105°F may have been the temperature that day. In route to his rectory, Fr. Tolton collapsed on the street. The police found him and took him to the hospital. Fr. Tolton died on this day at Mercy Hospital at 43. He exhibited signs of exhaustion. Medical records indicate that Fr. Tolton died of uremia and heat stroke. His mother, sister, the hospital’s chaplain and Sisters of Mercy accompanied Fr. Tolton in the hospital. Prior to his death, his parishioners had taken notice of his fatigue that displayed itself in his hands when giving Holy Communion and his need to sit when celebrating Mass. On July 12, Fr. Tolton’s solemn Requiem Mass was offered at St. Monica Church. The church was full with people and 10 police officers were called to help with the large attendance of people. On July 9, 1897, at his request, he was buried at St. Peter Cemetery in Quincy, Illinois.

On February 24th, 2011, the cause for his beatification and canonization began at St. James Chapel in Chicago. On February 13th, 2012, the Sacred Congregation for Causes of Saints at the Vatican granted him the title of “Servant of God.”