Edith Stein converted to Catholicism after reading this book 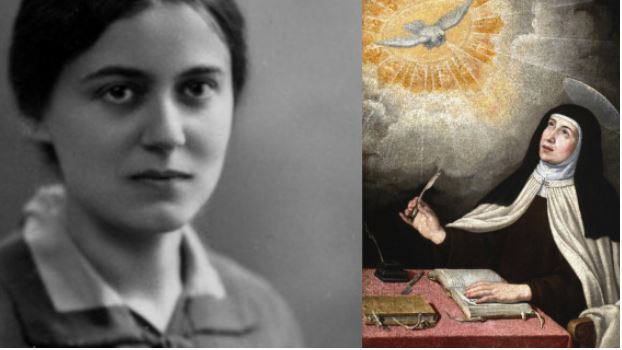 Edith Stein, an atheist philosopher, read St. Teresa of Avila’s autobiography and began her journey to the Catholic Church.

While raised in the Jewish faith, Edith Stein distanced herself from all religion in young adulthood. However, she went on a pursuit of the truth, primarily through the study of modern philosophy.

This intellectual journey led her to explore Christian writings, such as the New Testament and St. Ignatius Loyola’s Spiritual Exercises.

However, her head and heart were captivated by the Autobiography of St. Teresa of Avila.

The Vatican biography of her life explains how she came across this book.

In the summer of 1921, she spent several weeks in Bergzabern (in the Palatinate) on the country estate of Hedwig Conrad-Martius, another pupil of Husserl’s. Hedwig had converted to Protestantism with her husband. One evening Edith picked up an autobiography of St. Teresa of Avila and read this book all night. “When I had finished the book, I said to myself: This is the truth.” Later, looking back on her life, she wrote: “My longing for truth was a single prayer.”

According to the Institute of Carmelite Studies, St. Teresa of Avila’s book is technically not an “autobiography” and explores many fundamental questions of life.

Although usually referred to as such, Teresa’s book is not an autobiography; nor is it an intimate diary. What she deals with mainly are the supernatural (infused or mystical) realities of the interior life. Nonetheless, she does make use of autobiographical material as a backdrop against which she treats of the existence and value of the favors of God.

There was much for Edith Stein to learn from St. Teresa’s life, including her struggles with prayer and the interior life.

[St. Teresa of Avila] starts off by telling how from a very early age she began to receive God’s abundant grace. She was introduced to the path of prayer and, in her early 20s, even led to some initial experience in mystical prayer. Though she repeatedly frustrated God’s work, even to the point of abandoning prayer and the interior life, His mercy was finally victorious over her own sorry state. When, in the end, she surrendered more totally to His grace, God began His admirable and more immediate work within her soul

Some months after reading the book, on January 1, 1922, Edith Stein was baptized into the Catholic Church and would eventually become a Carmelite nun, choosing the name of Teresa in honor of St. Teresa of Avila. Arrested with other baptized Jews in the Netherlands, she was sent to Auschwitz, where she was killed in the gas chamber.

Edith Stein is now known as St. Teresa Benedicta of the Cross.