Feast Day of St. Bernardine of Siena and the Christogram IHS 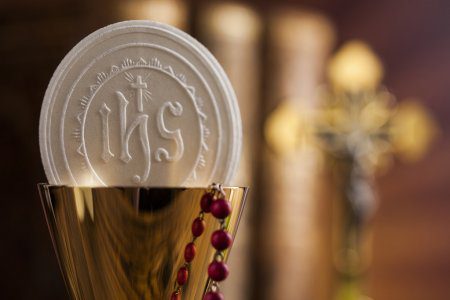 Do you know what IHS is in the Catholic faith and why its important? How many places do you see IHS ?

IHS is a Christogram — a combination of letters that represent the holy name “Jesus.” Early scribes would abbreviate the sacred names of Jesus by using the first two letters of the name, or the first and last letters, with a line over the letters. For example, the Greek letters Chi-Rho (which looks like our English X and P) was an abbreviation for the name “Christ.” Likewise, I (iota) and H (eta) are the first two Greek letters for “Jesus.” Sometime in the second century, the third letter, S (sigma), was added, thereby rendering IHS. These Christograms, such as XP or IHS, served as secret codes, whereby inscribed on a tomb, they indicated a deceased Christian, or on a doorpost, a Christian home.

St. Bernardine of Siena (1380-1444) and his student St. John of Capistrano (1386-1456) used the Christogram IHS to promote devotion to the Holy Name of Jesus. In their preaching missions throughout Italy, they carried wooden placards with the IHS surrounded by rays. St. Bernardine and St. John blessed the faithful with this monogram, invoking the name of Jesus, and many miracles were reported. They also encouraged people to have the monogram placed over the city gates and the doorways of their homes, instead of a family crest, to show their devotion and allegiance to the Lord. Countering the objections of some who considered this veneration superstitious, Pope Martin V in 1427 approved the proper veneration to the Holy Name and asked that the cross be included in the monogram IHS. Largely due to St. Bernadine’s preaching, the name “Jesus” was added to the Hail Mary: “Blessed is the fruit of thy womb, Jesus.”

During this time also, because of the decline of Greek and predominance of Latin, IHS was viewed as an acronym for the Latin Iesus Hominum Salvator, meaning “Jesus Savior of Mankind.”

What is most important is that each of us shows proper respect, reverence and devotion for the name of Jesus. St. Paul in his Letter to the Philippians wrote, “So that at Jesus’ name every knee must bend in the heavens, on the earth and under the earth, and every tongue proclaim to the glory of God the Father: Jesus Christ is Lord” (2:10-11). Just as a name gives identity to a person, the name of Jesus reminds the hearer of who He is and what He has done for us. Keep in mind that the name Jesus means “Yahweh saves” or “Yahweh is salvation.”

In invoking Our Lord’s name with reverential faith, one is turning to Him and imploring His divine assistance. An old spiritual manual cited four special rewards of invoking the holy name: First, the name of Jesus brings help in bodily needs. Jesus Himself promised at the Ascension, “In my name they will cast out demons, they will speak in new tongues, they will pick up serpents, and if they drink any deadly thing, it will not hurt them, they will lay their hands on the sick and they will recover” (Mk 16:17-19).

Second, the name of Jesus gives help in spiritual trials. Jesus forgave sins, and through the invocation of His name, sins continue to be forgiven. At Pentecost, St. Peter echoed the prophecy of Joel: “Then shall everyone be saved who calls on the name of the Lord” (Acts 2:21). As St. Stephen, the first martyr, was being stoned, he called upon the name of the Lord and prayed, “Lord Jesus, receive my spirit” (Acts 7:59).

Third, the name of Jesus protects the person against Satan and his temptations. Jesus on His own authority rebuked Satan and exorcized demons (e.g., the temptations in the desert, Mt 4:1-11).

Finally, we receive every grace and blessing through the Holy Name of Jesus. He said, “I give you my assurance, whatever you ask the Father, He will give you in my name” (Jn 16:23-24). In summary, St. Paul said, “Whatever you do, whether in speech or in action, do it in the name of the Lord Jesus” (Col 3:17). by Catholicstraightanswers.com