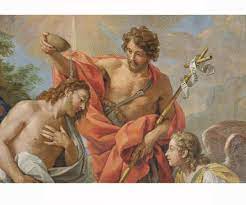 John the Baptist was a contemporary of Christ who was known for evangelization and his baptizing of Jesus Christ.

John the Baptist was born through the intercession of God to Zachariah and Elizabeth, who was otherwise too old to bear children. According to scriptures, the Angel Gabriel visited Elizabeth and Zachariah to tell them they would have a son and that they should name him John. Zachariah was skeptical and for this he was rendered mute until the time his son was born and named John, in fulfillment of God’s will.

When Elizabeth was pregnant with John, she was visited by Mary, and John leapt in her womb. This revealed to Elizabeth that the child Mary carried was to be the Son of God.

John began public ministry around 30 AD, and was known for attracting large crowds across the province of Judaea and around the Jordan River. When Jesus came to him to be baptized, John recognized him and said, “It is I who need baptism from you.”

Jesus told John to baptize Him anyway, which he did, whereupon the heavens opened, and the Spirit of God was seen like a dove. The voice of God spoke, saying, “This is my beloved Son, in whom I am well pleased.”

John instructed his followers to turn to Christ, calling Him the “Lamb of God” and these people were among the first Christians.

Following his baptism of Christ, John’s popularity grew so much that he alarmed King Herod. Herod ordered him arrested and imprisoned.

John spoke with Herod on several occasions and condemned his marriage to his half-brother’s wife.

John the Baptist’s feast day is June 24, and the anniversary of his death is August 29 and is sometimes celebrated with a second feast. John the Baptist is the patron saint of Jordan, Puerto Rico, French Canada and many other places.https://www.catholic.org/saints/saint.php?saint_id=152