Feast of Saints Peter and Paul 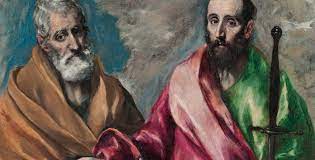 June 29 is the combined celebration of Saints Peter and Paul, both apostles and martyrs. It is a solemnity, the highest rank for a liturgical feast, and when it falls on a Sunday of Ordinary Time, it outranks the Ordinary Sunday and is celebrated, instead.

The Body of Christ, the Church, is a great structure, with Jesus as the keystone, the fellowship of believers as living stones (1 Pt 2:5), and the apostles with their preaching and teaching as the firm and solid foundation (see Eph 2:20). Of the apostles, Peter and Paul stand above the rest, the two greatest builders of the foundation. The Preface explains their contribution. Peter is foremost in confessing the faith, the one who established the early Church from the remnant of Israel; while Paul is the outstanding preacher of the faith, the master and teacher of the Gentiles. Each of them in a different way gathered together the one family of Christ (Roman Missal, 740).

The two spent very limited time with each other. Paul was not with Peter and the Eleven during Jesus’ three-year public ministry or for the initial years of the Christian community. Paul did spend fifteen momentous days with Peter in Jerusalem in 37 AD (Gal 1:18; see also Acts 9:26-28) shortly after his conversion. The majority was private time, just the two of them alone. Peter shared his first-hand knowledge of Jesus, and Paul listened intently. They shared their faith, exchanged stories about their ministry, spoke of the privilege and challenge of preaching the gospel, and strategized about how to carry on. They would see each other again fourteen years later during the Council of Jerusalem in 51 AD (see Acts 5:1-21). Each had a tremendous impact on the other.

Peter and Paul would go their separate ways, Peter mainly to the Jews of Israel, Paul mainly to the Gentiles of Syria, Turkey, and Greece, both in the power of the Holy Spirit, outstanding witnesses to Jesus, preaching with incredible courage and conviction. They worked great miracles and made numerous converts. Both made major contributions to Scripture. Peter probably was the eyewitness source for Mark and his gospel, and he wrote two Pastoral Epistles himself, 1 and 2 Peter; while Paul is the most prolific writer of the New Testament with thirteen letters attributed to him.

Both Peter and Paul ended in Rome. They did not conduct their ministry jointly in Rome, but both eventually were arrested and jailed, and according to tradition, confined in the same place, the Mamertine Prison, possibly held together for months or more. Both died as martyrs. Peter was crucified upside down during the persecution of the Emperor Nero, either in 64 or 67 AD, while Paul was beheaded in 67. Both are patron saints of the city of Rome, and both have magnificent churches dedicated to them, St. Peter’s Vatican Basilica over the location of Peter’s tomb, and St. Paul Outside the Walls at the place where Paul was executed.