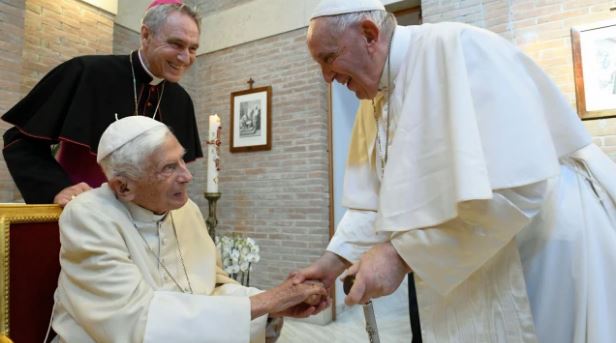 Pope Francis asked a special prayer for his predecessor at the end of today’s general audience.

At the end of the general audience of December 28, Pope Francis asked for a special prayer for his predecessor, Pope Emeritus Benedict XVI.

“I would like to ask all of you a special prayer for Pope Emeritus Benedict, who in silence is sustaining the Church,” Francis said. “Remember him, he is very ill; ask the Lord to console and sustain him in this witness of love for the Church until the end.”

Since Benedict’s retirement, he has dedicated his time to prayer for the Church, living in a monastery on the Vatican grounds.

Francis recently said that he visits him often. In an interview released on Francis’ birthday, December 17, he said:

The Pope said he visits his predecessor frequently, “and I leave edified by his clear gaze.”

“He lives in contemplation. … He has a good sense of humor and is very lucid, very alive. He speaks very softly, but follows the conversation. I admire his intelligence,” the Pope added.

Francis said simply of the Pope Emeritus: “He’s a great one.”

“And what do you most appreciate about him,” the reporters asked Francis.

“That he’s a saint. He’s a man of great spiritual life.”