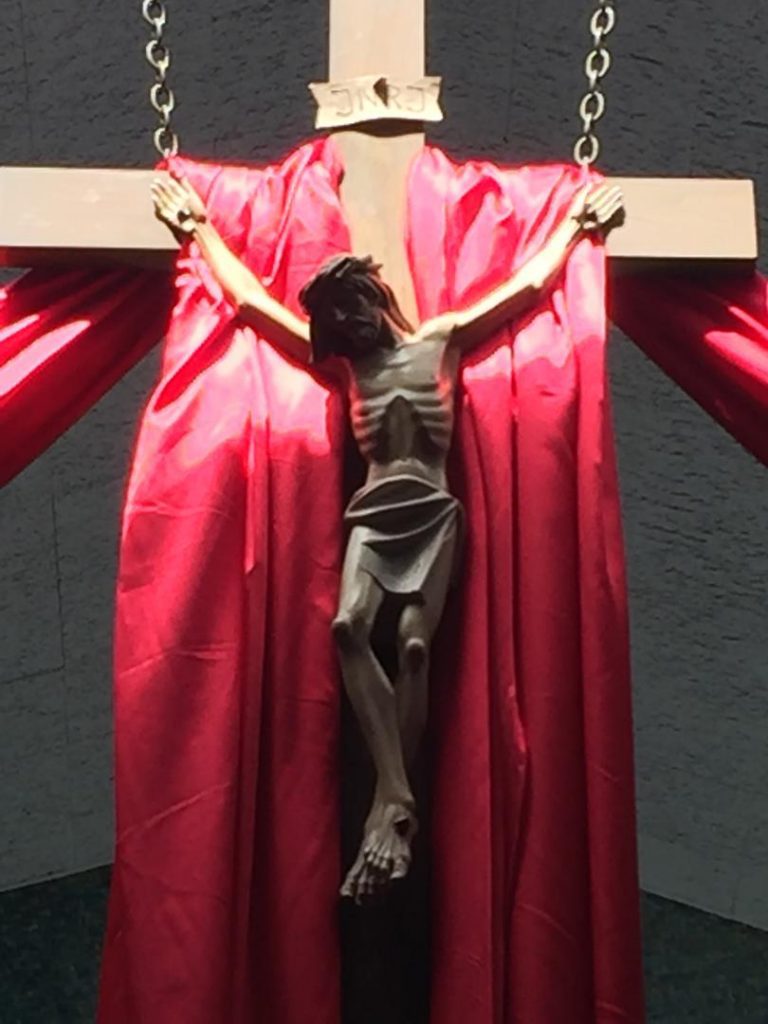 Good Friday is the day on which Catholics commemorate the crucifixion of Jesus Christ. Catholics are joined by almost all other Christians in solemn commemoration on this day. It is also a legal holiday around much of the world.

According to the gospels, Jesus was betrayed by Judas on the night of the Last Supper, commemorated on Holy Thursday. The morning following Christ’s arrest, he was brought before Annas, a powerful Jewish cleric. Annas condemned Jesus for blasphemy for refusing to repudiate Annas’ words that He was the Son of God. From there, Jesus was sent toPontius Pilate, the Roman governor of the province.

Pontius Pilate questioned Jesus but found no reason to condemn Him. Instead, he suggested Jewish leaders deal with Jesus according to their own law. But under Roman law, they could not execute Jesus, so they appealed to Pilate to issue the order to kill Jesus.

Pilate appealed to King Herod, who found no guilt in Jesus and sent Him back to Pilate once again. Pilate declared Jesus to be innocent, and washed his hands to show that he wanted nothing to do with Jesus, but the crowds were enraged. To prevent a riot and to protect his station, Pilate reluctantly agreed to execute Jesus and sentenced him to crucifixion. Jesus was convicted of proclaiming himself to be the King of the Jews.

Before his execution, Jesus was flogged, which was a customary practice intended to weaken a victim before crucifixion. Crucifixion was an especially painful method of execution and was perfected by the Romans as such. It was reserved for the worst criminals, and generally Roman citizens, women, and soldiers were exempt in most cases.

During his flogging, the soldiers tormented Jesus, crowning Him with thorns and ridicule.

Following his flogging, Jesus was compelled to carry his cross to the place of His execution, at Calvary. During his walk to the site of His execution, Jesus fell three times and the Roman guards randomly selected Simon, a Cyrene, to help Jesus.

After arrival at Calvary, Jesus was nailed to the cross and crucified between two thieves. One of the thieves repented of his sins and accepted Christ while on the cross beside Him. A titulus, or sign, was posted above Christ to indicate His supposed crime. The titulus read, “Jesus of Nazareth, King of the Jews.” It is commonly abbreviated in Latin as “INRI” (Iesus Nazarenus, Rex Iudaeorum).

During Christ’s last few hours on the cross, darkness fell over the whole land. Jesus was given a sponge with sour wine mixed with gall, a weak, bitter painkiller often given to crucified victims.

Good Friday: The Crucifixion of Jesus Christ, the Church and the Sacraments

Prior to death, Jesus spoke His last words, “My God, my God, why have you forsaken me?” This line is the opening of Psalm 22, and it may have been common practice to recite lines of songs to deliver a greater message. Properly understood, the last words of Christ were triumphant. Guards then lanced Jesus’ side to ensure He was dead.

At the moment of Christ’s death, an earthquake occurred, powerful enough to open tombs. The long, thick curtain at the Temple was said to have torn from top to bottom.

Following the incredible events of the day, the body of Christ was removed from the cross and laid in a donated tomb, buried according to custom.

Good Friday is a day of fasting within the Church. Traditionally, there is no Mass and no celebration of the Eucharist on Good Friday. A liturgy may still be performed and communion, if taken, comes from hosts consecrated on Holy Thursday. Baptism, penance, and anointing of the sick may be performed, but only in unusual circumstances. Church bells are silent. Altars are left bare.

The solemn, muted atmosphere is preserved until the Easter Vigil.

Veneration of the Cross

The Veneration of the Cross

In the seventh century, the Church in Rome adopted the practice of Adoration of the Cross from the Church in Jerusalem, where a fragment of wood believed to be the Lord’s cross had been venerated every year on Good Friday since the fourth century. According to tradition, a part of the Holy Cross was discovered by the mother of the emperor Constantine, St. Helen, on a pilgrimage to Jerusalem in 326. A fifth century account describes this service in Jerusalem. A coffer of gold-plated silver containing the wood of the cross was brought forward. The bishop placed the relic on the a table in the chapel of the Crucifixion and the faithful approached it, touching brow and eyes and lips to the wood as the priest said (as every priest has done ever since): ‘Behold, the Wood of the Cross.’

Adoration or veneration of an image or representation of Christ’s cross does not mean that we are actually adoring the material image, of course, but rather what it represents. In kneeling before the crucifix and kissing it we are paying the highest honor to the our Lord’s cross as the instrument of our salvation. Because the Cross is inseparable from His sacrifice, in reverencing His Cross we are, in effect, adoring Christ. Thus we affirm: ‘We adore Thee, O Christ, and we bless Thee because by Thy Holy Cross Thou has Redeemed the World.’

The Reproaches and the Reading of the Passion

The Reproaches (Improperia), are often chanted by a priest during the Good Friday service as the people are venerating the Cross. In this haunting and poignant poem-like chant of very ancient origin, Christ himself ‘reproaches’ us, making us more deeply aware of how our sinfulness and hardness of heart caused such agony for our sinless and loving Savior. A modern translation of the some of the Reproaches, originally in Latin follows:

Three times during Holy Week the Passion is read – on Palm Sunday, Holy Thursday, and Good Friday. By very ancient tradition, three clergy read the three principal parts from the sanctuary: Jesus (always read by a priest), Narrator, and all the other individual parts. The people also have a role in this – we are those who condemn the Lord to death. Hearing our own voices say ‘Away with Him! Crucify him!’ heightens our consciousness of our complicity by our personal sinfulness in causing His death.

Catholic schools will be closed on Good Friday so the children will be able to participate in family observances of this solemn day. If possible, the entire family should attend Good-Friday services together, or at least make a trip to Church to make the Stations of the Cross (see section on Stations). Following are a few other suggestions.

Hot Cross Buns. The familiar hot cross buns are sweet rolls with the sign of the cross cut into it, and they are one of several traditional European breads marked with a cross for Good Friday. According to tradition, these buns originated at St Alban’s Abbey in 1361, where the monks gave them to the poor people who came there. (You may have your own recipe for sweet-rolls to which you can add currants or raisins before shaping and cut a cross in the top before baking; or you can buy them.) These Good Friday buns were very popular, and were sold by vendors who cried,
Hot cross buns, Hot cross buns! One a-penny two a-penny, Hot cross buns! If you have no daughters, give ’em to your sons! One a-penny two a-penny, Hot cross buns!

‘Lord, by thy Cross and Resurrection thou hast redeemed the world’

In the symbol of the Cross we can see the magnitude of the human tragedy, the ravages of original sin, and the infinite love of God. Lent is a particularly appropriate time to attempt to penetrate the true meaning of this sacred image represents through prayerful contemplation; and to study the traditions surrounding the Christian symbol of the Cross.

Looking at the Cross in prayer helps us to truly see it. Most Christians have crosses in their homes. Many wear a cross around their necks. Some of these are very beautiful, perhaps made of precious metal and embellished with jewels. The beauty of these devotional objects may emphasize the glory and the victory of Our Lord’s Cross; but too often representations of this central symbol of our faith are regarded primarily as decorative, and its true message is lost.

It is fitting that Christians glorify the Cross as a sign of Christ’s resurrection and victory over sin and death, of course. But we should remember each time we see a cross that the Cross of Jesus’ crucifixion was an emblem of physical anguish and personal defilement, not triumph-of debasement and humiliation, not glory-of degradation and shame, not beauty. It was a means of execution, like a gallows or a gas chamber. What the Son of God endured for us was the depth of ugliness and humiliation. We need to be reminded of the tremendous personal cost of love.

As Lent advances we contemplate the redeeming Mystery of the Cross which aids the Church in her pursuit of the renewal of the faithful. The image of the Cross may help each of us to learn more fully the meaning of Christ’s sacrifice, and how we are to imitate His example. We can hope that our prayers which focus on the Crucifixion of our Lord will help atone for our own sins and the many grave sins of our society.

The season of Lent is a most appropriate time for children of all ages to learn more about one of the most distinctively Catholic prayers: the sign of the cross. It is a visible sign (a sacramental) of one’s belief in Christ and of one’s hope in the redemption which flows from His Cross. Accompanied by the invocation of the Trinity (Doxology), ‘In the name of the Father, and of the Son, and of the Holy Spirit’, making a sign of the cross is a simple and beautiful form of Christian devotion. By making this sign both in public and in private we affirm our faith in Christ crucified and ask for His blessing and protection. It is also a gesture of reverence to the Blessed Sacrament.