Happily Ever After … All the Way to Heaven 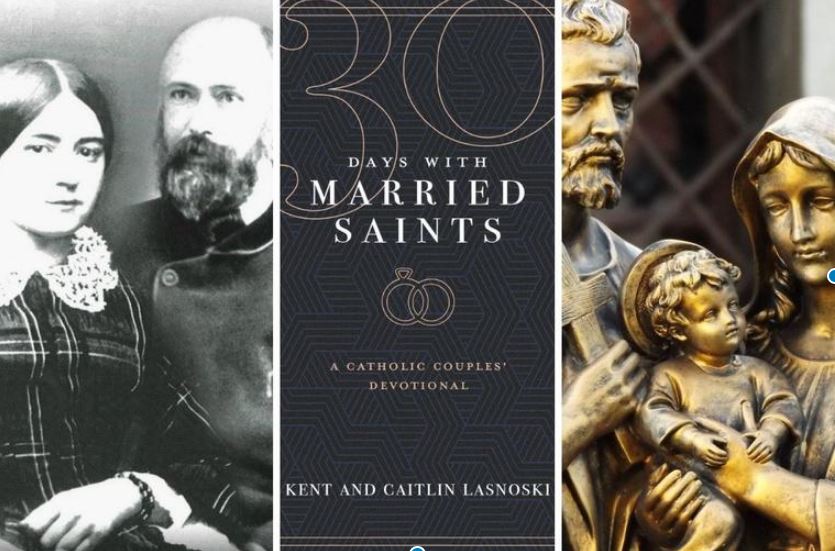 In 30 Days With Married Saints: A Catholic Couple’s Devotional, by Kent and Caitlin Lasnoski, readers will witness holiness through the lives of married saints who once walked the marital path. The Lasnoskis have been married 14 years and have eight children. For the last 12 years they’ve designed and run marriage preparation and enrichment programs.

Their book encourages spouses to live out God’s call to mirror his love on earth and to encourage one another so that they are transformed and become saints themselves.

They begin with the Holy Family, where God sent the Savior, his Son, Jesus Christ, to provide us with the examples of St. Joseph and the Blessed Mother as spouses. https://da58a7be2263038a12add0821d1f15dc.safeframe.googlesyndication.com/safeframe/1-0-38/html/container.html

“Joseph was a man who listened to God,” the Lasnoskis write.

“Joseph, the guardian of Jesus — our salvation — led his family wherever God led him.” They add, “In our households, we too have a duty to guard and protect any children we might have and to raise them justly to love God. … Amid difficult family situations and tough choices, we can be inspired by Joseph’s quiet perseverance and faithfulness to God’s call.”

Mary’s greatest example, the authors note, is in praising God, as she did in the Magnificat prayer, elevating the special moment of the Incarnation with a sense of purpose and joy.

Not every spouse is so holy, but according to the authors, regardless of the personality of their partner, “married saints passionately loved their spouses, delighted in their children, opened their homes to strangers, gave generously to others, and lived an intense piety.

“They also managed to find joy amid their day’s equivalents of dirty diapers, dishes, laundry, cubicles, traffic and office meetings. They were the salt and light of the world and the presence of the risen Christ to those who met them (see Matthew 5:13-16). Now from heaven these married saints continually intercede for the faithful’s intentions, including for your marriage.”

The other assorted couples range from unions of mutual saints to those where one of the spouses exhibited a difficult personality. In many, but not all, cases, the example of the saint converted the other. It’s noteworthy that not all married saints joined in matrimony based on romantic love, since some had arranged marriages yet were known for having a great love for one another.

Some married saints had desired to remain single and devote their lives to God. “In contrast, Blessed Aleth of Dijon married at age fifteen despite her parents’ ardent preference that she devote herself to religious life,” the Lasnoskis write. “Aleth had a very happy marriage and prayed that her children might enter religious life. Amazingly, all of them become priests or religious, including the great Saint Bernard of Clairvaux.”https://da58a7be2263038a12add0821d1f15dc.safeframe.googlesyndication.com/safeframe/1-0-38/html/container.html

Challenging relationships encouraged greater holiness from the married saints. “Saint Rita of Cascia prayed unceasingly for her unfaithful husband, and eventually he repented and converted. Saint Joan of France suffered an exceptionally cruel fate at the hands of her husband, King Louis XII. When her husband was captured and imprisoned, Joan interceded to win his release. Louis later repaid her kindness by working the system to have their marriage annulled.” In the end, though, God allowed good to come out of the king’s actions, for, as the authors note, Joan ended up “going on to rule a portion of the kingdom by herself and to found a religious order.”

In another example of an unhappy marriage with a holy ending, the Lasnoskis present St. Homobonus, who, “upon discovering that he and his wife were infertile, began adopting abandoned children from the streets. His querulous wife gave him no end of trouble until his patience won her over, and they worked as joyful partners to care for the orphans.”

The saintliness of these married couples in all circumstances, according to the Lasnoskis, overturn conventional marriage narratives: The way of radical holiness does not typically lead to a comfortable life. By following their varied examples, we can feel uplifted and supported in our own marriages.https://da58a7be2263038a12add0821d1f15dc.safeframe.googlesyndication.com/safeframe/1-0-38/html/container.html

Luigi and Maria lived ordinary lives. They met as teenagers. Luigi (1880-1951) studied law and became a civil servant. Maria (1884-1965) was quite pious, despite being raised in a fractious household by parents with very short tempers. Initially, Luigi was not very devout, but Maria began to have an impact on him so that eventually they shared a zeal for the faith, attending daily Mass together every morning. “Though it took time, Luigi and Maria began to see their marriage as a joint effort to reach heaven, and they encouraged one another in holiness,” the Lasnoskis write.

The Quattrocchis first lived with Maria’s parents and grandparents, and Luigi frequently traveled for work. In the beginning of their marriage, Maria’s letters reveal she struggled with childcare; but by the fourth pregnancy, she rejoiced. When it was discovered that she had placenta previa, with only a 5% chance of survival, they rejected the doctor’s recommendation for an abortion. Their fourth child, a daughter, was born healthy — it was deemed miraculous. They settled into an ordinary middle-class life, and their lives bore great fruit. Three children entered the religious life, and the youngest remained home to care for her aging parents.Latest News

Their son, Cesare, later recalled, as recounted in this book, “There was always a supernatural, serene, and happy atmosphere in our home, but not excessively pious. No matter the issues facing us, they always resolved it by saying that it had been appealed ‘to the heavens.’” Cesare also shared that his mother gave him a copy of The Imitation of Christ with the inscription, “Remember that Christ must be followed, if necessary, unto death.” As the authors relate, “Heavy words for a ten-year-old! Yet, also evidence of the importance his parents placed on heavenly things amid the ordinary events of family life.”

God First in All Circumstances

St. Isidore and Blessed Maria de la Cabeza, born in late-11th-century Spain, were examples of hard work and a strong partnership; poor farmers with outstanding holiness, they were faithful to work, to each other and to the Lord.

The owner of the land that Isidore tenant farmed respected him because of his hard work. Others, envious of him, told the landowner that Isidore went to Mass and prayed on Sundays rather than work the land. When asked about it, Isidore explained that he had to serve the Lord and then God would help him complete his work through the assistance of the holy angels. “Legend has it that Isidore’s employer actually witnessed the truth of Isidore’s words when he saw two angels tilling the fields one day while Isidore was attending Mass,” the authors write.

In another example of a married couple who prioritized God over all other things, the authors introduce their readers to Blessed Franz Jägerstätter, whose story was recently brought to the big screen in the 2019 film A Hidden Life. Jägerstätter was born on May 20, 1907, impoverished and out of wedlock to a chambermaid and farmer. He was ostracized as a child and grew up a rowdy troublemaker raised by his grandmother until he was 10, then adopted by his stepfather when his mother married. His life had ups and downs until a final conversion. It included a child out of wedlock. In 1936, Franz met the love of his life, Franziska, and they grew together deep in their faith, even honeymooning in Rome.

But seven years after their marriage and three daughters later, Germany’s Third Reich annexed Austria. Franz twice avoided the draft into the army, but the third time became a life-and-death issue.

“Nothing would allow him to participate in an unjust war. He preferred to risk all as a glorious witness to the truth,” the Lasnoskis write. He offered to serve his country in a nonviolent way. His request was rejected, and he was thrown into prison and executed on Aug. 9, 1943. Love letters between these spouses reveal the unity of their faith and deep love for each other and for God, a bond that not even death could destroy.

Other married saints in the book include kings and queens, infertile couples, spouses betrayed by adultery, as well as a variety of poor, rich, influential and anonymous, all with the common thread of a passionate love of God and of their spouse, regardless of challenges. https://da58a7be2263038a12add0821d1f15dc.safeframe.googlesyndication.com/safeframe/1-0-38/html/container.html

To celebrate July 12’s feast day, read the chapter on Sts. Louis and Zélie Martin, the parents of St. Thérèse. As the authors note: “Do what Louis and Zélie did — listen to God’s will and follow it”; this saintly married couple “were exemplary Christian disciples” who cultivated a holy household for themselves and their children.

“Like Louis and Zélie, with hearts full of love, may we be holy examples to our families and to those around us.”

Besides serving as a biographical digest of married saints, 30 Days With Married Saints also provides a program of devotional exercises, including a daily six-week walk of prayer, spiritual practices to employ, and personal encounters with married saints who can now help us with their earthly examples and intercessory prayers from heaven.

Holy married couples, pray for us

Patti Maguire Armstrong Patti Maguire Armstrong is an award-winning author and was the managing editor and co-author of Ascension Press’ bestselling Amazing Grace Series. Her newest books are Holy Hacks: Everyday Ways to Live Your Faith & Get to Heaven and Big Hearted: Inspiring Stories from Everyday Families. She has a B.A. in social work and M.A. in public administration and worked in both those fields before staying home to work as a freelance writer. Patti and her husband, Mark, live in North Dakota, where they are still raising the tail end of their 10 children. Follow her on Twitter at @PattiArmstrong and read her blog at PattiMaguireArmstrong.com.