How Hungary was founded by a “holy family” 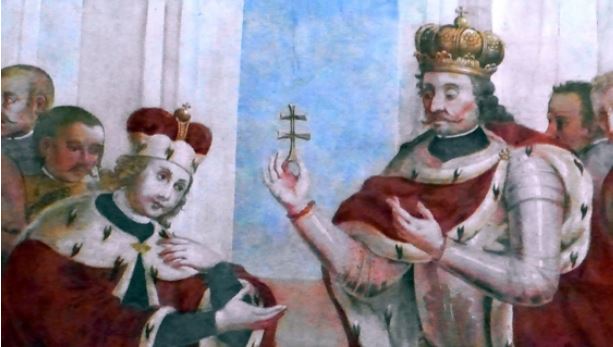 The Kingdom of Hungary began with St. Stephen, whose wife is beatified and son is canonized.

Not only was St. Stephen known for his personal holiness, but so were his wife, Bl. Gisela, and son, St. Emeric.

St. John Paul II commented on this saintly foundation in a message to the Hungarian people in 2000.

This history begins with a holy king, rather, with a “holy family”:  Stephen, with his wife, Bl. Gisela, and their son, St. Emeric, are the first saintly Hungarian family. This seed would sprout and bring forth a host of noble figures who would distinguish Pannonia Sacra: one need only think of St. Ladislaus, St. Elizabeth and St. Margaret!

Bl. Gisela was beatified in 1975. She was known for her efforts to spread the Christian faith throughout their kingdom, and after her husband’s death she spent the rest of her life in a Benedictine convent.

St. Emeric died young, at the age of 24, but followed his father’s example and strove for holiness in his life. After his death, many miracles were attributed to his intercession.

Continuing his reflection of the Hungarian nation, St. John Paul II noted how St. Stephen’s actions laid a firm foundation in the Christian faith that endured for many centuries.

At the dawn of the millennium, the figure of King St. Stephen stands out. He founded the State on the firm rock of Christian values, and for this reason wanted to receive the royal crown from the hands of my Predecessor, Pope Sylvester II. Thus the Hungarian nation was founded in deep unity with the Chair of Peter and bound by close ties to other European countries, which shared the same Christian culture. This culture was the vital sap flowing through the fibres of the developing plant, which assured its growth and vigor, and prepared the extraordinary flourishing that was to come.

As St. John Paul II mentioned above, many other saints would sprout from this foundation and reinforces the truth that a single family united to God can have a lasting impact on the world.