Little boy joins Pope Francis on stage, as he calls for closeness of elderly and youth 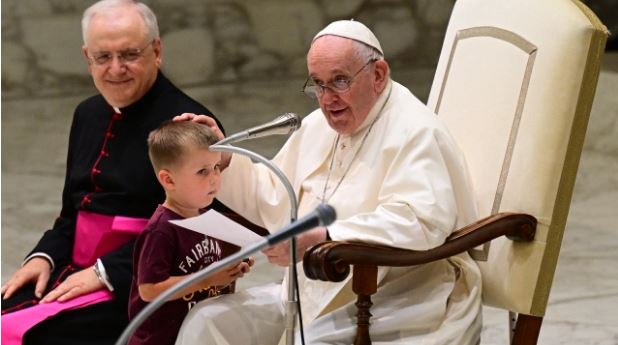 “The alliance between the elderly and children will save the human family,” Pope says forcefully.

The words of Pope Francis in the general audience of August 17 seemed to become reality, as a small child – whom the Pope described as courageous – insisted on joining him on stage.

The child brought a big smile to the Holy Father. He stood still and quiet, as the Pope put a comforting hand on his shoulder and patted his head. The five-year-old stayed attentive up to the final prayer and apostolic blessing.

“In the general audience, we’ve spoken of the dialogue between the elderly, and” — indicating the child with his hands — “young people,” the Pope said with a smile.

During the audience, the Pope had strongly emphasized the need for this dialogue.

The Pope noted how the elderly have a special influence with children: “The witness of the elderly is credible to children. Young people and adults are not capable of bearing witness in such an authentic, tender, poignant way, as elderly people can.”

It is painful – and harmful – to see that the ages of life are conceived of as separate worlds, in competition among themselves, each one seeking to live at the expense of the other: this is not right.

Death: When the beautiful part starts

The Holy Father spoke of the “difficult passage” of death — “All of us must go there, but it is not easy.”

But, he said, with death we “throw away the clock.”

“The beautiful part of life, which has no more deadlines, begins precisely then,” he said.

The Pope’s audience was placed in the context of the Scripture recounting Daniel’s dream, which he related to the first chapter of Revelation.

“Fear not, I am the first and the last, and the living one. I died, and behold, I am alive forevermore” (vv. 17-18). Thus disappears the last barrier of fear and anguish that a theophany has always provoked. The Living One reassures us, he gives us security. He too died, but now occupies the place destined for him –the First and the Last place.

Can we please give back to children, who need to learn to be born, the tender witness of the elderly who possess the wisdom of dying? Will this humanity, which with all its progress seems to be an adolescent born yesterday, be able to retrieve the grace of an old age that holds firmly to the horizon of our destination? […] Let us think about dialogue, about the alliance between the elderly and children, of the elderly with young people, and let us do it in such a way that this bond is not broken. May the elderly have the joy of speaking, of expressing themselves with the young, and may the young seek out the elderly to receive the wisdom of life from them.