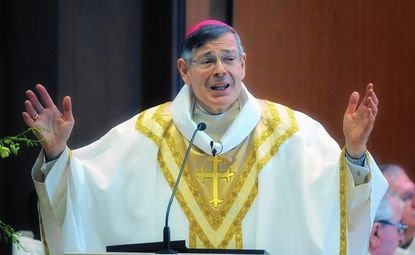 During this month of June, we celebrate the feast day of another one of the most popular saints of the Church — St. Anthony of Padua. June 13, which falls on Sunday this year, marks the day of the passage of Anthony into eternal life during the year 1231 at the young age of 36. St. Anthony is well known in the life of the Church as the patron saint of lost articles, travelers and also the poor. Just as many a home displays a statue of St. Francis of Assisi surrounded by animals, so also many a home displays one of St. Anthony of Padua holding the Christ child.  St. Anthony was a disciple of St. Francis of Assisi and the two were not only contemporaries, but closely bound in spirit, devotion and mission.  Indeed, St. Anthony can be understood as another St. Francis.

St. Anthony was born in 1195 in Lisbon, Spain, a city on the frontiers between Christian and Muslim cultures.  His father belonged to a noble family of knights who fought in the crusade to reclaim the Iberian Peninsula from Muslim rule.  He was rewarded with a great deal of property when Lisbon was liberated.  Anthony’s parents destined him for an ecclesiastical career ,hoping he would receive the position of canon at the cathedral. However, Anthony disappointed them by entering an austere community of Augustinian canons outside of Lisbon.  Some of the first members of the Order of Friar Minor, which St. Francis founded in 1206, came to the monastery where Anthony was living. Disappointed by the religious spirit of his monastery, Anthony was inspired by the evangelical poverty and simplicity of the Franciscans.  He was especially moved by their martyrdom when they went out as missionaries. Seized by a desire to likewise suffer martyrdom, he petitioned his superiors to join the Franciscan Order and was sent by the Franciscans to the missions in Africa.

St. Anthony’s ability to preach became known to St. Francis who gave him permission to preach throughout Italy. He was also commissioned to teach theology to the friars but, in the words of St. Francis to him, “in such a manner that the spirit of prayer be not extinguished either in yourself or in the other brethren.” The eloquence and wisdom of St. Anthony had such an influence that many came to hear him and were influenced by his teaching and preaching. However, the words of St. Francis to him were always evident in his deep spirituality and life of prayer which moved so many to Christ.

Saint Anthony became very influential in formulating a Franciscan theology of prayer. One of the specific traits of this theology is the primary role attributed to God’s love which envelopes us and from which emerges a spiritual knowledge that surpasses all others. Anthony’s theology stressed that it is in loving that we come to faith.  His practice of prayer emphasized the need to place oneself before God in an openness of heart that is receptive to the love of God. He expressed that, “Charity is the soul of faith; it gives light; without love faith dies.” Anthony’s emphasis on love also was the foundation of his outreach to the poor. During Anthony’s time, people were becoming increasingly insensitive to the needs of the poor. Anthony stressed that true riches were those of the heart which make good people merciful. He urged, “O rich people, befriend… the poor, welcome them into your homes; it will subsequently be they who receive you into the eternal tabernacles in which is the beauty of peace, the confidence of security and the opulent tranquility of eternal satiety.”

St. Anthony is well known for the depiction of him holding the Christ child in his arms. Since Franciscan theology emphasizes the humanity of the Lord, it concentrates on His nativity as well as His suffering and His crucifixion. This depiction of St. Anthony is much in keeping with the spirit of St. Francis.  It is also based on the recollection of a man who came upon Saint Anthony holding the infant Jesus in his arms. It is said that Saint Anthony forbade anyone to speak about this encounter until after his death. It does bespeak the depth of Anthony’s spirituality, simplicity and love of the Lord who came as one of us.

Anthony was canonized a saint by Pope Gregory IX in less than a year after his death. Indeed, his canonization took place even more quickly than that of St. Francis of Assisi. St. Francis, who died in 1226, was canonized a saint by Pope Gregory IX two years after his death. Thus, the Franciscan order quickly had two saints who were very similar in attitude and spirituality, but different in ministry and mission. Both speak profoundly from the same heart to our world today which needs to hear their message as it was heard during their own time. As we celebrate the feast of St. Anthony of Padua, this popular saint reminds us of what is most important in our lives. He places the loving Lord before us, who became one of us and gave His life on the Cross and reminds us that it is Christ who is the center of everything.  Pope Pius XII declared St. Anthony a doctor of the Church in January 1946, for his profound knowledge of scripture and his ability to preach to all people.

Last year, on the occasion of the eight hundredth anniversary of the Franciscan vocation of St. Anthony, Pope Francis wrote in a letter to the Franciscans, “May his example of sharing in the difficulties of families, the poor and disadvantaged, as well as his passion for truth and justice, still arouse in us today a generous commitment to give of ourselves as a sign of fraternity.  I am thinking most of all about the young: this saint, so ancient and yet so modern and brilliant in his insights, can be a model for new generations to follow, so that their journey may be made fruitful.”  The Pope concluded, “I hope that all of you may be able to say, along with St. Anthony: ‘I see my Lord!’  We must ‘see the Lord’ in the faces of all our brothers and sisters and offer them consolation, hope and the opportunity to encounter the Word of God, upon which they may anchor their lives.”