Living the Truth in Love – Mary Teaches Us to Live Eucharistically 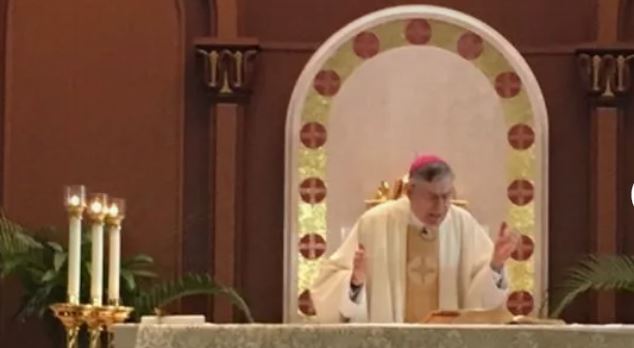 In a talk last week at an audience with young Syro Malabar Catholics, Pope Francis spoke some fitting words as we begin the Eucharistic revival within our country, which is to take place during the coming years. He said, “Mary teaches us also to live Eucharistically. In other words, to give thanks, to cultivate praise and not to be fixated only on problems or difficulties.” Mary is essential to our lives as believers in Christ, and she is central to a celebration and living out of the Eucharist.

Of the many gifts which Pope Francis has publicly given to the Church, one of them is his deep personal devotion to Mary and his encouragement of all those in the Church to have such a devotion.  In his Angelus address on the Solemnity of All Saints on November 1, 2014, the Pope stated that, “In the great assembly of saints, God has wanted to reserve the first place for the Mother of Jesus” and stressed that Mary “is the center of the Communion of Saints as the singular guardian of the bond of the Universal Church with Christ.”   During the Easter season, Pope Francis expressed that we recite the Regina Coeli prayer “with the emotion of children who are happy because their mother is happy” that the Lord has risen from the dead.  In his homily at the Mass at Aparecida for World Youth Day, the Pope expressed that he came “to knock at the door of Mary’s house” and emphasized that, “when the Church looks for Jesus, she always knocks at His Mother’s door and asks: ‘show us Jesus.’  It is from Mary that the Church learns true discipleship.”

One of the striking things of Pope Francis’ profound devotion to Mary is that it is simple in many ways.  Whenever he passes a statue or image of Mary, he kisses it and allows his hand to rest gently upon it.  Before and after pilgrimages outside of Rome, the Pope visits the Basilica in Rome dedicated to Mary, St. Mary Major, for a prayer and often to bring flowers.  His devotion to Mary is deep and theologically based but expresses itself in the manner of many pious Catholics.  He is not embarrassed to express a childlike devotion to the Blessed Mother in manners that display his humanity and simplicity of heart.  At the conclusion of an Angelus address in November 2013, Pope Francis held up a white medicine box with a drawing of the human heart upon it and containing a rosary.  The Pope expressed to the gathered crowd, “I want to recommend some medicine for all of you.  It’s a spiritual medicine.  Don’t forget to take it.  It’s good for your heart, for your soul, for your whole life.”

Pope Francis’s profound and simple devotion to Mary is at the heart of Gospel spirituality.  This is well expressed in his encyclical, Lumen Fidei.  Here he states, “As Virgin Mother, Mary offers us a clear sign of Christ’s divine Sonship.  The eternal origin of Christ is in the Father.  He is the Son in a total and unique sense, and so He is born in time without the intervention of a man.  As the Son, Jesus brings to the world a new beginning and a new light, the fullness of God’s faithful love bestowed on humanity.  But Mary’s true motherhood also insured for the Son of God an authentic human history, true flesh in which He would die on the Cross and rise from the dead.  Mary would accompany Jesus to the Cross (cf. Jn 19:25), whence her motherhood, would extend to each of His disciples (cf. Jn 19:26-27).”

These words from the Holy Father’s encyclical are theologically based in the Gospel of St. John.  Two important images run through this Gospel from its very beginning.  One is the image of “the home.”  From the prologue of the Gospel when it is proclaimed that “the Word became flesh and made his dwelling among us” (Jn 1:14), “the home” (dwelling) is mentioned over and over again in a subtle but powerful manner.  Jesus reveals that He has come to make a home in us so that we can make a home in Him.  The other image is that of “the hour.”  In the Gospel of St. John, Jesus refers to “his hour” over and over again as a reference to the hour of victory when He would give His life upon the Cross.  These two images wonderfully come together as Jesus hangs from the Cross with Mary and His beloved apostle, John, who represents the Church, beneath Him.  As Jesus gives John to Mary as her son and Mary to John as his mother, St. John the Evangelist proclaims, “And from that hour the disciple took her into his home” (Jn 19:27).  This is the time at which Mary becomes the Mother of the Church and of all Jesus’ disciples.

It is also at this point that Mary becomes the focal point for the apostles both at the Cross and after the Resurrection.  There can be no doubt that it was Mary who held them together in a unique way before the Holy Spirit came upon them at Pentecost.  As the apostles were still frightened and insecure before the coming of the Holy Spirit, it was Mary who was the one who encouraged them and even brought them together.  She perfectly understood the message of her Son as well as the meaning of His Cross and Resurrection.  It was likely Mary who brought the apostles together on different occasions such as when they gathered together on the eve of His Resurrection.  It was likely that it was Mary who sought out the absent apostle, Thomas, to be sure that he would be with the others the following week.  It was likely Mary who gathered the apostles together in the Cenacle and prepared them to receive the Holy Spirit, reminding them of her Son’s promise.  Mary handed on to the apostles what she treasured in her heart during the ministry of Jesus so they might better hand it on to others through the Church.

Pope Francis knows very well the primacy of the role of Mary within the Church and his devotion to her is living testimony of this.  He has expressed this reality on several occasions. While Mary was not an apostle, her role preceded that of the apostles.  Her role even preceded that of St. Peter among the apostles.  She is the perfect Christian who lived the message of her Son in a manner that taught by example.  Her role is that of holiness and intimacy with Christ which is the very mission of the Church.  The Catechism of the Catholic Church so poignantly teaches, “Mary goes before all in the holiness that is the Church’s ministry as the ‘bride without spot or wrinkle.’  That is why the ‘Marian’ dimension of the Church precedes the ‘Petrine.’”     This is certainly central to Pope Francis’s papacy.

As Pope Francis gives us such wonderful example of simple but profound devotion to our Blessed Mother, we realize more the centrality of Mary in leading us to Jesus.  As we look forward to celebrating the Eucharistic Revival within our nation, let us not hesitate to knock at the door of Mary so that the Lord may come more intimately into our homes at every hour especially through the celebration of the Eucharist.  Mary truly teaches us to live Eucharistically!