Living the Truth in Love – Mother Teresa: No Greater Love 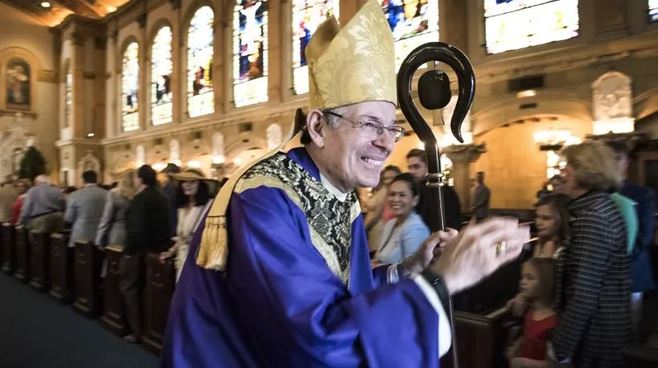 On Labor Day this past week, we celebrated the feast of a great woman of our times whose example, mission and message are so much needed today. The woman is Saint Teresa of Calcutta, formally canonized by Pope Francis six years ago on September 4, 2016. This year marks the 25th anniversary since the death of Mother Teresa.

Saint Teresa of Calcutta was a great proponent for the poor and needy in an extraordinary fashion, which caught the attention of many in the world and in government leadership. She was also a tremendous proponent for the unborn. She spoke many strong words against abortion including, “Any country that accepts abortion, is not teaching its people to love, but to use any violence to get what it wants.” Mother Teresa’s staunch defense of the life of the unborn was much in keeping with her proclamation of the sanctity of life on behalf of all men and women at every stage of life.

Saint Teresa of Calcutta always bore a smile upon her face. She was a woman of great joy and joy flowed from her giving of herself to others, especially the needy and the poor.  Saint John Paul II, who was a great advocate and friend of Mother Teresa, formally announced her beatification shortly after her death. She was a great influence on his pontificate, and he eagerly promoted her mission in the world. When Pope Francis canonized Mother Teresa, he referred to her smile in his homily for the Mass. He quoted the saint’s words, “Perhaps I don’t speak the language, but I can smile.”  She emphasized in her acceptance of the 1979 Nobel Peace Prize, “Let us always meet each other with a smile, for the smile is the beginning of love.”

While Mother Teresa was a woman who exuded great joy and a loving smile to all she encountered, she was by no means a stranger to suffering and pain in her life. Naturally, part of her suffering was due to the life of extreme poverty which she so eagerly lived. However, that suffering was not one that brought her distress or discomfort. It was surprisingly one that brought her great peace. She reflected, “We have no reason to be unhappy because we are loved by God Himself even in suffering.”

Another suffering that Saint Teresa of Calcutta faced was one encountered by many of the great saints of the Church. It was an intense feeling of distance from God.  After her death, her writings on this suffering were published. It is surprising to read how this joyful, smiling woman faced that pain of feeling an absence from God, which caused her the greatest suffering in her life. Such great saints as Saint John of the Cross, Saint Paul of the Cross and Saint Therese of Lisieux, were but some of the saints to face the same emptiness, which was similar to what our Lord experienced on the Cross.  This experience is often referred to as the dark night of the soul. It is comforting for us to know the Mother Teresa and the saints experienced this emptiness, which we sometimes experience in our lives to a lesser degree. However, this was a source of grace for them as they realized the Cross of the Lord was present to them in this experience.

Mother Teresa was fond of saying, “God does not demand that I be successful. God demands that I be faithful.  When facing God, results are non-important. Faithfulness is what is important.” Saint Teresa of Calcutta knew that God is not interested in our success but in our being faithful to Him. Our faithfulness to the Lord is the indication of our willingness to enter into a real relationship with Him, in which we realize our faults and limitations, but not get discouraged by them.  Faithfulness enables us to know the deep love of God for us, by experiencing His mercy and forgiveness. Mother Teresa experienced this faithfulness especially in her sufferings of the dark night of the soul that she experienced which, at face value, seemed to be a lack of success.

Saint Teresa of Calcutta’s words stand before us as a wonderful reminder of what the road to holiness is all about.  In a world so caught up in success, it is reassuring to know the success and achievement are not what life is all about. Many of us may already be experiencing that we are not always successful in what we intend to achieve. Our failures are a good example of realizing the limitations of our humanity. They are also a good opportunity for us to realize that God always goes beyond our limitations. He became one of us through Christ in our human nature and raises us to His divinity through His love and mercy. Again, it is our faithfulness and willingness to persevere that are important and not our successes, especially in the eyes of God.

Mother Teresa never expected to be the example and spiritual leader that she was to the world. Of all things, she never expected to be canonized a saint. Her founding of the Missionaries of Charity was a great blessing for the world. This congregation carries out in a concrete manner, the concern and mercy that Mother Teresa gave to the poor, the needy, the abandoned, the elderly and the unborn. All of these would certainly seem not to have experienced success in their lives. Nevertheless, they were successful as Mother Teresa helped them to realize God’s faithfulness to them and encourage their faithfulness to God.

On the occasion of the 25th Anniversary of the death of Mother Teresa, the Knights of Columbus have produced a movie,  Mother Teresa: No Greater Love, regarding the life and mission of this great saint. The film’s premiere took place in Rome on August 29. Pope Francis highly praised the film. In a letter to the Knights of Columbus, he wrote, “Thank you for all the efforts made to capture the life of this saint, whose life and testimony have borne much fruit.”  He expressed that the documentary will “do much good to all those who watch it and arouse the desire for holiness.”  Mother Theresa: No Greater Love will be in theaters October 3–4 in many locations across the United States. Certainly, the impact of Mother Teresa is one that has made a difference in the lives of so many. In a world and society broken by so many disappointments, lack of direction and violence, Mother Teresa stands as a living example of healing. In her words, “We are not numbers. We are children of God. We have been created for a purpose, for greater things: to love and to be loved.”

Saint Teresa of Calcutta – pray for us!