Living the Truth in Love – The Declaration Affirmed by the Popes 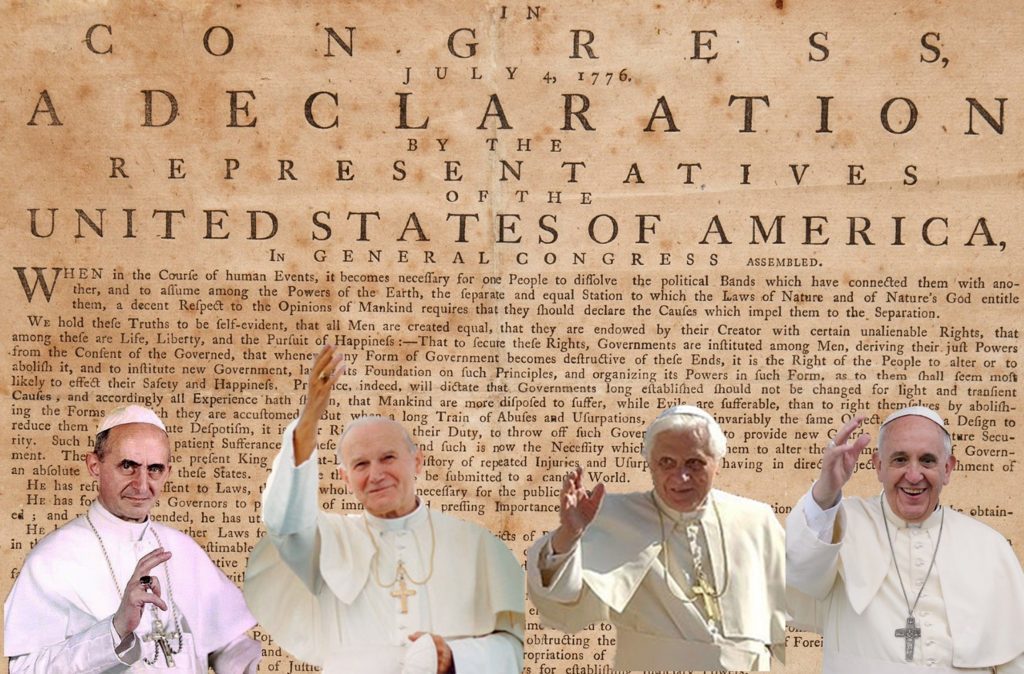 As we celebrate the Fourth of July this year on the two hundred forty-fifth Anniversary of the Declaration of Independence, we give thanks to God for our great nation which came into existence on the affirmation that all persons are created equal and “that they are endowed by their Creator with certain unalienable rights, that among them are life, liberty and the pursuit of happiness.”  During its existence over the years, our nation has grown in its birthmark of recognizing the rights of every person, realizing that it always has a great deal more to accomplish in its living out its birthright.  The present state of our nation is fractured by much anger, division and confusion which need to be addressed in a manner apart from divisive political dominance and more in a manner as envisioned by our founding fathers in the Declaration of Independence.  The Declaration which rejected a king who suppressed true liberty, realizes that true democracy is not a monarch of politics which does the same.  We are never free when politics rules the basic right to life of an unborn child or that of any vulnerable person or when it permits inequality, racism, lack of respect for religious freedom, unfairness to the immigrant, the original citizen of this country, and so many other injustices.  We are not ruled by political correctness but by an absolute truth as articulated by our Creator.  Politics does not determine truth but must be governed by it.

For more than the past fifty years, in which a great deal has occurred within our nation, we have been visited by four popes.  In these visits, the popes have made a tremendous impact upon our nation by the message they have given to us and to so many of our citizens of different immigrant backgrounds.  St. Pope Paul VI made the first historic visit to our nation in 1965, followed by seven visits of St. Pope John Paul II, from 1979 – 1999, a visit of Pope Benedict XVI in 2008, and the most recent visit by Pope Francis in 2015.  I personally was blessed to have been present for all of these visits and know the great impact they had upon me as well as our nation.  It is no surprise that each of these popes, in their visits, extolled our nation and the Declaration of Independence upon which it was founded.  As we celebrate the Fourth of July, it is beneficial to reflect upon their words to our nation and, in a true sense, we can say that they affirmed the Declaration of Independence.

St. Pope Paul VI made history when he visited New York in October 1965.  This was the first papal visit to the west and the first time a pope had been out of Rome since 1809.  Pope Paul VI met President Lyndon Johnson in New York and during this epic visit celebrated Mass at Yankee Stadium and addressed the United Nations.  The union of Rome and the United States in this visit marked the spirit that underlines the values that are at the core of the Church and our nation.  The pope expressed this well in his homily at Yankee Stadium when he said: “We feel too, that the entire American people is here present, with its noblest and most characteristic traits: a people basing its conception of life on spiritual values, on a religious sense, on the rule of law, on freedom, on loyalty, on work, on the respect of duty, on family affection, in generosity and courage.  We pay honor to the human and civil virtues of this great people, and in these virtues, we recognize valuable derivations from Christian values, which we hope will ever remain living and active, safeguarding the American spirit from those dangers which prosperity itself can entail, and which the materialism of our day can make even more menacing.  From its brief but heroic history, this young and flourishing country can derive lofty and convincing examples to encourage it in its future progress.”  In his words to the United Nations, St. Paul VI referred to President John F. Kennedy as “a great man who is no longer with us” and quoted his words: “Mankind must put an end to war, or war will put an end to mankind.”  The pope followed up with his own renown words “Never again war, never again war!”

St. John Paul II made seven visits to the United States during the course of his pontificate.  He met with Presidents Jimmy Carter, Ronald Reagan, George H. Bush, and Bill Clinton during the course of his visits.  He literally traveled from the east coast to the west coast during these historic visits proclaiming the Gospel and praising the value of American ideals.  There are so many words of St. John Paul II during his visits here that are moving reflections for our celebration of the Declaration of Independence.  His farewell address at the airport of Detroit in 1987, exemplifies this very well.  He proclaimed: “America, your deepest identity and true character as a nation is revealed in the position you take towards the human person.  The ultimate test of your greatness is the way you treat every human being, but especially the weakest and most defenseless ones.  The best traditions of your land presume respect for those who cannot defend themselves.  If you want equal justice for all, and true freedom and lasting peace, then, America, defend life!  All the great causes that are yours today will have meaning only to the extent that you guarantee the right to life and protect the human person: feeding the poor and welcoming refugees; reinforcing the social fabric of this nation; promoting the true advancement of women; securing the rights of minorities; pursuing disarmament, while guaranteeing legitimate defense; all this will succeed only if respect for life and its protection by the law is granted to every human being from conception until natural death. … My final prayer is this: that God will bless America, so that she may increasingly become – and truly be – and long remain one nation, under God, indivisible, with liberty and justice for all.”

Pope Benedict XVI visited the United States in April 2008.  His was also an historic visit which was filled with a great deal of enthusiasm on his part as well is on the part of all those who greeted him.  He visited President George W. Bush at the White House and during this occasion  proclaimed the following words: “I am happy to be here as a guest of all Americans.  I come as a friend, a preacher of the Gospel and one with great respect for this vast pluralistic society. … From the dawn of the Republic, America’s quest for freedom has been guided by the conviction that the principles governing political and social life are intimately linked to a moral order based on the communion of God the Creator.  The framers of this nation’s founding document drew upon this conviction when they proclaim the ‘self-evident truth’ that all men are created equal and endowed with inalienable rights grounded in the laws of nature and of nature’s God.”  The pope later went on to say: “Democracy can only flourish, as your founding fathers realized, when political leaders and those whom they represent are guided by truth and bring the wisdom of their moral principle to decisions affecting the life and future of the nation.”  Indeed, Pope Benedict XVI’s words boldly affirm the purpose of our nation and remind us, on the Fourth of July, of what we are all about and why our nation came into existence.

The most recent visit of a pope to the United States is that of Pope Francis in September 2015.  His presence truly was one that is fresh in the memory of our nation and that brought with it a message of great respect for the nation in which we live as well as a call to continue respect for all people, the foundational principle of our nation.  He met with President Barack Obama at the White House and addressed him with the words: “I am deeply grateful for your welcome in the name of all Americans.  As the son of an immigrant family, I am happy to be a guest in this country, which was largely built by such families.”  Francis visited Independence Hall and there spoke these words so fitting for the celebration of the Fourth of July: “One of the highlights of my visit is to stand here, before Independence Hall, the birthplace of the United States of America.  It was here that the freedoms which define this country were first proclaimed.  The Declaration of Independence stated that all men and women are created equal, that they are endowed by their Creator with certain inalienable rights, and that government exists to protect and defend those rights.  These ringing words continue to inspire us today, even as they have inspired people throughout the world, to fight for the freedom to live in accordance with their dignity.”

As we celebrate the Fourth of July on the anniversary of the Declaration of Independence, there is no question that the popes that have visited the United States confirm what is contained in this revolutionary document.  At a time when there is division, anger, and confusion in the midst of a tyranny seeking to establish politics, not truth, as the monarch, we need to affirm what is contained in the Declaration of Independence by respecting the fundamental rights of every person made in the image and likeness of God.  In keeping with the  spirit of President Kennedy’s words, a war of politics is a war that will put an end to our nation.  Pope Francis’ words in his address to the joint session of Congress during his visit emphasized this: “All political activity must serve and promote the good of the human person and be based on his or her dignity.  ‘We hold these truths to be self-evident, that all men are created equal, that they are endowed by their Creator with certain unalienable rights, that among these are life, liberty and the pursuit of happiness’ (Declaration of Independence, 4 July 1776).  If politics must truly be at the service of the human person, it follows that it cannot be a slave to the economy and finance.  Politics is, instead, an expression of our compelling need to live as one, in order to build up as one the greatest common good: that of a community which sacrifices particular interest in order to share, in justice and peace, its goods, its interest, it’s social life.”

We give thanks to God for our great nation!  A Blessed Fourth of July!