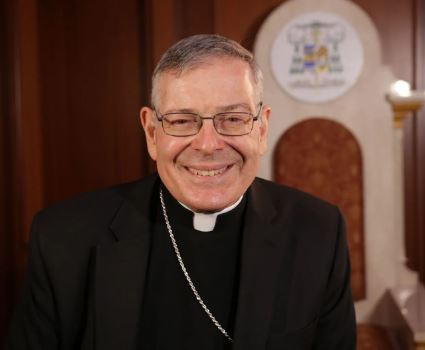 This year was a significant one for Saint Ignatius as it was the four hundredth anniversary of his canonization as a saint.  It also was the five hundredth anniversary of an injury caused to him by a cannonball during the battle of Pamplona.  This injury was significant for the eventual process of his conversion to Jesus Christ and his eventual founding of the Jesuit Order, the Society of Jesus.  One of the many treats found at the celebration which took place at the Cathedral, were delicious chocolate ice cream cakes made in the form of cannonballs to commemorate the occasion.

Saint Ignatius was born on October 23, 1491, in the municipality of Azpeitia at the Castle of Loyola in what is today the Basque Country of Spain.  The youngest of thirteen children and part of an aristocratic family, he was very much attracted to the military life and was taken by a great love for martial exercises and a desire for fame.  Ignatius was seriously injured in 1521 by a cannonball which broke one of his legs and wounded the other.  During his convalescence, because there were no novels on hand, he spent his time reading a life of Christ as well as those of the saints.  He began to find great peace in this and his conversion to Christ began.  In 1534, at the age of forty-three, he and six others committed themselves to a religious manner of living and four years later founded the Society of Jesus, the Jesuits, which was approved by Pope Paul III.  Ignatius was elected to serve as the first general.

Based on the vision of Saint Ignatius, the Jesuits became a missionary group with great apostolic zeal.  The Spiritual Exercises of Saint Ignatius became the foundation for Jesuit spirituality with the discernment of spirits as an important part of its method.  The motto of the Jesuits became Ad maiorem Dei gloriam, a Latin phrase translated as, “For the greater glory of God.”  The monogram, IHS, an abbreviation for the name of Jesus in Greek, became the center of its coat of arms, which is prominent in Pope Francis’ coat of arms.  The spirituality of the Jesuits is a rigorous one centered on Christ, the Trinity, and the Eucharist.  Saint Ignatius was a man of God who put Christ before all else and for whom the daily celebration of the Eucharist was the heart and crowning point of his day.  He gave to his congregation a precious spiritual legacy meant for the service of the entire Church.

It is quite interesting to note that at the time of his conversion Ignatius proclaimed, “I want to be a saint like Saint Francis.”  The apostolic zeal and missionary fervor of Saint Francis of Assisi were a profound influence on Saint Ignatius and thus are part of the fabric of the Jesuit vocation.  It is also most interesting that Saint Ignatius formed in his congregation a special bond to the Pope to whom its members made a fourth promise of obedience.  Because of the black cassock which the Jesuits wore, the superior general of the Jesuits became known as the “Black Pope.”  How paradoxical is this for us today with Pope Francis!

The foundation of the spiritual life of the Jesuits is the Spiritual Exercises written by Saint Ignatius.  The central part of the Spiritual Exercises focuses on the importance of daily discernment and examination of conscience.  We are faced with many choices and situations within our lives which require discernment regarding three essential questions.  What does God want me to do?  How am I fooled by the devil who wants me to do the opposite?  Where is God present and visible in my life today?  This process of discernment is essential in putting our lives in the proper perspective and in finding the joy which God wants us to possess.  Discernment, which was a central part of Saint Ignatius’ insight during his convalescence, was the foundation of his spirituality.  It is obvious that such discernment is also essential to the vision and spirituality of Pope Francis.

Just two days before the Feast of Saint Ignatius, Pope Francis addressed the question of the importance of discernment as envisioned by Saint Ignatius in the papal press conference which took place on his way home from his missionary visit to Canada.  The Pope expressed: “This I think is the religious way of life of a Jesuit: Being in spiritual discernment to make decisions, to choose ways of working, to discern compromises as well.  Saint Ignatius in this way was very nuanced because it was his own experience of spiritual discernment that led him to conversion.  And the Spiritual Exercises are really a school of discernment.  By vocation, a Jesuit must be a man of discernment:  Discerning situation, discerning conscience, discerning decisions to be made.  And for that he must be open to whatever the Lord asks of him. This is our kind of spirituality.”

As we look around our world and culture today, we see and experience a true lack of discernment.  So many decisions are made, not based on discernment especially in regard to God’s will, but on politics and popular preference.  Saint Ignatius lived in the world that also ignored true discernment in terms of God’s presence.  This is one of the reasons he founded the Society of Jesus.

Saint Ignatius died at the young age of 64 on July 31, 1556, from a form of malaria which was prevalent at the time.  His illness and death were not easy ones, but his discernment enabled him to be focused on Christ and what really mattered.  His canonization affirmed his sanctity, and he is a good model for all Christians especially, in regard to our need to examine our conscience and make proper discernment.

We embrace this great saint of Loyola in our Diocese of Palm Beach where he is the patron of our Cathedral.  May we also, like Pope Francis, embrace the spirituality of Saint Ignatius in our own lives and daily existences so that Christ may become more and more our center and that His joy may be our own.

The famous prayer of Saint Ignatius is a good one at any time: “Lord Jesus Christ, take all my freedom, my memory, my understanding, and my will.  All that I have and cherish you have given me.   I surrender all to be guided by your will.  Your grace and your love are wealth enough for me.  Give me these, Lord Jesus, and I ask for nothing more.”