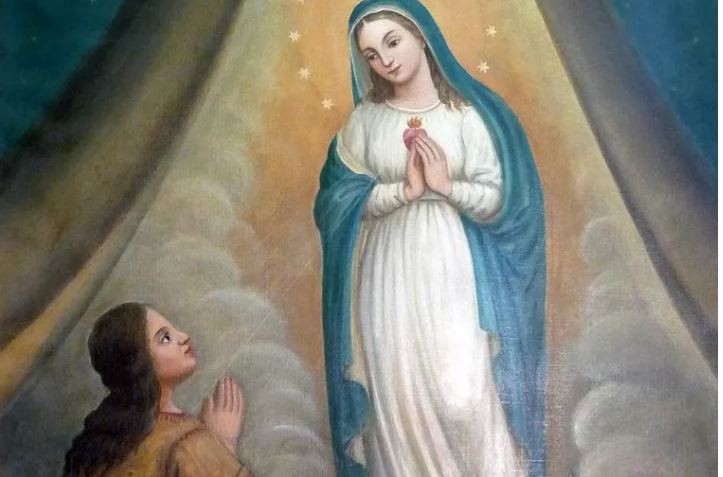 Mary, also known as St. Mary the Virgin, the Blessed Virgin Mary, Saint Mary, Mary Mother of God or the Virgin Mary is believed by many to be the greatest of all Christian saints. The Virgin Mother “was, after her Son, exalted by divine grace above all angels and men.”

Mary is venerated with a special cult, called by St. Thomas Aquinas, hyperdulia, as the holiest of all creatures. The main events of her life are celebrated as liturgical feasts of the universal Church.

Mary’s life and role in the history of salvation is foreshadowed in the Old Testament, while the events of her life are recorded in the New Testament. Traditionally, she was declared the daughter of Sts. Joachim and Anne. Born in Jerusalem, Mary was presented in the Temple and took a vow of virginity. Living in Nazareth, Mary was visited by the archangel Gabriel, who announced to her that she would become the Mother of Jesus, by the Holy Spirit.

She became betrothed to St. Joseph and went to visit her cousin, Elizabeth, who was bearing St. John the Baptist. Acknowledged by Elizabeth as the Mother of God, Mary intoned the Magnificat.

When Emperor Augustus declared a census throughout the vast Roman Empire, Mary and St. Joseph went to Bethlehem, his city of lineage, as he belonged to the House of David. There Mary gave birth to Jesus and was visited by the Three Kings.

Mary and Joseph presented Jesus in the Temple, where St. Simeon rejoiced and Mary received word of sorrows to come later. Warned to flee, St. Joseph and Mary went to Egypt to escape the wrath of King Herod. They remained in Egypt until King Herod died and then returned to Nazareth.

Nothing is known of Mary’s life during the next years except for a visit to the Temple of Jerusalem, at which time Mary and Joseph sought the young Jesus, who was in the Temple with the learned elders.

The first recorded miracle of Jesus was performed at a wedding in Cana, and Mary was instrumental in calling Christ’s attention to the need. Mary was present at the Crucifixion in Jerusalem, and there she was given into John the Apostle’s care. She was also with the disciples in the days before the Pentecost, and it is believed that she was present at the resurrection and Ascension.

No scriptural reference concerns Mary’s last years on earth. According to tradition, she went to Ephesus, where she experienced her “dormition.” Another tradition states that she remained in Jerusalem. The belief that Mary’s body was assumed into heaven is one of the oldest traditions of the Catholic Church.

Pope Pius XII declared this belief Catholic dogma in 1950. The four Catholic dogmas are: Mother of God, Perpetual virginity of Mary, the Immaculate Conception and Assumption of Mary. The feast of the Assumption is celebrated on August 15. The Assumption was the bodily taking up of the Virgin Mary into Heaven at the end of her earthly life. According to Pope Pius XII, the Virgin Mary “having completed the course of her earthly life, was assumed body and soul into heavenly glory.”

In 1854, Pope Pius IX proclaimed the dogma of the Immaculate Conception – that Mary, as the Mother of the Second Person of the Holy Trinity, was free of original sin at the moment of her conception. The feast of the Immaculate Conception is celebrated on December 8. The birthday of Mary is an old feast in the Church, celebrated on September 8, since the seventh century.

Other feasts that commemorate events in the life of the Blessed Virgin Mary are listed in the Appendices. Pope Pius XII dedicated the entire human race to Mary in 1944. The Church has long taught that Mary is truly the Mother of God .

The Blessed Virgin Mary may be taken as a patroness of any good activity, for she is often cited as the patroness of all humanity. Mary is also associated with protecting many occupations and locations.

St. Paul observed that “God sent His Son, born of a woman,” expressing the union of the human and the divine in Christ. As Christ possesses two natures, human and divine, Mary was the Mother of God in his human nature.

This special role of Mary in salvation history is clearly shown in the Gospel where she is seen constantly at her son’s side during his soteriological mission. Because of this role, exemplified by her acceptance of Christ into her womb, her offering of him to God at the Temple, her urging him to perform his first miracle, and her standing at the foot of the Cross at Calvary Mary was joined fully in the sacrifice by Christ of himself.

Pope Benedict XV wrote in 1918: “To such an extent did Mary suffer and almost die with her suffering and dying Son; to such extent did she surrender her maternal rights over her Son for man’s salvation, and immolated him – insofar as she could in order to appease the justice of God, that we might rightly say she redeemed the human race together with Christ.”

Mary is entitled to the title of Queen because, as Pope Pius XII expressed it in a 1946 radio speech, “Jesus is King throughout all eternity by nature and by right of conquest: through him, with him, and subordinate to him, Mary is Queen by grace, by divine relationship, by right of conquest, and by singular election.”

Mary possesses a unique relationship with all three Persons of the Trinity, thereby giving her a claim to the title of Queenship. She was chosen by God the Father to be the Mother of his Son; God the Holy Spirit chose her to be his virginal spouse for the Incarnation of the Son; and God the Son chose her to be his mother, the means of incarnating into the world for the purposes of the redemption of humanity.

This Queen is also our Mother. While she is not our Mother in the physical sense, she is called a spiritual mother, for she conceives, gives birth, and nurtures the spiritual lives of grace for each person. As Mediatrix of All Graces, she is ever present at the side of each person, giving nourishment and hope, from the moment of spiritual birth at Baptism to the moment of death.

In art, Mary is traditionall portrayed in blue. Her other attributes are a blue mantle, crown of 12 stars, pregnant woman, roses, and/or woman with child.

We ask you, humbly, to help.

Hi readers, it seems you use Catholic Online a lot; that’s great! It’s a little awkward to ask, but we need your help. If you have already donated, we sincerely thank you. We’re not salespeople, but we depend on donations averaging $14.76 and fewer than 1% of readers give. If you donate just $5.00, the price of your coffee, Catholic Online School could keep thriving. Thank you. Help Now >

Hundreds of thousands of pieces of Marian artwork and sculptures have been created over the years from the best and most brilliant artists, like Michelangelo and Botticell, to simple peasant artists. Some of the most early examples of veneration of Mary is documented in the Catacombs of Rome. Catacomb paintings show Mary the Blessed Virgin with her son.

The confidence that each person should have in Mary was expressed by Pope Pius IX in the encyclical Ubipriinum : “The foundation of all our confidence. . . is found in the Blessed Virgin Mary. For God has committed to Mary the treasury of all good things, in order that everyone may know that through her are obtained every hope, every grace, and all salvation. For this is his will, that we obtain everything through Mary.”Continue reading about Mary the Blessed Virgin