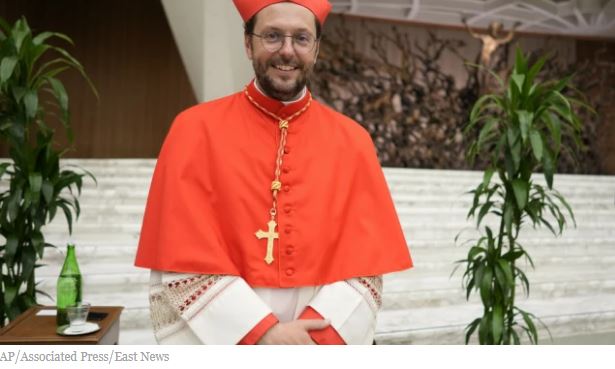 In this exclusive interview, the youngest cardinal in the Sacred College, Cardinal Marengo shares his experience of being raised to the red.

He was the youngest bishop in the world, and has now become the youngest cardinal in the Sacred College as of this past August 27, at the age of 48. Cardinal Giorgio Marengo, an Italian Consolata Missionary and the Apostolic Prefect of Ulaanbaatar, oversees a Catholic community of about 1,400 baptized people. He came to Rome with a small Mongolian delegation of three people—a young priest (the first from the country) and two young catechists—and talked to I.MEDIA about his emotions upon entering the Sacred College.

What is your personal feeling about all this media curiosity surrounding “this young cardinal from a rather strange country,” from a European point of view?

I’m not used to so much attention. I’m not in my element! I’m used to living rather hidden, so it’s not easy to manage all of this. But I feel gratitude and joy in sharing these experiences of the Catholic communities in Mongolia. One of the collateral effects of this appointment is precisely to make the Christian communities of Mongolia better known.

With your missionary experience bringing a “breath of fresh air” from a distant country, do you have the impression that something must change in the relationship between Rome and the local Churches—that these lands must be seen with new eyes?

Yes, it’s important to give greater weight to experiences that would otherwise risk remaining more marginal. Speaking of “fresh air,” we have the Siberian wind which is really cold! But I believe that any experience in the Church can help. When we gather experiences, we are enriched. We have much to learn from the universality of the Church.

It’s a two-way street. We offer what we are, with a lot of simplicity, poverty, and smallness, which have a lot to say to Europe in particular, but we also listen to the universal Church. It’s an important experience for our Catholic faithful in Mongolia to understand that the Church isn’t just a small community, but the Body of Christ that is present in the whole world.

Does the creation of a cardinal for Mongolia also represent a signal for the whole of Asia, to show that these territories on the borders of Russia and China are also mission lands?

Yes, it shows the importance of Christianity in Asia. It’s an experience marked by the fact of being a minority, but in a society that has developed a great capacity for dialogue. This decision of the Holy Father also takes into account the fact that Mongolia is a country that has known, in its history, how to promote peace and harmony between populations of different origins. This is also a significant aspect.

How is your small Church living the Synodal Way, which is reaching a new continental stage?

We had the grace of living this synodal call at the same time as the celebration of the 30th anniversary of the presence of our Church in Mongolia. So we decided to unite these two approaches, celebrating this anniversary from a synodal perspective. This was our approach: to pause, to thank and praise God for the gift of faith and the Gospel, to try to project ourselves into the future by imagining certain paths, to learn from the mistakes we have made, to ask each other for forgiveness…

I believe that all this is part of synodality. We held a pastoral week in June during which all the members of our Church gathered around the Gospel, the Word of God, the Eucharist, in a fraternal dialogue that helped us to live synodality. For us, this was a providential crossroads.

Would a visit of the Pope to Mongolia be possible?

Yes, we dream about it and we are waiting for him to come with great anticipation, whenever he wants!