No Meat Fridays during Lent 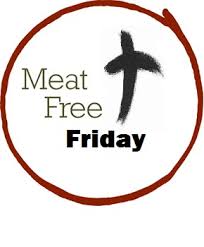 Q: Why don’t Catholics eat meat during Lent? What’s the point? And why doesn’t fish count as meat?

A: So, what you’re asking about is the Church’s regulation with regard to abstinence. (No, not that kind of abstinence). This kind of abstinence refers to the rule binding all Catholics 14 years old until death to abstain from meat on Ash Wednesday, Good Friday and all the Fridays of Lent. There are always exceptions for people who are ill, who need the nourishment that comes from meat, or those who would give offense to a host who unknowingly served meat on one of these days.

The “why Friday?” question is pretty obvious: it is one way we commemorate the Passion and death of Our Savior Jesus Christ. But the question of “why meat?” seems to come up again and again.

There are documents that indicate that meat was singled out as being a food Christians occasionally abstained from since the first century. This has nothing to do with the Catholic Church “requiring abstinence from foods” that St. Paul talks about in his letter to Timothy (1 Timothy 4:3). In that letter, St. Paul is referring to the practice of maintaining Jewish dietary laws. The foods prohibited by God in the Old Testament were declared “unclean” and this is why they were forbidden. The Catholic Church’s practice of occasionally not eating meat has nothing to do with this perspective. It is precisely because meat is so good that we are asked to give it up at certain times. It wouldn’t make a whole heck of a lot of sense if we offered something we considered bad as a sacrifice to God.

…meat was singled out because it is associated with celebrations and feasts.

More to the point, meat was singled out because it is associated with celebrations and feasts. I understand that there has been a slight cultural shift in the last number of years with more and more people eating a more vegetarian diet, but most of us still base the food we eat during celebrations around a meat entrée (Thanksgiving turkey, Easter ham, Fourth of July brat, burger and a steak). A day devoted to remembering Christ’s Passion doesn’t seem like a day to feast. Interestingly enough, the day we celebrate the Resurrection is a day for feasting (and we get one of those every single week: Sunday).

On top of all of that, meat has often been a luxury in many cultures. People didn’t always have a McDonald’s Dollar Menu, and meat cost a bit more. Maintaining a spirit of simplicity, people turned to other, less expensive fare. But what’s included when we are asked to abstain from meat? Well, throughout the 2,000 year history of the Church, there have been varying definitions over what exactly constitutes abstinence from meat. In some regions of the world, Catholics abstained from all forms of meat and all animal products, while others made exceptions for food like fish.

The brilliant thing in all of this is that this is simply a discipline of the Church. It can change. And it has changed. In a 1966 document, “Apostolic Constitution on Penance”, Pope Paul VI reorganized and clarified the Church’s practice. He determined that abstinence forbids the use of meat, but not of eggs, milk products or condiments made of animal fat. Moral theologians have taken varying sides on this, but it seems that gravies, broths, and soups cooked or flavored with meat are permissible. It would seem a bit “off” to me to take this so far as to serve beef barley soup at the Lenten Soup Suppers, but one rule of thumb could be “if you can drink it through a straw, you’ve got nothing to worry about”. (You may be completely missing the point as you sip on your pepperoni milkshake, but I guess that’s why we have a distinction between the spirit and the letter of the law.)

The heart of holiness is love, and the way we express our love is through obedience.

So what about fish? How’d that one slide by? I mean, it seems like meat, right? The thing is, fish never really had the same status as the flesh of mammals and birds. It isn’t associated with celebrations (in fact, I happen to associate having to eat fish with those other things parents force their children to do in order to “build character”). In Pope Paul VI’s aforementioned document, he uses a particular word, carnis, to indicate the type of food from which we are to abstain. In English, “meat” can refer to any flesh, but the Latin specifically refers to mammals and birds only. Fish was never considered as being on the same level. (I have even heard one theory that fish weren’t included because some pope once made a deal with the fishermen of Rome so they could all make a bundle off of fish sales. That isn’t true, but when talking with conspiracy theorists, logic doesn’t really play a role. It is like arguing with an idiot; they drag you down to their level and then beat you with experience.)

But I still don’t see the point! I don’t even like meat, and I would rather eat fish! This isn’t difficult at all! I like that statement, because it strikes at the heart of why we are doing this. God doesn’t need us to give up meat. God doesn’t need us to have a filet-o-fish on Fridays. What does God want? For you to suffer? Is the point of Lent to just grit your teeth and bear it, and if you happen to like fish then you just aren’t going to get holier because holiness comes from pain? NO! The heart of holiness is love, and the way we express our love is through obedience. Abstaining from meat won’t make a person closer to God. But having a posture of obedience to the Church that Christ established will. This happens to be what the Church asks us to do. If the Church changed the discipline and told us to eat meat on all Fridays during Lent, then obedience to that discipline would help us to grow. Why? Because we sinners like to take the rebellious pose. We like to do it our way. It is hard for us to be told what to do. But to submit is to place our lives in our Father’s hands.

If you resent having to give up meat because you see it as pointless, look more deeply into what prompts you to think that way. Is it really the Spirit of Christ? Or a spirit of rebellion? One of those roads leads to God. The other leads in the opposite direction.

Fr. Mike SchmitzFather Mike Schmitz is the chaplain for Newman Catholic Campus Ministries at the University of Minnesota Duluth. He also serves as the Director of the Office of Youth Ministry for the Diocese of Duluth. You can listen to Fr. Mike’s homilies in iTunes. Full Bio, Meet Fr. Mike