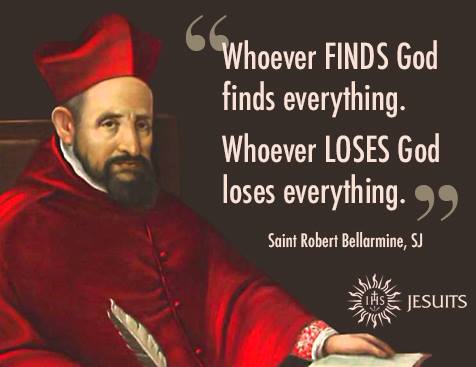 He was one of the most brilliant men of his age, but he was a humble man and an exemplary priest who lived a virtuous and austere life.

On September 17, 1621, exactly 500 years ago, the Cardinal-priest Robert Bellarmine died in Rome. Why did Pope Pius XI declare him a saint in 1930? And why did the same pope declare him a Doctor of the Church in 1931?

Bellarmine was born into a noble but relatively poor family in Montepulciano, Italy. When he was only twelve years old, his uncle was elected pope and became Pope Marcellus II. But that reform-minded pope didn’t have time to further encourage his nephew to become a priest. Marcellus died after only twenty-two days in office.

Bellarmine learned from his pious mother the importance of prayer, fasting, and almsgiving. His father, on the other hand, wanted him to be a politician. But Bellarmine was a good student at the Jesuit schools to which his father sent him, and he decided to become a Jesuit priest himself – over his father’s objections – when he was about eighteen years old.

Bellarmine spent the next ten years being educated at some of the best universities in Europe, mostly Jesuit centers, before he was ordained a priest in Belgium. He served as a theology professor for a time, but it didn’t take long for everyone – including another pope – to recognize that Bellarmine was one of the most brilliant men alive. Pope Sixtus V and his successors quickly put him to work for the Church.

It’s not hard to see, in retrospect, why the Church eventually declared Bellarmine a Doctor of the Church. Bellarmine had a photographic memory as well as intelligence and self-discipline, and he was willing to tackle the most contentious problems of the day. His important work, Disputationes de Controversiis Christianae Fidei (typically referred to as The Disputations or The Controversies in English) was such an excellent defense of the Catholic faith against Protestantism that it was illegal to own a copy of it in anti-Catholic Elizabethan England.

Bellarmine also wrote two catechisms to help Catholics learn about their faith, and those books became the standard catechetical texts from the seventeenth to the nineteenth century in many countries.

Bellarmine also had famous friends. He was a mentor to a Jesuit novice who was particularly devout and who became fatally ill after caring for plague victims; that friend was Saint Aloysius Gonzaga. When the bishop of Geneva needed help to obtain approval from the Church for a new order of religious sisters that he had founded, Saint Robert assisted him. The bishop was Saint Francis de Sales.

When an Italian scientist began publishing astronomical theories that scandalized some Christians, Bellarmine befriended the man, corresponded with him to understand his theories, and even defended him within the Church. When the friend’s pride led him into a direct confrontation with the Church, Bellarmine was given the unpleasant task of delivering the Church’s order to his friend, Galileo Galilei, which condemned him for continuing to teach his theories about heliocentrism. Bellarmine prayed for Galileo throughout the whole controversy.

What do you do if you’re the pope and have such a highly qualified cardinal in your curia? Bellarmine was the one selected to find a delicate, diplomatic resolution when political tensions between the pope and King James I of England heated up. A pope also appointed Bellarmine prefect of not one, but two Vatican congregations. He was such an obvious and excellent candidate for the papacy that on two occasions he narrowly escaped being named pope himself.

Despite what must have been endless temptations to pride, greed, and every other deadly sin due to his constant contact with men of great power and questionable morality, Robert was a humble man and an exemplary priest. He lived a virtuous and austere life. He prayed, fasted, and gave alms, just as he encouraged the Catholic faithful to pray, fast, and give alms in his homilies. Though he worked with kings and princes, his care for the poor was practical and personal.

For example, when food was scarce in the city in which he was living, he ordered the expensive tapestries on the walls of his residence to be sold and the proceeds to be given to the poor. “The walls won’t catch cold,” he told his annoyed servants. And he accomplished his many great works for the Church despite the fact that he quietly suffered from health problems all his life.

On the 500th anniversary of his death, perhaps we should ask the Lord to send us more holy clergymen like Saint Robert Bellarmine.

If you value the news and views Catholic World Report provides, please consider donating to support our efforts. Your contribution will help us continue to make CWR available to all readers worldwide for free, without a subscription. Thank you for your generosity!

About Dawn Beutner 18 ArticlesDawn Beutner is the author of Saints: Becoming an Image of Christ Every Day of the Year from Ignatius Press and blogs at dawnbeutner.com.