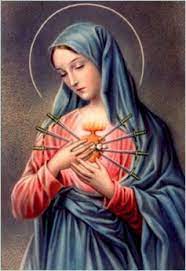 Yet on Oct. 13, 1917, during her last apparition and the Miracle of the Sun at Fatima, she appeared not only as Our Lady of the Rosary and As Our Lady of Mount Carmel, but also as Our Lady of Sorrows.

In October Our Lord will come, as well as Our Lady of Sorrows and Our Lady of Mt. Carmel. St. Joseph will appear with the Child Jesus to bless the world, Mary told the three children during her Sept. 13 apparition, preparing them for her next visit. More on the connection later.

Her feast of Our Lady of Sorrows falls on Sept. 15. Wisely, it links to the Feast of the Exaltation of the Holy Cross the day celebrated before, on Sept. 14. The connection is most obvious.

But not so obvious are the promises Our Lady made for those with a devotion to her seven sorrows. And not so obvious is what those Seven Sorrows are even though the devotion has been around for many centuries.

We’ll look at the promises and the seven sorrows in a minute, but first, here’s a quick glance at where the devotion originated.

The solid connection between both feasts really begins at the Crucifixion.

The Church has celebrated the Exaltation of the Holy Cross from 326, when on Sept. 14 St. Helen discovered Christ’s True Cross on Calvary. The feast became prominent in the west in the 7th century after Heraclius rescued the True Cross from pagans who took it from Jerusalem in 627

Also in the 4th century Ephrem the Syrian and St. Ambrose celebrated and venerated Mary’s sorrows and compassion. In 1239 the sorrows of Mary standing under the cross became the main devotion of the new order, the Servants of Mary or Servites. In his major book The Glories of Mary, St. Alphonsus Ligouri explains how in that year Our Lady appeared to seven of her servants “with a black garment in her hand, and told them that if they wished to please her, they should often meditate upon her dolors (sorrows).” These seven became the founder of Servants of Mary, the Servites.

The Holy See granted them a feast of the Seven Dolors. Centuries later, in 1814, the Holy See placed the feast of Our Lady of Sorrows on the Roman calendar.

These are the Seven Sorrows of Mary:

1, The prophecy of Simeon

2. The Flight into Egypt

3. The Loss of Jesus for Three Days in the Temple

4. Meeting Jesus on his way to Calvary

5. Jesus’ Crucifixion and Death of Jesus

6. Jesus Taken Down from the Cross

7. Jesus Laid in the Tomb

In The Glories of Mary, St. Alphonsus presents these in great detail, quoting major saints with their understandings into Mary’s sorrows and insights to saints given by the Blessed Mother herself and by Jesus.

Promises of Our Lady

“So much does the Crucified Lord desire humanity to ponder, along with His own saving Redemption, the coredemption of his Mother, that He has attached to the prayerful meditation of the seven principal historical events of Our Lady’s sufferings promises of grace and mercy that are nothing short of extraordinary and miraculous,” reveals Marian expert Mark Miravalle.

Our Blessed Mother revealed these seven promises to St. Bridget of Sweden in the 14th century. Our Lady said she would bestow seven graces to the those souls honoring her daily by saying seven Hail Marys while meditating on her tears and sorrows:

1. “I will grant peace to their families.”

2. “They will be enlightened about the divine Mysteries.”

4. “I will give them as much as they ask for as long as it does not oppose the adorable will of my divine Son or the sanctification of their souls.”

5. “I will defend them in their spiritual battles with the infernal enemy and I will protect them at every instant of their lives.”

6. “I will visibly help them at the moment of their death—they will see the face of their mother.”

7. “I have obtained this grace from my divine Son, that those who propagate this devotion to my tears and dolors will be taken directly from this earthly life to eternal happiness, since all their sins will be forgiven and my Son will be their eternal consolation and joy.”

In The Glories of Mary, St. Alphonsus also lists the four promises Jesus made for those devoted to his Mother’s sorrows. Alphonsus recounts the revelation made to St. Elizabeth of Hungary “that after the assumption of the Blessed Virgin into heaven, St. John the Evangelist desired to see her again. The favor was granted him; his dear Mother appeared to him, and with her Jesus Christ also appeared; the St. then heard Mary ask her Son to grant some special grace to all those who are devoted to her dolors. Jesus promised her four principal ones

First, that those who before death invoke the Divine Mother in the name of her sorrows should obtain true repentance of all their sins.

Third, that He would impress upon their minds the remembrance of His Passion, and that they should have their reward for it in heaven.

Fourth, that He would commit such devout clients to the hands of Mary, with the power to dispose of them in whatever manner she might please, and to obtain for them all the graces she might desire.”

Saints on Her Sorrows

In his great work, St. Alphonsus also presents the insights of a number of major saints as they see the connection between Our Lady of Sorrows and her Crucified Son. A look at a tiny handful helps us visualize her sorrows and our need to take them to heart, and console and honor her.

Looking at Our Lady’s “sea of grief” at the Passion, St. Bernardine professed “that if all the sorrows of the world were united, they would not equal that of the glorious Virgin Mary.”

St. Bonaventure asks this Mother, “O Lady, where art thou? Near the cross? Nay, rather, thou art on the cross, crucified, sacrificing thyself with thy Son.”

Our Lady herself told St. Bridget, that even after Jesus’ death and Ascension into heaven,  whether she was working or eating, the memory of his Passion was deeply imprinted  and always in her tender heart.

An angel addressed these words to St. Bridget: “As the rose grows up amongst thorns, so the Mother of God advanced in years in the midst of sufferings; and as the thorns increase with the growth of the rose, so also did the thorns of her sorrows increase in Mary, the chosen rose of the Lord, as she advanced in age; and so much the more deeply did they pierce her heart.”

The angel also told her that this Mother was so merciful and kind she was, recounts St. Alphonsus, “willing to suffer any pain, rather than to see souls unredeemed or left in their former perdition.  It may be said that this was the only consolation of Mary in the midst of her great sorrow at the passion of her Son, to see the lost world redeemed by his death, and men, who were his enemies, reconciled with God.”

“But of this she complained to St. Bridget, that very few pitied her, and most lived forgetful of her Sorrows. ‘I look around upon all who are in the world, if perchance there may be any to pity me, and meditate upon my sorrows, and truly I find very few. Therefore, my daughter, though I am forgotten by many, at least do not thou forget me; behold my anguish, and imitate, as far as thou canst, my grief.’”

In her book ‘Calls’ From the Message of Fatima, Sister Lucia brings out this same connection that “Mary, made one with Christ, is the co-redemptrix of the human race.”

Lucia explains how at Calvary “she suffered and agonized with him, receiving into her Immaculate Heart the last sufferings of Christ, his last words, his last agony and the last drops of his Blood, in order to offer them to the Father.”

Lucia adds as her own interpretation of this vision of Our Lady of Sorrows, God wishes “to show us the value of suffering, sacrifice and immolation for the sake of love. In the world of today hardly anyone wants to hear these truths, such is the extent to which people are living in search of pleasure, of empty worldly happiness, and exaggerated comfort. But the more one flees from suffering, the more we find ourselves immersed in a sea of afflictions, disappointments and suffering.”

How to console our Blessed Mother? Again, Fatima answers.

During the July 13 apparition, Our Lady told the children, Make sacrifices for sinners, and say often, especially while making a sacrifice: O Jesus, this is for love of Thee, for the conversion of sinners, and in reparation for offences committed against the Immaculate Heart of Mary. There’s any small sacrifice.

Do the Five First Saturday devotions. On December 10, 1925 Our Lady and Jesus appeared in the convent in Pontevedra, Spain to Lucia who described the visit

Jesus said: Have compassion on the Heart of your Most Holy Mother, covered with thorns, with which ungrateful men pierce it at every moment, and there is no one to make an act of reparation to remove them.

Then the Blessed Virgin Mary said to Lucia: Look, my daughter, at My Heart, surrounded with thorns with which ungrateful men pierce Me at every moment by their blasphemies and ingratitude. You at least try to console Me and say that I promise to assist at the hour of death, with the graces necessary for salvation, all those who, on the first Saturday of five consecutive months, shall confess, receive Holy Communion, recite five decades of the Rosary, and keep me company for fifteen minutes while meditating on the fifteen mysteries of the Rosary, with the intention of making reparation to Me.

Again, comforting her sorrows also means putting into practice what she said in each apparition, including on Oct. 13: I want you to continue saying the Rosary every day.

Beginning this centennial anniversary, it’s time we comfort Our Lady of Sorrows.

Joseph Pronechen Joseph Pronechen is staff writer with the National Catholic Register since 2005 and before that a regular correspondent for the paper. His articles have appeared in a number of national publications including Columbia magazine, Soul, Faith and Family, Catholic Digest, Catholic Exchange, and Marian Helper. His religion features have also appeared in Fairfield County Catholic and in major newspapers. He is the author of Fruits of Fatima — Century of Signs and Wonders. He holds a graduate degree and formerly taught English and courses in film study that he developed at a Catholic high school in Connecticut. Joseph and his wife Mary reside on the East Coast.