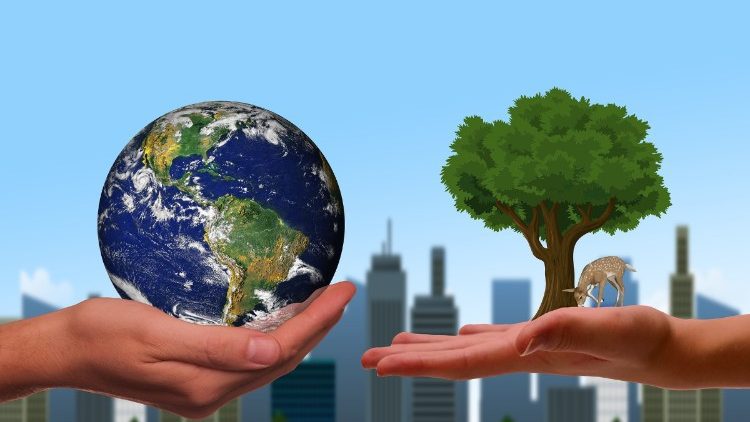 In a joint message for the 2021 Season of Creation, Pope Francis, Ecumenical Patriarch Bartholomew, and Archbishop Justin Welby of Canterbury stress the importance of cooperation and valuing sustainability over short-term advantages as essential parts of our common response to the threat of climate change and environmental degradation.

“For more than a year, we have all experienced the devastating effects of a global pandemic—all of us, whether poor or wealthy, weak or strong. Some were more protected or vulnerable than others, but the rapidly-spreading infection meant that we have depended on each other in our efforts to stay safe.”

These observations begin the “Joint Message for the Protection of Creation” issued on 1 September by Pope Francis, Ecumenical Patriarch Bartholomew I, and Justin Welby, Archbishop of Canterbury.

The religious leaders note that in facing this worldwide calamity, “no one is safe until everyone is safe,” because “our actions really do affect one another,” and “what we do today affects what happens tomorrow.”

The joint message comes in the midst of the 2021 Season of Creation running from 1 September through 4 October, which presents “an opportunity to pray and care for God’s creation.” It also comes as world leaders prepare to meet at the UN Climate Change Conference (COP26), scheduled to take place in November, in Glasgow, Scotland, to deliberate on the future of our planet.

Urging everyone to action so that we may “not waste this moment”, the religious leaders invite everyone to “decide what kind of world we want to leave to future generations,” stressing that we must choose to live differently and “choose life”. More so, God mandates that we “choose life, so that you and your children might live” (Dt 30:19).

The message, thus, invites all of us, regardless of belief or worldview, to “endeavor to listen to the cry of the earth and of people who are poor, examining their behaviour and pledging meaningful sacrifices for the sake of the earth which God has given us.”READ ALSO01/09/2021

A vital starting point for social, economic and environmental stability is stewardship – the “individual and collective responsibility for our God-given endowment,” the religious leaders underline.

In this regard, Christian tradition, the scriptures and the saints provide perspectives for understanding both the present and the “promise of something larger than what we see in the moment.”

For example, the biblical stories of the rich and foolish man who stored great wealth of grain while forgetting about his finite end (Lk 12: 13-21), and the prodigal son who squandered his inheritance and ended up hungry (Lk 15: 11-32), caution us against adopting short-term, seemingly inexpensive options, instead of adopting “a broader outlook and recognizing our place in the extended story of humanity.”

The joint message goes on to warn against maximizing our interests at the expense of future generations, noting that by concentrating on our wealth, long-term assets, including the bounty of nature, are often depleted for short-term advantage. Furthermore, through the new possibilities for progress and wealth accumulation afforded us by technology, we are behaving in ways “which demonstrate little concern for other people or the limits of the planet.”

“Nature is resilient, yet delicate,” the religious leaders stress. “Now, in this moment, we have an opportunity to repent, to turn around in resolve, to head in the opposite direction. We must pursue generosity and fairness in the ways that we live, work and use money, instead of selfish gain.”

The religious leaders point out that amid the climate crisis, we stand before “a harsh justice” marked by biodiversity loss, environmental degradation and climate change – all inevitable consequences of our actions – because we “have greedily consumed more of the earth’s resources than the planet can endure.”

However, we also face “a profound injustice,” as “the people bearing the most catastrophic consequences of these abuses are the poorest on the planet and have been the least responsible for causing them.”

This is evident in the extreme weather and natural disasters of recent months that reveal to us, at great human cost, that climate change is “not only a future challenge, but an immediate and urgent matter of survival.” In addition, floods, fires and droughts have forced whole communities to relocate; cyclones have devastated entire regions, and water and food insecurity have led to conflicts and displacement for millions of people.

“We serve a God of justice, who delights in creation and creates every person in God’s image, but also hears the cry of people who are poor. Accordingly, there is an innate call within us to respond with anguish when we see such devastating injustice,” the message reads.

The religious leaders further caution that “tomorrow could be worse” and today’s children and teenagers risk facing catastrophic consequences unless we take responsibility now to sustain our world as “fellow workers with God.” They, therefore, invite everyone, for the sake of our children, to “eat, travel, spend, invest and live differently, thinking not only of immediate interest and gains but also of future benefits.”

“We repent of our generation’s sins. We stand alongside our younger sisters and brothers throughout the world in committed prayer and dedicated action for a future which corresponds ever more to the promises of God,” they urge.

Over the course of the pandemic, which brought to the fore our vulnerabilities and the frailty of our systems, these crises present us with a choice, the message points out.

“We are in a unique position either to address them with shortsightedness and profiteering or seize this as an opportunity for conversion and transformation.”

If humanity as a family works together towards a future based on the common good, we could find ourselves living in a different world, the message says. “Together we can share a vision for life where everyone flourishes. Together we can choose to act with love, justice and mercy. Together we can walk towards a fairer and fulfilling society with those who are most vulnerable at the centre.”

However, this involves making changes that involve individual responsibility for our use of resources. It will also require “an ever-closer collaboration among all churches in their commitment to care for creation” and for communities and nations to “discover new ways of working together to break down the traditional barriers between peoples, to stop competing for resources and start collaborating.”

Furthermore, leaders, heads of companies and employers of labour must become leaders in the transition to just and sustainable economies, choosing “people-centered profits and make short-term sacrifices to safeguard all our futures.”

Appeal to all Christians

Finally, the religious leaders reiterate their appeal to every Christian, believer and people of goodwill to play a part in changing our collective response to the threat of climate change and environmental degradation.

They also prayed for the world leaders who will gather for the COP26 UN Climate Change conference in November, recalling that “choosing life means making sacrifices and exercising self-restraint.”

Pope Francis, Ecumenical Patriarch Bartholomew and Archbishop Justin Welby of Canterbury also note that this is the first time they have felt compelled to jointly address “the urgency of sustainability, its impact on persistent poverty, and the importance of global cooperation.”

“Caring for God’s creation is a spiritual commission requiring a response of commitment,” they said. “This is a critical moment. Our children’s future and the future of our common home depend on it.”