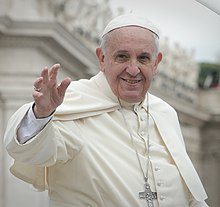 At the weekly General Audience, Pope Francis reflects on the fatherhood of St. Joseph, and prays that all children might enjoy the bond of paternal love, even if through the praiseworthy practice of adoption.

Pope Francis continued his catechesis series on St. Joseph at the Wednesday General Audience, focusing his remarks on his role as the father of Jesus.

The Pope noted that the Gospels of Luke and Matthew present Joseph as the “foster-father of Jesus” and not as his biological one.

The evangelist Matthew avoids the term “father of” in his genealogy, while Luke said he was the father of Jesus, “as was supposed”.

Pope Francis recalled that the practice of adoption was much more common in ancient times in the East than it is in our own societies.

He gave the example of the requirement in ancient Israel for a man to marry the widowed wife of his deceased brother, if he died without a male heir (Dt 25:5-6).

In this case, the legal father of the firstborn son from such a union would be the deceased man, ensuring both an heir for the deceased and the preservation of his estate.Listen to our report

The institution of fatherhood also included the right to name a son, as Joseph named Jesus, thereby legally recognizing Him.

“In ancient times, the name was the compendium of a person’s identity. Changing one’s name meant changing oneself.”

The Pope offered the examples of God changing Abram’s name to Abraham and Jacob’s to Israel, both of which involved a change to the patriarchs’ identity.

In choosing Jesus’ name, he added, Joseph already knew God had prepared a name for His Son, one meaning “the Lord saves.”

Pope Francis went on to reflect on fatherhood and motherhood, saying people become parents by taking up their responsibility for their children.

“Fathers are not born, but made. A man does not become a father simply by bringing a child into the world, but by taking up the responsibility to care for that child. Whenever a man accepts responsibility for the life of another, in some way he becomes a father to that person. (Apostolic Letter Patris Corde)”

Adoption a ‘risk’ worth taking

The Pope then turned his thoughts to the institution of adoption. He said Joseph shows that adoption is not based on a secondary type of bond with a child, but rather exemplifies a high form of love.

“How many children in the world are waiting for someone to take care of them!” said the Pope. “And how many spouses wish to be fathers and mothers but are unable to do so for biological reasons; or, although they already have children, they want to share their family’s affection with those who have been left without.”

Pope Francis encouraged willing families to choose the path of adoption, and to “take the risk of welcoming children.”

Speaking off-the-cuff, the Pope lamented the “demographic winter” facing parts of the world, and urged married couples to welcome children—through natural birth or adoption—rather than buying more dogs and cats in place of children.

“Having a child is always a risk, whether naturally or by adoption. But it is more risky not to have them, to negate fatherhood or motherhood, be it real or spiritual.”

And he urged civil institutions to promote legal adoption, “by seriously monitoring but also simplifying the necessary procedure to fulfill the dream of so many children who need a family”.

Finally, the Pope prayed that no child may be “deprived of a bond of paternal love.”

“May Saint Joseph exercise his protection over and give his help to orphans,” he prayed, “and may he intercede for couples who wish to have a child.”

Pope Francis concluded his catechesis with a prayer to St. Joseph:

Saint Joseph,
you who loved Jesus with fatherly love,
be close to the many children who have no family
and who wish for a father and a mother.
Support the couples who are unable to have children,
Help them to discover, through this suffering, a greater plan.
Make sure that no one lacks a home, a bond,
a person to take care of him or her;
and heal the selfishness of those who close themselves off from life,
that they may open their hearts to love. Amen.