Pope at Audience: Mary near to those who die alone in pandemic 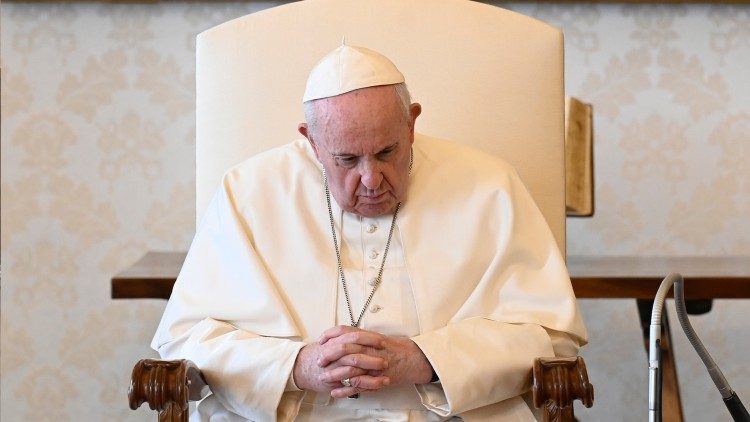 At the weekly General Audience, Pope Francis reflects on the theme of prayer in communion with Mary, and says Our Lady is at the bedside of those who die alone without the comfort of their loved ones.

As the Church prepares to celebrate the Feast of the Annunciation on Thursday, Pope Francis reflected on the beauty of the maternal intercession of the Blessed Virgin Mary.

Speaking at the Wednesday General Audience, the Pope continued his catechesis on prayer, focusing on “prayer in communion with Mary.”

He began by noting the centrality of Jesus in all forms of Christian prayer.

“Each prayer we raise to God is through Christ, with Christ and in Christ and is fulfilled thanks to His intercession,” said the Pope, adding that Christ “is the only Redeemer: there are no co-redeemers with Christ.”

Blessed is the fruit

Pope Francis went on to say that Christ’s mediation for us with the Father gives meaning to other references which Christians turn to in prayer, “first among them being the Virgin Mary, the Mother of God.”

“She occupies a privileged place in the lives of Christians,” he said, “and therefore, in their prayer as well, because she is the Mother of Jesus.”

The Holy Father recalled how the Eastern Churches describe her with the Greek term Hodegetria: “the one who shows the way” to her Son. He added that everything about Mary is “completely directed” toward Christ and is the “first disciple”.

Pray for us sinners

Jesus, said the Pope, extended Mary’s maternity to all members of the Church when He entrusted her to His beloved disciple who stood at the foot of the Cross.

“From that moment on, we have all been gathered under her mantle,” he said.

Just as she stayed near her dying Son in his last moments, said Pope Francis, so she remains with those who are dying, as we pray in the Hail Mary.

“Mary is always present at the bedside of her children when they depart this world,” he said. “If someone is alone and abandoned, she is there, near, as she was next to her Son when everyone else abandoned him.”

Now and at the hour of our death

During the Covid-19 pandemic, as so many people die alone in hospital due to social restrictions, Mary accompanies those who are on their deathbed in solitude.

She is with those who die without the comfort of their loved ones, said the Pope, “with her maternal tenderness.”

“Prayers said to her are not in vain,” he added. “She hears our voices, even those that remain closed in our hearts”.

Heart of a mother

Mary, concluded Pope Francis, always protects her children, defending us from danger, even when we lose our way or put our salvation in danger.

“Mary is there,” he said, “praying for us, praying for those who do not pray. Because she is our Mother.”