Pope at Easter Urbi et Orbi: May we be won over by the peace of Christ! 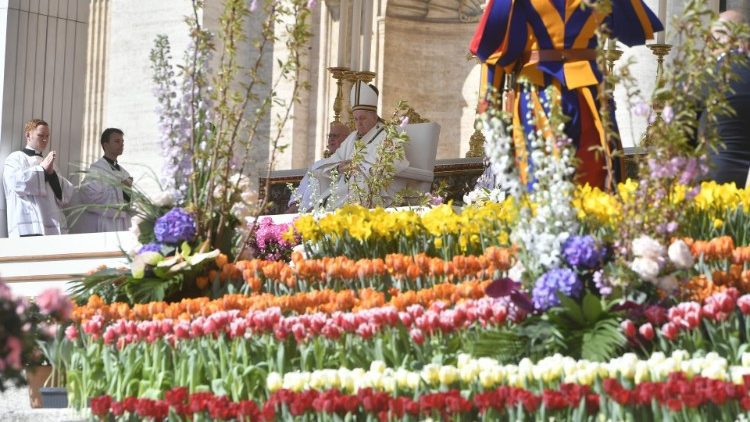 In his Easter “To the Church and to the World” message, Pope Francis announces that Jesus, the Crucified One, is risen, and he remembers victims of war, all those suffering around the world, and appeals ardently that the peace of Christ may enter our lives, our homes, and our countries.

Pope Francis presided over the Easter celebrations in sun and flower-filled St. Peter’s Square, crowded with pilgrims in a way not seen since before the pandemic.

A brilliant display of forty thousand flowers and plants turned St. Peter’s Square into a garden, thanks to the annual gift by florists from the Netherlands.

Following the Easter Vigil liturgy in St. Peter’s Basilica on Saturday, the Pope presided over the Mass of Easter Day with an estimated 100,000 pilgrims in the Square on a breezy, cool Spring morning.

As in previous years, the Pope did not deliver a homily, but spoke at 12 pm when he gave his traditional Easter message followed by his blessing “Urbi et Orbi” (to the city and the world) from the central loggia of St. Peter’s Basilica.

Wishing all those present and participating around the world via web, television and radio a Happy Easter, the Pope announced the joyous Easter message that, “Jesus, the Crucified One, is risen!” Jesus – alive and not a ghost – stood among His disciples who witnessed with incredulous eyes His greeting, “Peace be with you!”READ ALSO17/04/2022

Peace be with you!

May our hearts truly be opened as we welcome the Easter message, “Peace be with you!,” the Pope underscored, especially in these times where we are witnessing the opposite, an Easter marked by war where so many have died and violence continues.

As we remember all our brothers and sisters who have had to seek shelter from the bombs, this tragic reality can make it difficult to really believe Jesus is truly risen, that life overcomes the death.

We need the Lord more than ever to stand before us and repeat to us, “Peace be with you!” the Pope emphasized.

While there were hopes that a new spirit of solidarity was taking root following the pandemic, he said, instead, we see again how the “spirit of Cain,” who saw his brother Abel as a rival to be eliminated, still works within us as witnessed in the dreadful wars and violence of today.

Only the Lord can bring us true peace, the Pope pointed out, Jesus who bore our wounds that we inflicted on Him by our sins, hardness of heart and fratricidal hatred.

He also bore them for our sake, and manifested them to his disciples when he appeared to them, as “indelible seal of his love for us, a perennial act of intercession, so that the heavenly Father, in seeing them, will have mercy upon us and upon the whole world.”

“As we contemplate those glorious wounds, our incredulous eyes open wide; our hardened hearts break open and we welcome the Easter message: “Peace be with you!” Let us allow the peace of Christ to enter our lives, our homes, our countries!”

“May there be peace for war-torn Ukraine,” the Pope prayed, and that “in this terrible night of suffering and death, may a new dawn of hope soon appear!”

The Pope said he holds in his heart the victims, the millions of refugees, the orphaned children, and the elderly left to themselves. We hear especially the cry of the children, he said, together with suffering children around the world who are victims of violence, the right to be born, hunger or lack of medical care.

He appealed for leaders to hear the cry of their suffering and to make decisions in favour of peace.

“May the leaders of nations hear people’s plea for peace. May they listen to that troubling question posed by scientists almost seventy years ago: “Shall we put an end to the human race, or shall mankind renounce war?” (Russell-Einstein Manifesto, 9 July 1955).”

The Pope paid tribute to all those who have opened their doors to welcome migrants and refugees through Europe, calling these acts of charity signs of hope and a blessing for society that can help overcome selfishness and individualism.

May we also respond with the same compassion and solidarity to conflicts around the word, the Pope appealed, ones sometimes overlooked or forgotten.

Peace in the Middle East

“Peace upon Jerusalem and peace upon all those who lover her, Christians, Jews and Muslims alike,” the Pope prayed, asking that all who dwell in the Holy City may experience the beauty of peace, fraternity, respect and access to all the Holy Places.

May peace and reconciliation take root among all people and communities in Lebanon, Syria, Iraq, Libya and Yemen, the Pope mentioned, where despite ongoing conflicts people ardently hope for an end to the violence, tensions and profound suffering as a result.

Peace in our world

The Pope prayed for the gift of reconciliation in Myanmar, and help for Aghanistan where a humanitarian crisis is causing great suffering.

He remembered the African continent, where terrorist attacks in the Sahel region have caused an exodus of peoples, and Ethiopia and the Democratic Republic of Congo, so that the path of dialogue and reconciliation wins out. The resulting conflicts have caused grave humanitarian crises, and may we be there to help the people, he stressed.

The Pope prayed for the victims of natural disasters in recent weeks, especially flood victims in South Africa.

He remembered those struggling in Latin America as social conditions worsen due to the pandemic, crime and drug trafficking.

He also prayed that the risen Lord accompany the journey of reconciliation the Catholic Church in Canada is undertaking with the indigenous people.

Won over by the peace of Christ

In conclusion, Pope Francis encouraged everyone to know that despite the grief and suffering caused by war and calamities, that “Jesus Christ, the victor over sin, fear and death, exhorts us not to surrender to evil and violence.”

“May we be won over by the peace of Christ! Peace is possible; peace is a duty; peace is everyone’s primary responsibility!”