Pope at Mass: ‘Divine Mercy opens us to suffering of others’ 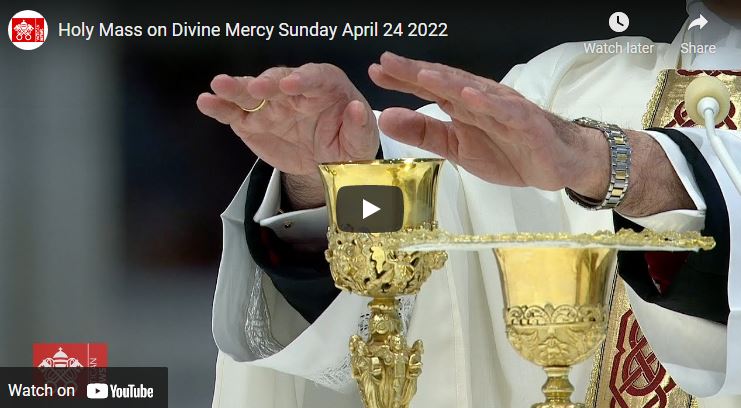 Pope Francis delivers the homily at Mass on Divine Mercy Sunday in St. Peter’s Basilica, and reflects on Jesus’ post-Resurrection exhortation to His disciples: “Peace be with you.”

For the first time since the outbreak of the pandemic, Mass was celebrated in St. Peter’s Basilica on Divine Mercy Sunday, after the feast was celebrated for the last two years in the nearby Church of the Holy Spirit in the Saxon District.

Archbishop Rino Fisichella, the President of the Pontifical Council for Promoting the New Evangelization, presided over the Mass, which saw Pope Francis participate and deliver the homily.

The Pope focused on the three times Jesus spoke the words “Peace be with you” to the disciples after His death and resurrection.

He said that Christians find that those words of God’s mercy “give joy, then grant forgiveness, and finally offer comfort in every difficulty.”

Filling us with joy

The first time Jesus spoke those words on the evening of Easter (Jn 20), said the Pope, the disciples were filled with joy.

As they huddled in fear three days after Jesus’ death, the disciples were “burdened by a sense of failure” after having abandoned their Master and even denied Him in His tragic hour.

In this condition, said Pope Francis, they should have felt shame at seeing Jesus’ face.

Yet, His greeting of peace made them turn their attention “away from themselves and towards Jesus.”

“Christ did not reproach them for what they had done, but showed them his usual kindness. And this revives them, fills their hearts with the peace they had lost, and makes them new persons, purified by a forgiveness that is utterly unmerited.”

The joy brought by Jesus, added the Pope, cuts through our own failings and helps us embrace God’s mercy and the joy of being forgiven.

Jesus offers us “a joy that raises us up without humiliating us.”

Pope Francis then reflected on the second time Jesus said “Peace be with you,” after which He adds “As the Father has sent me, so I send you.”

After having received God’s forgiveness, said the Pope, the disciples are made “agents of reconciliation” in order to dispense “the mercy that they themselves have received.”

“Today and every day, in the Church forgiveness must be received in this same way, through the humble goodness of a merciful confessor who sees himself not as the holder of some power but as a channel of mercy, who pours out upon others the forgiveness that he himself first received.”

Jesus, said the Pope, has made the entire Church a “community that dispenses mercy, a sign and instrument of reconciliation for all humanity.”

He added that each of us must spread God’s mercy to those around us in every situation of life.