Pope at Mass in Canada: ‘Jesus leads us from failure to hope and healing’ 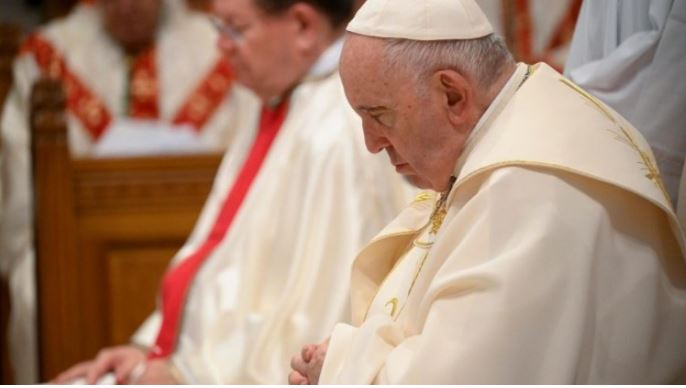 Pope Francis celebrates Mass at the Shine of Sainte-Anne-de-Beaupré in eastern Canada, near Quebec, and recalls that Jesus always walks with us to help us move beyond our failures toward hope in God.

At the start of the fifth day of his Apostolic Journey to Canada, Pope Francis presided over Mass in the National Shrine of Sainte-Anne-de-Beaupré, some 30 kilometers east of Quebec.

The Pope traveled by car to the oldest pilgrimage site in North America, which was first built in 1658 to house a miraculous statue of Jesus’ grandmother.

In his homily, Pope Francis reflected on the conclusion of Luke’s Gospel, which recounts the journey of the disciples to Emmaus and their encounter with Jesus, whom they did not initially recognize.

Failure along the way

The Pope said the disciples’ experience began with their distress and sadness at the apparent failure of Jesus’ plan but ended with the birth of a new hope, after Jesus accompanied them as a fellow traveler.

“Whenever our failures lead to an encounter with the Lord, life and hope are reborn and we are able to be reconciled: with ourselves, with our brothers and sisters, and with God.”

Like the disciples, we too can experience failure in our own spiritual journey when our plans fall through, when we give up on our high ideals due to our own inadequacies, or when we feel crushed by our sins.

Pope Francis said the Church community experiences similar setbacks when faced with “the scandal of evil and the violence that led to Calvary.”

Catholics at Mass in the Shrine of Saint Anne de Beaupré.

Stuck in grief and remorse

The temptation in such moments of doubt and failure is to flee and seek refuge in grief and remorse.

“[Fleeing] is a temptation that comes from the enemy, who threatens our spiritual journey and that of the Church, for he wants us to think that all our failures are now irreversible.”

However, said Pope Francis, the Gospel teaches us that Jesus comes to walk by our side at precisely those moments of failure and teaches us to read events in a new light.

He noted that the Basilica of Sainte-Anne-de-Beaupré has been rebuilt three times, once after a devastating fire. Yet, the faithful of the area kept dreaming and set out again “with courage and creativity”.

Reconciliation and healing in Christ

Jesus, said Pope Francis, opens our eyes to the reality behind our perceived failures by breaking the bread and setting us back on the right path.

“What are we to do, as we endure spiritual and material trials, as we seek the path to a more just and fraternal society, as we strive to recover from our disappointments and weariness, as we hope to be healed of past wounds and to be reconciled with God and with one another?”

The answer lies in Jesus Himself, said the Pope, since He always comes to us to “show us the way to healing and reconciliation.”