Pope calls priests to draw near to God, bishop, priests, and people 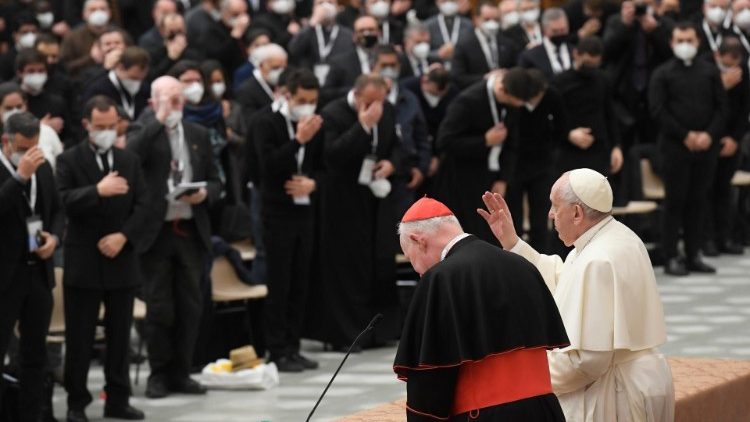 Pope Francis addresses the International Theological Symposium on the Priesthood, inviting priests to be close to God, their Bishop, their fellow priests, and the people they are called to serve.

Pope Francis drew on over fifty years of his own priesthood in an address aimed at helping today’s priests “experience the peace and fruitfulness that the Spirit desires to bestow.” His reflections came in an address to the International Theological Symposium, promoted by the Congregation of Bishops, which opened on Thursday morning.
READ ALSO09/02/2022

The Holy Father addressed his remarks not only to those priests “who, by their life and witness, showed me from my earliest years what it means to reflect the face of the Good Shepherd,” but also “to those brother priests” that he has had to accompany “because they had lost the flame of their first love,” priests whose “ministry had become barren, repetitive, and meaningless.”

In a time of “epochal change,” he said, priests must learn to respond to the challenge not by retreating into the past, seeking “a sort of protection from risks”; nor by an “exaggerated optimism” that ignores the difficulties of change.” Instead, he said, “I prefer the response born of a trusting acceptance of reality, anchored in the wise and living Tradition of the Church, which enables us to ‘put out into the deep’ without fear.”

All vocations, including the vocation to the priesthood, require trusting discernment to determine where God is leading us, the Pope said. Faced with the many questions and temptations of our age, Pope Francis said he wanted to focus on what is “decisive” for the life of a priest today, “the attitudes that sustain us as priests.” He focused on “four pillars of our priestly life,” which he described as “four forms of closeness”: closeness to God, to the bishop, to fellow priests, and to the People of God.

Pope Francis insisted that priests are called “above all” to closeness with God, which helps them “draw all the strength needed for his ministry.” By drawing close to Jesus, priests experience with him both joys and sorrows, precisely because they rely on His strength, and not their own. This closeness must be nourished by prayer, and by silent contemplation of God. At the same time, it leads priests to draw close to their people; which in turn brings the priest closer to God.

Closeness to the bishop

Drawing near to one’s bishop, Pope Francis said, means learning how to listen, recognizing God’s will in obedience to another, and in relationship with others. The bishop, he said, is a bond establishes and preserves the Church in unity. The Pope invited priests to pray for their bishops, assuring them, “if we can preserve this bond, we will advance securely along on our way.”

Participants at the Symposium

Closeness to other priests

Pope Francis goes on to say, “It is precisely on the basis of communion with that a third bond of closeness emerges, the closeness of fraternity.” This priestly “fraternity” involves “deliberately choosing to pursue holiness together with others, and not by oneself.” Similarly, it means being open and honest with others, but also humble. At the same time, the Pope acknowledged the difficulties of living out fraternity with others, and called for “heralds” of a fraternity founded on mutual love.

In this context, the Pope also addressed the value of priestly celibacy, “a gift that the Latin Church preserves,” but which must be rooted in healthy relationships.

Closeness to the people

The Pope then reflected on the relationship of priests with the holy People of God, which he described not as a duty, but a grace. “For this reason,” he said, “the proper place of every priest is in the midst of the people, in close relationship to others.”

However, he insisted, this means being involved in their “real lives,” rather than sheltering themselves from people’s difficulties and misery. Pope Francis called on priests to imitate the ‘style’ of Jesus the Good Shepherd: the style of “closeness, compassion, and tenderness.”

He encouraged them, too, to foster a sense of belonging, in an age when so many people feel alone despite being connected to everyone. The Pope returns again to the relationship between closeness to the people and closeness to God, “since the prayer of a shepherd is nourished and becomes incarnate in the heart of the People of God.”

Participants at the Symposium

Not a burden, but a gift

Pope Francis concluded his address by calling on bishops and priests to ask themselves, “How am I practicing these forms of closeness?” He insisted that “a priestly heart knows about closeness, because his primary form of closeness is with the Lord.”

He closed with the reflection that “the forms of closeness that the Lord demands are not an added burden: they are a gift that He gives us to keep our vocation alive and fruitful […] signposts that point the way to appreciating and rekindling their missionary zeal.” Priestly closeness, he said, is “a closeness in the ‘style’ of God Himself, Who is ever close to us, with compassion and tender love.”

Listen to the Pope’s address (dubbed in English):