Pope: ‘Dialogue especially with those who disagree with you’ 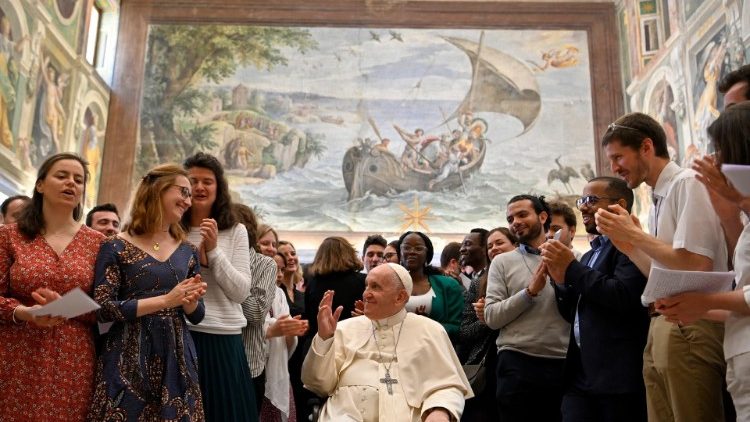 Pope Francis receives in audience a group of members of the “Political Fraternity” of the Chemin Neuf Community and invites them to pursue their commitment to foster encounter and take action for the good of humanity.

The Chemin-Neuf Political Fraternity brings together young people aged 18 to 35, from different countries and political cultures, motivated by the same passion for the common good and the poor, and eager to act in politics according to the heart of God.

Addressing a group of its members in the Vatican on Monday, Pope Francis offered a reflection on the genuine meaning of politics for Christians.

First and foremost, he said, politics is an art of encounter.

Noting that this encounter consists of being open to others and accepting their differences as part of a respectful dialogue, for Christians, he said: there is more.

The Gospel, the Pope explained, demands that we love our enemies and this means that we are “called to see political encounters as fraternal encounters, especially with people who disagree with us.”

It’s an attitude, he continued, that requires us to change the way we look at others, showing acceptance and respect.

“Without such a change of heart, politics often risks turning into a violent confrontation, where people try to impose their own ideas and pursue particular interests over the common good, contrary to the principle that “unity prevails over conflict” (cf. Evangelii Gaudium, 226-230).

Shared reflection, Pope Francis said, is equally important from a Christian standpoint, as we must recognize that politics must pursue the common good,  “not simply through the clash of differing and often opposed interests.”

“In a word, “the whole is greater than the part””

“Our own compass,” he said, “for advancing this common project is the Gospel, which brings to the world a profoundly positive vision of humanity as loved by God.”

Reflecting on the final point, “Action”, the Pope said he is happy to see that the Political Fraternity “is not satisfied to be merely a forum for discussion and exchange,” but is also directed toward concrete forms of commitment.

“As Christians, we must always be realistic, confronting our ideas with hard reality, lest we build on sands that sooner or later end up shifting.”

“Let us not forget that “realities are more important than ideas””

The Pope recalled the work the community does on behalf of migrants and ecology and mentioned his appreciation for the fact that some of its members have chosen to live together in a working-class quarter of Paris, “in order to listen to the voices of the poor: that is a Christian way of engaging in political life!”

Encounter, reflection, action: this is a political programme in the Christian sense.

And reiterating his appeal that unity must always prevail over conflict, the Pope invited those present to proceed in their path “imitating Jesus Christ” and “listening attentively to the Holy Spirit” so that politics can be practiced as “the highest form of charity”, as defined by Pope Pius XI.