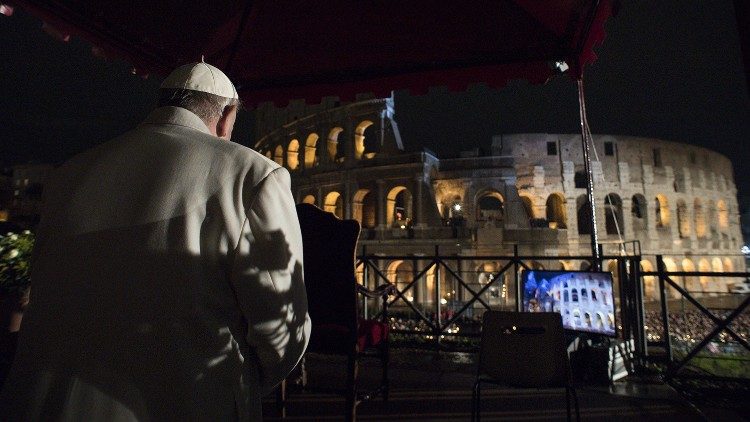 Pope Francis entrusts the preparation for the meditations and prayers for this year’s Via Crucis at the Colosseum on Good Friday to families linked to Catholic communities and associations carrying out volunteer service and assistance.

Pope Francis has entrusted meditations and prayers of this year’s Good Friday Way of the Cross to families, the director of the Vatican Press Office, Matteo Bruni said in a statement on Thursday.

“On the occasion of the year dedicated to the family with which the Church celebrates the fifth anniversary of the apostolic exhortation Amoris laetitia, Pope Francis has entrusted the preparation of the texts of the meditations and prayers for the Stations of the Cross on Good Friday at the Colosseum to a number of families linked to Catholic communities and associations for voluntary work and assistance,” he wrote. “According to the chosen themes,” he said, “some families will carry the cross between the stations.”

Amoris laetitia is the post-synodal apostolic exhortation by Pope Francis addressing the pastoral care of families. Dated March 19, 2016, it follows the Synods of Bishops on the Family held in the Vatican in 2014 and 2015.

On March 19, 2021, the Church marked the 5th of the publication of Amoris laetitia, on the beauty and joy of love in the family.  On that day, Pope Francis launched the Amoris Laetitia Family Year which will conclude this year on June 26, with the 10th Meeting of Families in Rome.

The Way of the Cross returns to the Colosseum

On Good Friday evening, the Pope will preside over the liturgy of the Lord’s Passion in St. Peter’s Basilica. Later, at 9.15 pm, he will lead the Way of the Cross at the Colosseum.

For the past two years, the Pope’s Good Friday Way of the Cross was held in St. Peter’s Square because of the Covid-19 emergency. This year, with the infection slowing down, the candle-lit event is returning to its usual site.

The Vatican Congregation for Divine Worship and the Discipline of the Sacraments issued guidelines to bishops around the world for 2020 and 2021 recommending prudence such as avoiding crowds and contact during the celebration of Holy Week services, as many countries and areas were under strict lockdowns to contain the coronavirus pandemic.

Every year, the Pope assigns the meditations of the pious practice to a group, association or individuals to seek inspiration on the Lord’s passion from different perspectives.

Last year, the Good Friday meditations and prayers were assigned to children belonging to a scout group and to a parish in Rome. The children recounted the “great little sufferings” that accompany their daily life, from the fear of the dark to that of abandonment, the experience of their limits, bullying at school, quarrels with parents, to fear of the pandemic.

In 2020, the task was assigned to the inmates of a prison in Padua, Italy.  They spoke about the pain of a family of a murdered one or the daughter of a man with a life sentence; the suffering of the mother of an inmate and the hope of a priest accused and then definitively acquitted after 8 years; the responsibility of a prison educator, a catechist, a volunteer friar and a prison police officer.