Pope Francis at Rosary for peace: Prayer can save the world 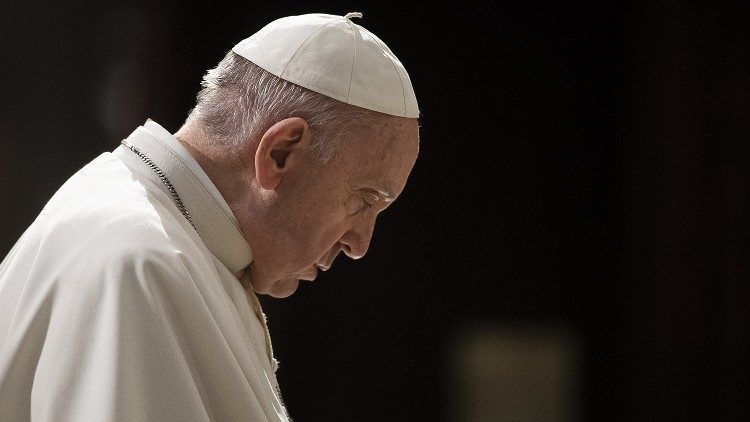 Pope Francis and Christians across the world join in praying the Rosary for peace at the Basilica of St. Mary Major, in Rome.

Pope Francis on Tuesday invoked the intercession of the Virgin Mary, Queen of Peace, to grant humanity the gift of peace.

Speaking on Sunday, the Pope invited the faithful across the globe to join him in praying the Rosary on the last day of the Marian month of May, as wars continue to afflict humanity with death, suffering and destruction.

The prayer vigil, which took place in the Papal Basilica of St. Mary Major, included the participation of people affected or displaced by war, of migrants and refugees.READ ALSO29/05/2022

Representing all those who suffer

There was a Ukrainian family, representing all the families experiencing the violence and abuse of war; military chaplains, for those who bring hope and comfort to afflicted populations; a male and a female volunteer, for all those who continue to carry out their service on behalf of others even in situations of great danger and precariousness; a Syrian family and a Venezuelan family, representing the many people who continue to suffer unjustly as a result of conflict; some refugees, giving a face and a voice to the millions who have been forced to leave their homes and have found welcomed in other countries as they try are to rebuild their lives.

“O Mary, Mother of God and Queen of Peace, during the pandemic we gathered around You to ask for Your intercession,” the Pope prayed.

He recalled that prayer in which Christians asked for support for the sick and for strength for medical staff, implored mercy for the dying and consolation for those who suffered in silence and loneliness.

“This evening, at the end of the month especially consecrated to You, here we are again before You, Queen of Peace, to beseech You: grant the great gift of peace, bring a quick end to war which has been raging for decades now in various parts of the world, and which has now invaded the European continent as well.”

Noting that we are aware that peace cannot be the result of negotiations alone nor a consequence of political agreements alone, but is above all an Easter gift of the Holy Spirit, the Pope recalled the consecration of the warring nations to the Immaculate Heart of Mary, asking for the great gift of the conversion of hearts.

“We are confident that with the weapons of prayer, fasting, almsgiving, and the gift of your grace, the hearts of men and the fortunes of the whole world can be changed.”

Shrines around the world joined the Pope by video link

Pope Francis invoked the Mother of God to intercede for us with Her Son, to “reconcile hearts filled with violence and vengeance, straighten thoughts blinded by the desire for easy enrichment.”

“On all the earth may Your peace reign everlasting.”

Entrusting humanity “sorely tried by wars and armed conflicts” to the Queen of Peace, the Pope reflected on the liturgical reading of the day which tells of how Mary visited Elizabeth revealing herself as  a missionary woman bringing and sharing the joy of proclamation: a woman of charity in placing herself at the service of the most fragile.

“On this same day, we join in prayer with shrines and families around the world in praying the Holy Rosary for peace.”

Amongst the prayer intentions that were recited, special mention was made of the suffering of various groups of people particularly touched by grief in recent years.

“That no one may suffer unjustly.”

For those who bring comfort and faith to war-stricken peoples

“Let us pray for priests, consecrated persons and all those who bring the word of hope and the comfort of faith to war-stricken peoples.”

“That they may always be instruments of mercy.”