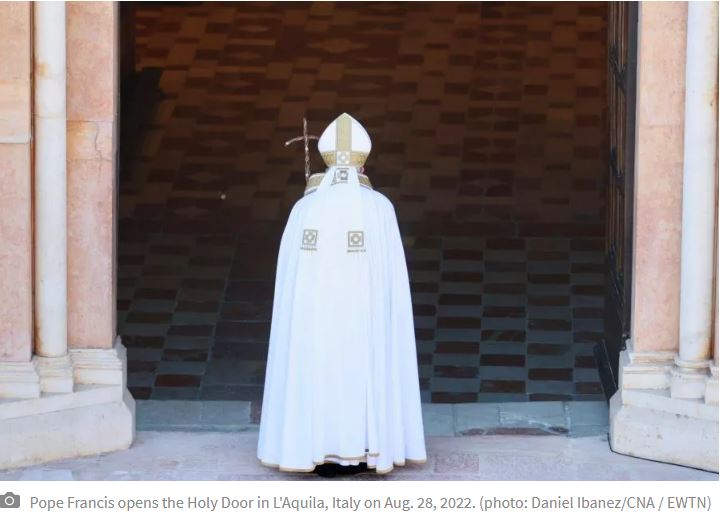 The opening of the Holy Door marked a key moment in the annual celebration established by Pope Celestine V in 1294.

VATICAN CITY — Pope Francis became the first pope in 728 years to open the Holy Door of a 13th-century basilica in the Italian city of L’Aquila on Sunday.

During a visit to the Italian city located about 90 miles north of Rome on Aug. 28, the Pope participated in a centuries-old tradition, the Celestinian Forgiveness, known in Italian as the Perdonanza Celestiniana.

The opening of the Holy Door marked a key moment in the annual celebration established by Pope Celestine V in 1294.

“For centuries L’Aquila has kept alive the gift that Pope Celestine V left it. It is the privilege of reminding everyone that with mercy, and only with it, the life of every man and woman can be lived with joy,” Pope Francis said in his homily during Mass in L’Aquila’s Basilica of Santa Maria di Collemaggio.

“To be forgiven is to experience here and now what comes closest to the resurrection. Forgiveness is passing from death to life, from the experience of anguish and guilt to that of freedom and joy. May this church always be a place where we can be reconciled, and experience that grace that puts us back on our feet and gives us another chance,” he said.

Pope Francis began the day trip at 7:50 a.m. traveling by helicopter from the Vatican to L’Aquila. He visited the city’s cathedral, which is still being rebuilt after it was badly damaged during a 2019 earthquake in which more than 300 people died.

The Pope wore a hard hat while touring the reconstruction area of the damaged church. He spoke to family members of earthquake victims in the town square in front of the cathedral, where local prisoners were also present in the crowd. People cheered and waved Vatican flags as Pope Francis greeted them from a wheelchair.

Pope Francis said: “First of all I thank you for your witness of faith: despite the pain and loss, which belong to our faith as pilgrims, you have fixed your gaze on Christ, crucified and risen, who with his love redeemed the nonsense of pain and death.”

“And Jesus has placed you back in the arms of the Father, who does not let a tear fall in vain, not even one, but gathers them all in his merciful heart,” he added.

After speaking to the families of the victims, Pope Francis traveled in the popemobile to L’Aquila’s Basilica of Santa Maria di Collemaggio, where he celebrated an outdoor Mass, recited the Angelus, and opened the Holy Door.

In his brief Angelus message, the Pope offered a prayer for the people of Pakistan, where flash floods have killed more than 1,000 people and displaced thousands more.

Pope Francis also asked for the intercession of the Virgin Mary to obtain “forgiveness and peace for the whole world,” mentioning Ukraine and all other places suffering from war.

During his visit to L’Aquila, the Pope said that he wanted the central Italian city to become a “capital of forgiveness, peace, and reconciliation.”

“This is how peace is built through forgiveness received and given,” he said.

L’Aquila is the burial place of Pope Celestine V, who led the Catholic Church for just five months before his resignation on Dec. 13, 1294. The pope, who was canonized in 1313, is buried in L’Aquila’s Basilica of Santa Maria di Collemaggio.

In the spring, the Vatican’s announcement that Pope Francis would visit L’Aquila prompted unsourced speculation that the trip could be the prelude to the 85-year-old pope’s resignation.

When Benedict XVI became the first pope to resign in almost 600 years in 2013, Vatican-watchers recalled that he had visited the tomb of Celestine V years earlier. During his trip on April 28, 2009, he left his pallium — the white wool vestment given to metropolitan archbishops — on the tomb. In hindsight, commentators suggested that Benedict was indicating his intention to resign.

In his homily in L’Aquila, Pope Francis praised Pope Celestine V for his humility and courage.

Mentioning Dante Alighieri’s description of Celestine as the man of “the great refusal,” Pope Francis underlined that Celestine should not be remembered as a man of “no” — for resigning the papacy —  but as a man of “yes.”

At the end of the Mass, the crowd prayed the Litany of Saints and watched as Pope Francis made history when he opened the basilica’s Holy Door. According to Cardinal Giuseppe Petrocchi of L’Aquila, Pope Francis is the first pope to open the Holy Door in 728 years.

Visiting cardinals have opened the Holy Door for the Celestinian Forgiveness in past years, after a reading of the bull of forgiveness by the local mayor. Celestine donated the papal bull to L’Aquila, where it is kept in an armored chapel in the tower of the town hall.

The bull of forgiveness drawn up by Celestine V offered a plenary indulgence to all who, having confessed and repented of their sins, go to the Basilica of Santa Maria di Collemaggio from Vespers on Aug. 28 to sunset on Aug. 29. A plenary indulgence is a grace granted by the Catholic Church through the merits of Jesus Christ, Mary, and all the saints to remove the temporal punishment due to sin.

Celestine’s indulgence was exceptional at the time, given it was available to anyone, regardless of status or wealth, and cost nothing except personal repentance at a time when indulgences were often tied to almsgiving.

After opening the Holy Door, Pope Francis was wheeled through the basilica to the tomb of Pope Celestine V, where he spent a moment in silent prayer before the relics of his papal predecessor who was declared a saint in 1313.

“In the spirit of the world, which is dominated by pride, today’s Word of God invites us to be humble and meek. Humility does not consist in the devaluation of self, but rather in that healthy realism that makes us recognize our potential and also our miseries,” Pope Francis said.

“Starting precisely from our miseries, humility causes us to look away from ourselves and turn our gaze to God, the One who can do everything and also obtains for us what we cannot have on our own. ‘Everything is possible for those who believe (Mark 9:23).’”