Pope Francis: Blood of 21 Martyrs Slain by ISIS in 2015 Is ‘a Seed That Will Bear Rich Fruit’ 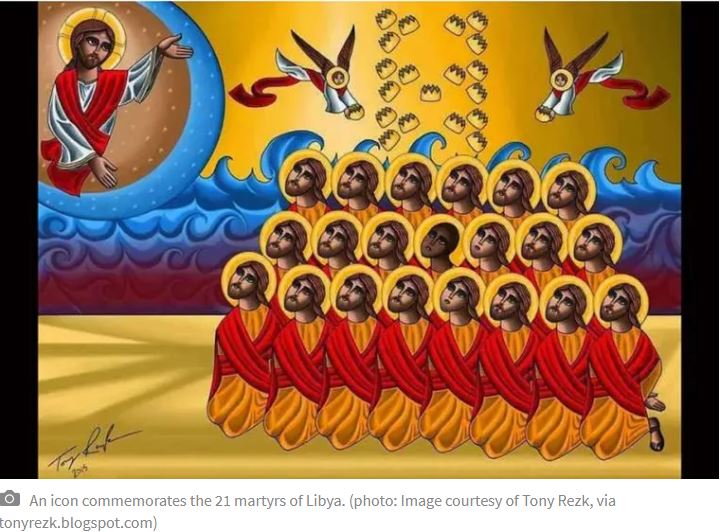 In a May 10 letter to Coptic Orthodox Patriarch Tawadros II, the Pope said that the men’s deaths had touched the lives of Christians around the world.

Pope Francis has said that the blood of 21 martyrs killed by ISIS on a Libyan beach in 2015 is “a seed that will bear rich fruit for Christian unity.”

In a May 10 letter to Coptic Orthodox Patriarch Tawadros II, the Pope said that the men’s deaths had touched the lives of Christians around the world.

Referring to those who have suffered in Christ’s name, he wrote: “Among this ‘cloud of witnesses’ (Hebrews 12:1), I call to mind particularly the 21 Coptic martyrs killed on Feb. 15, 2015, whose blood is not only the ‘seed of Christians,’ but also, I am deeply convinced, a seed that will bear rich fruit for Christian unity.”

“Thanks to their powerful witness, many Christians in our world have come to realize that the ranks of the martyrs include not only saints of the early Church depicted in ancient icons, but also men and women of our day, our contemporaries. They too are saints, saints of every Christian tradition.”

The beheading of the 21 men, dressed in orange jumpsuits, was shown in a propaganda video released by ISIS on Feb. 15, 2015. The jihadist group had kidnapped the construction workers in the Libyan city of Sirte. Twenty of those killed were from Egypt and one, Matthew Ayariga, was from Ghana.

The 21 men were canonized by Tawadros II. Their remains were identified and returned to Egypt, where they were placed in a church built in their honor.

The Pope sent the letter on the eighth “Day of Friendship” between Copts and Catholics. The day celebrates the ecumenical ties between the roughly 10 million-strong Coptic Orthodox Church and the Catholic Church.

The day is marked annually on May 10, in memory of the historic first meeting between a pope and a Coptic patriarch — Paul VI and Shenouda III — on May 10, 1973.

According to its tradition, the Coptic Church was founded by St. Mark the Evangelist. Its leader is known as the pope of the Coptic Orthodox Church of Alexandria.

The Coptic Church grew apart from the Catholic Church after the Council of Chalcedon in 451 and is known today as one of the six autocephalous Oriental Orthodox Churches.

ACI Stampa, CNA’s Italian-language news partner, said that Pope Francis spoke to Tawadros II on May 10 via telephone. The Pope reportedly expressed the wish to meet with the Coptic leader following the pandemic. The Pontifical Council for Promoting Christian Unity said that its secretary, Bishop Brian Farrell, and the French Dominican Father Hyacinthe Destivelle marked this year’s celebration by attending a liturgy at the Coptic Orthodox Church of St. George in Rome on Sunday, May 16.

“In his address, Bishop Farrell extended an invitation to strengthen the friendship between Copts and Catholics within the friendship with Christ himself,” the pontifical council said.

In his letter, the Pope thanked Tawadros II for writing the preface “for my book devoted to peace,” which he said would shortly be issued by the Vatican Publishing House.

“Your gracious gesture is a testimony of our brotherhood in Christ, along the path to full communion between our Churches,” he wrote.

“On that path, we are, like the disciples walking to Emmaus, accompanied by Christ himself, who will lead us, I pray, to the greatly desired day when we will celebrate together at the same altar his death and resurrection.”