Pope Francis: No Christian is exempt from aiding the poor 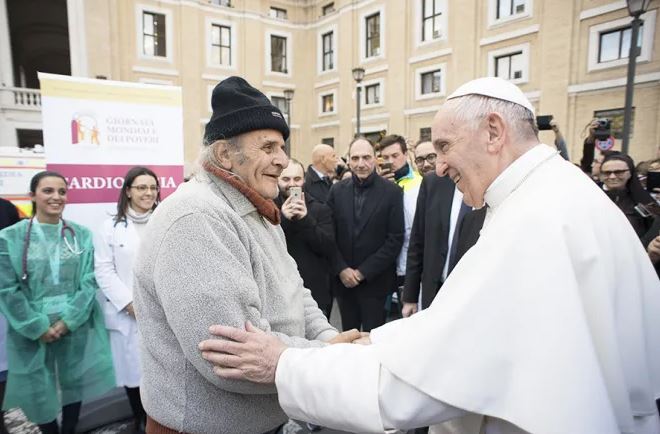 Pope Francis said this week that no Christian is exempt from aiding the poor.

In his message for the 2022 World Day of the Poor, published on June 14, the pope said that the worst thing that can happen to a Christian community is to be “dazzled by the idol of wealth, which ends up chaining us to an ephemeral and bankrupt vision of life.”

“Where the poor are concerned, it is not talk that matters; what matters is rolling up our sleeves and putting our faith into practice through a direct involvement, one that cannot be delegated,” Pope Francis said.

“No one must say that they cannot be close to the poor because their own lifestyle demands more attention to other areas. This is an excuse commonly heard in academic, business or professional, and even ecclesial circles. None of us can think we are exempt from concern for the poor and for social justice,” he added.

The pope underlined that it is not a question of approaching the poor with “a welfare mentality,” but of ensuring that no one lacks what is necessary.

He warned Catholics against laxity and inconsistent behavior with regard to the poor.

He said: “At times … a kind of laxity can creep in and lead to inconsistent behavior, including indifference about the poor. It also happens that some Christians, out of excessive attachment to money, remain mired in a poor use of their goods and wealth. These situations reveal a weak faith and feeble, myopic hope.”

Pope Francis established the World Day of the Poor in 2016 at the end of the Church’s Jubilee Year of Mercy. The day is celebrated each year on the 33rd Sunday of Ordinary Time, a week before the feast of Christ the King.

The 6th World Day of the Poor will be celebrated on Nov. 13 with the theme “for your sakes Christ became poor,” inspired by 2 Corinthians 8:9.

In the message, signed on the June 13 feast day of St. Anthony of Padua, the pope made a distinction between poverty that humiliates, in which people live in squalor, and Christian poverty that sets people free and brings peace.https://538eca6f3e3cdbf6c9ae966a73d64c11.safeframe.googlesyndication.com/safeframe/1-0-38/html/container.html

“Jesus’ words are clear: if we want life to triumph over death, and dignity to be redeemed from injustice, we need to follow Christ’s path of poverty, sharing our lives out of love, breaking the bread of our daily existence with our brothers and sisters, beginning with the least of them, those who lack the very essentials of life,” he said.

“This is the way to create equality, to free the poor from their misery and the rich from their vanity, and both from despair.”

At a press conference on June 14, Archbishop Rino Fisichella highlighted some Vatican initiatives to help aid the poor in coordination with the World Day of the Poor.https://538eca6f3e3cdbf6c9ae966a73d64c11.safeframe.googlesyndication.com/safeframe/1-0-38/html/container.html

He said that 500 families received assistance with rent, insurance, gas, electricity, and water bills thanks in part to the Italian financial services company UnipolSai, and that tons of basic food supplies were distributed thanks to the generous collaboration of local supermarkets in the Diocese of Rome.

In his message for the World Day of the Poor, Pope Francis also raised the question of what more can be done to help the millions of people living in war-torn Ukraine and other conflict zones.

“What great poverty is produced by the senselessness of war,” he said.

“Millions of women, children, and elderly people are being forced to brave the danger of bombs just to find safety by seeking refuge as displaced persons in neighboring countries. How many others remain in the war zones, living each day with fear and the lack of food, water, medical care, and above all human affections?”

Courtney Mares is a Rome Correspondent for Catholic News Agency. A graduate of Harvard University, she has reported from news bureaus on three continents and was awarded the Gardner Fellowship for her work with North Korean refugees.