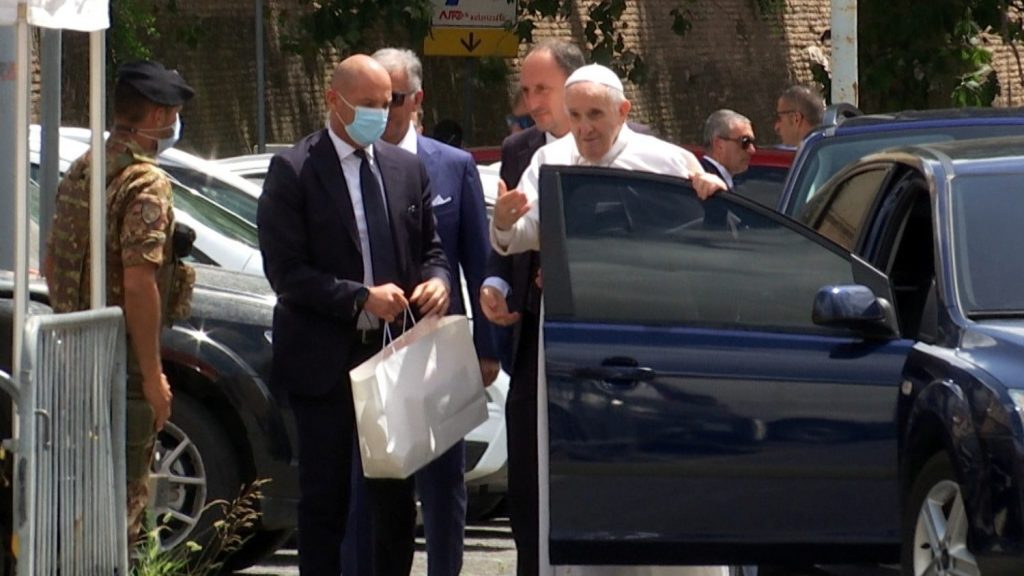 The Pope leaves Gemelli hospital on Wednesday morning and visits the Basilica of Saint Mary Major to pray before the icon of the Virgin Mary Salus Populi Romani before returning to the Vatican just before 12 pm.

The Director of the Holy See Press Office, Matteo Bruni, has confirmed that the Holy Father was discharged from Agostino Gemelli Hospital shortly after 10.30 this morning.

In responding to questions from journalists, he noted that “Before returning to the Vatican, the Pope went to the Basilica of Saint Mary Major where, before the icon of the Virgin Mary Salus Populi Romani, he expressed his gratitude for the success of his surgery and offered a prayer for all the sick, especially those he had met during his stay in hospital. Shortly before midday he returned to Casa Santa Marta.”

Pope Francis later sent a tweet via his @Pontifex profile: “I thank all those who have been close to me with prayer and affection during my hospital stay. Let us not forget to pray for the sick and for those who assist them.”

Wide media coverage focused on the Pope’s operation and hospitalization. It began quietly after the noontime Angelus of July 4th. In the early afternoon that day, the Director of the Press Office issued a statement that instantly became breaking news on what would usually be a sleepy summer Sunday in Rome, when he said the Pope had left his Casa Santa Marta residence and headed to the Agostino Gemelli University Hospital for a “scheduled surgery”. Finally, close to midnight the Press Office issued the first medical bulletin noting that the Pope “has reacted well” to the operation due to a “diverticular stenosis of the sigma”.

The affection of the world

His hospitalization marked the beginning of a week in which the eyes of the world moved from Saint Peter’s Square to the tenth floor of Gemelli Hospital. Crowds began to gather outside the hospital, looking up out at the 10th floor windows out of curiosity, but also to accompany in prayer Pope Francis convalescing in the rooms up there. Among the first to wish the Pope a speedy recovery are Patriarch Bartholomew I and the Imam of al-Azhar Al Tayyeb. Soon from every part of the world, especially via social media, messages full of affection flooded in. Among the most expressive ones were cards from children hospitalized in Pediatric Oncology, a department located in front of the Pope’s recovery rooms. The Pope visited with some of them on Monday afternoon and blessed them together with their families and the hospital staff.

Close to the sick

Daily mid-day medical updates marked the days of his hospitalization with reassuring press bulletins describing the Pope as alert and doing well after his operation. They then recounted his continuing recovery up to the completion of his post-operative treatment on Monday, when it was announced a few more days were added to his expected week-long hospitalization in order to complete the needed therapy. As concern for the Pope’s state of health became less urgent, the Pope’s stay at Gemelli Hospital presented opportunities to show his closeness to the sick and underscore the universal responsibility to assist and help them.

The highlight came last Sunday when the Pope made his first public appearance for the noontime Angelus led from the balcony of the tenth floor rooms. The crowds below cheered the Pope when he appeared, noticing he looked like he was doing well with his recovery. The Pope made an appeal for “good health service, accessible to all”. He also stressed that no one, from sick children to the elderly, should be “left alone” and that everyone “may receive the anointing of listening, closeness, tenderness and care.”