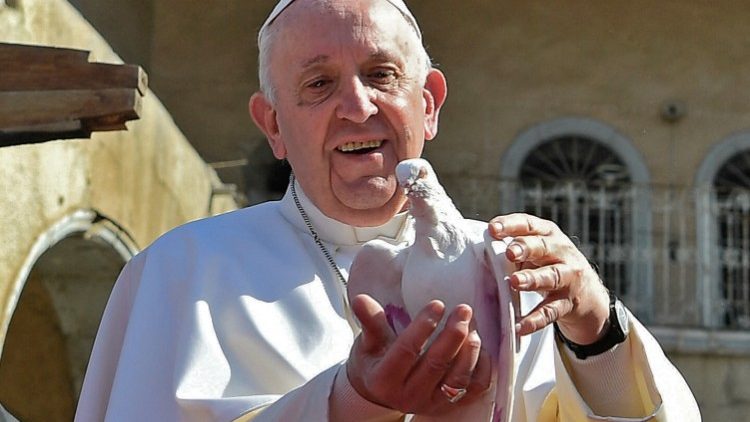 On July 11, Pope Francis led the Sunday Angelus from a balcony on the 10th floor of the Gemelli Hospital, where his operation and recovery are taking place.

VATICAN CITY —Pope Francis will stay longer in hospital to recover from a surgery on his colon, the Vatican said on Monday.

Vatican spokesman Matteo Bruni said July 12 that the pope would remain at Rome’s Gemelli Hospital for “a few more days” before being discharged, “to optimize the medical and rehabilitation therapy.” Bruni said that the pope spent a “calm day” yesterday and that he offered Mass again in the private chapel of his hospital suite.

Pope Francis was hospitalized on July 4 to undergo an operation to relieve stricture of the colon caused by diverticulitis, a common condition that involves the formation of small bulges or sacs on the wall of the colon. On July 11, Pope Francis led the Sunday Angelus from a balcony on the 10th floor of the Gemelli Hospital, where his operation and recovery are taking place.

“In these days of being hospitalized, I have experienced how important good health care is, accessible to all, as it is in Italy and in other countries,” Pope Francis said in his first public appearance after his surgery. He also expressed his appreciation and encouragement to doctors, healthcare workers, and hospital staff. “They work so hard,” the pope said. Young patients stood beside Francis and waved as he delivered his address.

“And let us pray for all the sick. Here are some friends who are sick children,” he said, gesturing to the children next to him.

Bruni said on July 12 that, “before the recitation of the Angelus, [Pope Francis] wished to meet some young patients from the nearby oncology ward with their families who, subsequently, accompanied him to the terrace on the 10th floor on the occasion of the Marian prayer.”

“At the end, he greeted the hospitalized patients on the floor, chatting briefly with the medical and nursing staff,” the Vatican spokesman added. While in hospital, the pope has been staying in a wing reserved for papal medical emergencies, in the same suite where St. John Paul II stayed for various medical treatments during his pontificate.

According to Bruni, Pope Francis reflected on the victories of the Argentine and Italian national soccer teams.

Argentina triumphed over Brazil in the Copa America and Italy beat England to win Euro 2020 on July 11. “His Holiness,” the spokesman said, “dwelt on the meaning of sport and its values, and on that sporting ability to be able to accept any result, even defeat: ‘Only in this way, faced with the difficulties of life, can we always get involved, fighting without giving up, with hope and trust,’” the pope said. A 10-person medical team was involved in Francis’ surgery on July 4, which was carried out under general anesthesia, lasted about three hours, and included a left hemicolectomy, the removal of one side of the colon. This was Francis’ first major operation during his pontificate. In 2019, he had an outpatient surgery for cataracts and he occasionally suffers from flare-ups of sciatic pain.

“At this particular moment, [Pope Francis] looks toward all those who suffer, expressing his closeness to the sick, especially those most in need of care,” Bruni said in one of the Holy See’s daily health bulletins.