Pope: In Our Lady’s mantle, the devil can’t get in 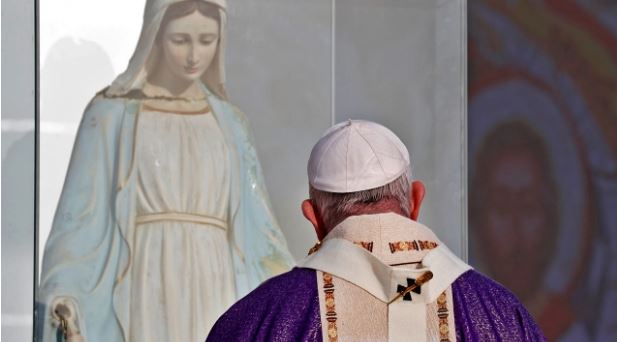 This beautiful homily is a reminder we need today.

On the feast of Our Lady of Sorrows in 2016, the Pope reflected on how we live in a world of “orphans” — people searching for company, for guidance, for peace. In this world, he said, Mary is the mother who fully understands and defends us. It’s a lesson we need even more today.

Pope Francis recommended that in difficult moments we always seek refuge “under the mantle” of the Mother of God. Thus he repeated the “spiritual council of Russian mystics,” which in the West have been reprised in the antiphon Sub tuum preasidium. This is the prayer, “We fly to Thy protection, O Holy Mother of God. Do not despise our petitions in our necessities, but deliver us always from all dangers, O Glorious and Blessed Virgin.”

It is the oldest Marian prayer, found on an ancient Egyptian papyrus dating from around the year 250. Today known in the Church as the Sub tuum praesidium, the prayer is written in Greek, and is believed to have been part of the Coptic Vespers liturgy during the Christmas season.

The mother of this criminal!

The Pope noted how under the cross there was “only one disciple with Jesus’ mother, with Mary Magdalene and the other Mary, a relative.”

Francis said that as Mary stood beside “her Son, naked there” on the cross, she experienced “such intense suffering, but did not leave, she did not deny her Son, He was her flesh.”

The Pope recalled: “When I was in the diocese of Buenos Aires, it would often happen that when I went to prisons to visit the inmates, I would see a queue, a line of women waiting to enter: They were the mothers, but they were not ashamed, their own flesh was there inside” the prison. Those “women suffered not only the shame of being there, hearing people say: ‘Look at her, what did her son do?’” Those mothers “also suffered the worst humiliation of the inspections required before they could enter. But they were mothers, and they were going there to see their own flesh.” And so it was for Mary, who “was there, with her Son, with that great suffering.”

A refuge from Satan

Precisely from the Cross, the Pope noted, “Jesus — who had said he would never leave us as orphans, who spoke of the Father — looked at his Mother and gave her to us as a Mother: ‘Behold, your Mother!’”

The Lord “does not leave us as orphans: we Christians have a Mother,” the same Mother that Jesus had; “We have a Father, the same as Jesus. We are not orphans.”

And Mary “gives birth in that moment, with so much pain. It is truly a martyrdom: with her pierced heart, she agrees in that painful moment to give birth to all of us. And from that moment on she became our Mother, since that moment she is our Mother, the one who takes care of us and is not ashamed of us: she defends us.”

“The Russian mystics of the early centuries of the Church,” Pope Francis noted, in this regard, “counseled their disciples, the young monks to take refuge under the mantle of the Holy Mother of God during times of spiritual turmoil. The devil cannot enter there because she is Mother, and as a Mother she defends.”

Thus “the West took this counsel and created the first Marian antiphon, Sub tuum praesidium: Under your mantle, placed under your care, O Mother, we are safe there.”

He continued, “she has been faithful to this offspring to this very day, and will continue to be faithful.”

In a world “which we might call an ‘orphan,’ this world that suffers the crisis of a great orphanhood, perhaps we can offer our help by saying: ‘Look to your mother!’” Because we have a mother “who defends us, teaches us, accompanies us, and is not ashamed of our sins.” Indeed, “she is not ashamed, because she is Mother.”

Read the full summary of the homily here.