Pope on Palm Sunday: Let us ask for the grace to be amazed 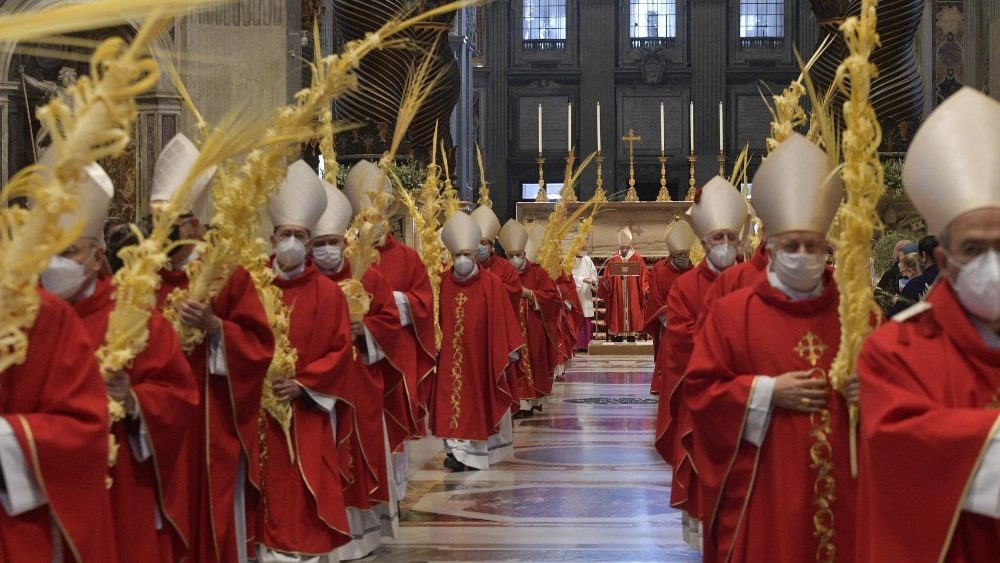 Presiding over the liturgy of Palm Sunday of the Lord’s Passion, Pope Francis underscored the sense of interior amazement that marks this celebration and remains with us throughout Holy Week.

For the second year in a row, Pope Francis led the celebration of Palm Sunday inside Saint Peter’s Basilica with a limited congregation participating due to the Coronavirus pandemic. At the same time, millions joined the celebration with the customary global television and radio broadcasts and live streaming.

From admiration to amazement

In his homily for the occasion, the Holy Father focused his thoughts around the sense of amazement evoked in today’s liturgy and all of Holy Week, since we go from the joy of welcoming Jesus as he enters Jerusalem to the sorrow of seeing him condemned to death and crucified. We hear of the crowds shouting “Hosanna” and a few days later crying out “Crucify him”. The Pope said this contrast reflected a reality where people admired Jesus, but did not let themselves be amazed by him. He said both terms are fundamentally different: admiration “can be wordly” since it follows its own likes and expectations, whereas, amazement remains open to the wonder of others and the newness they bring, allowing our attitudes and lives to change as a result. We have to go be beyond admiring Jesus, the Pope said, and “follow in his footsteps, to let ourselves be challenged by him; to pass from admiration to amazement.”READ ALSO28/03/2021

The Lord and his Passover amazes us, as he achieves glory through humiliation, the Pope observed; he triumphs “by accepting suffering and death, things that we, in our quest for admiration and success, would rather avoid.” And Jesus did this for us, going to the depths of human experience, existence, and weakness “to draw near to us and not abandon us in our suffering and our death”, the Pope said, “to redeem us, to save us”. In this way the Lord “redeemed and transformed” our deepest struggles and conflicts, he noted; “God triumphs, but the palm of victory passes through the wood of the cross.”

Ask for the grace to be amazed

A faith that no longer experiences a sense of amazement can grow dull, the Pope noted, whereas we should remember to be “astonished and amazed” by the love of Jesus which always brings forgiveness and the possibility of new beginnings. The Pope invited everyone to “lift our eyes to the cross, in order to receive the grace of amazement”, to be moved by God’s boundless love and let go of our regrets or disappointments that might be trapping us from experiencing it.

“Let us be amazed by Jesus so that we can start living again” the Pope underscored, and realize that we are loved by Jesus upon whom we gaze on the cross. The grace of amazement helps us also realize that in welcoming the dismissed and discarded who surround us – those ill-treated in life – “we are loving Jesus”, the Pope said, “for that is where he is: in the least of our brothers and sisters, in the rejected and discarded.”

Truly this man was the Son of God!

The exclamation of the Roman Centurion who upon seeing that Jesus died said: “Truly this man was the Son of God!” is a powerful testimony of his amazement in witnessing the gratuitous and unprecedented love of Jesus, the Pope said. The Gospels mention many others who admired Jesus for his miracles and works, but Christ silenced them, the Pope noted, because they risked embracing only the idea of a God to be adored and feared for his power and might. That understanding must evolve since at the foot of the cross, “God has revealed himself and reigns only with the disarmed and disarming power of love”, which is why today, the Pope concluded, “let us be filled with that amazement as we gaze upon the crucified Lord.  May we too say: “You are truly the Son of God.  You are my God”.