Pope says he is ‘deeply sorry’ to Indigeneous Peoples in Canada 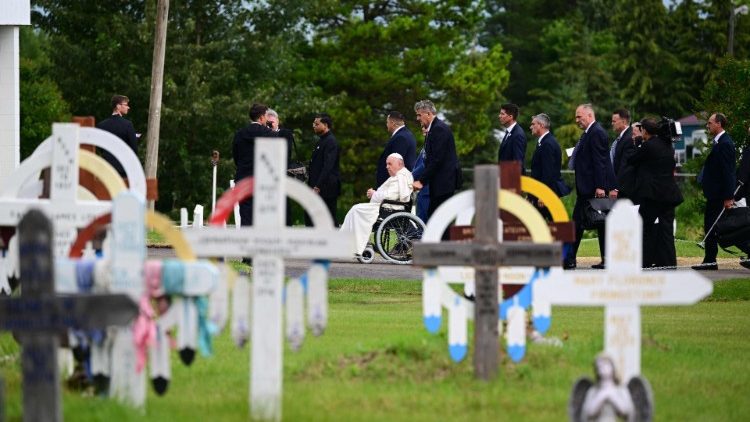 In his first public event in Canada, Pope Francis addresses representatives of Indigenous Peoples of the First Nations, the Métis and the Inuit gathered in Maskwacis Park, near Edmonton. In his poignant speech, he again implores forgiveness for the evils committed by many Christians against the Indigenous Peoples in Canada in the residential school system.

The words sorry, shame, pain and indignation resounded strongly in Pope Francis’s first public speech of his penitential pilgrimage to Canada. Addressing some 2,000 Indigenous people residential school survivors, Chiefs, leaders, elders, knowledge keepers and youth from First Nations, Métis and Inuit communities in Maskwacis Park (“Bear hills”, in the Cree language) on Monday, the Pope reiterated his deep sense of “pain and remorse” for the suffering inflicted on the Indigenous peoples of Canada, and specifically for the violence of forced assimilation endured in the residential school system.

He said he has come to their native lands to tell them, in person, of his “sorrow”, “to implore God’s forgiveness, healing and reconciliation”, to express his closeness, and to pray with and for them.

The Pope recalled the meetings he had in Rome with the Canadian Indigenous Delegations between 28 March and 1 April in which he heard their stories about life in the Indian residential schools. On that occasion, he was given two pairs of moccasins as a sign of the suffering endured by indigenous children there, which he was asked to return when he came to Canada. The Holy Father noted that those mocassins speak of a path of “healing and reconciliation” to be followed “together”

“We want to walk together, to pray together and to work together, so that the sufferings of the past can lead to a future of justice, healing and reconciliation.”

The need to remember

Pope Francis went on stress the importance of remembering this dark past of disruption and destruction of ancestral cultures. However painful, he said, to remember the “devastating experiences” that took place in the residential schools is necessary, because “forgetfulness leads to indifference”, and also in light of the lasting impact of that system on Indigenous communities up until today.

“I think back on the stories you told: how the policies of assimilation ended up systematically marginalizing the indigenous peoples; how also through the system of residential schools your languages and cultures were denigrated and suppressed; how children suffered physical, verbal, psychological and spiritual abuse; how they were taken away from their homes at a young age, and how that indelibly affected relationships between parents and children, grandparents and grandchildren.”

A disastrous error, incompatible with the Gospel

While thanking the Indigenous peoples of Canada for sharing these bitter memories with him, Pope Francis said he is “deeply sorry” for “the ways in which, regrettably, many Christians supported the colonizing mentality of the powers that oppressed the indigenous peoples”. “With shame and unambiguously” he again implored forgiveness “for the ways in which many members of the Church and of religious communities cooperated in projects of cultural destruction and forced assimilation”.

“Although Christian charity was not absent, and there were many outstanding instances of devotion and care for children, the Pope emphasized that “the overall effects of the policies linked to the residential schools were catastrophic”, remarking that the system was a “disastrous error, incompatible with the Gospel of Jesus Christ”.

Begging pardon is only a first step

However, Pope Francis acknowledged that begging for pardon is not sufficient and is only a first step towards healing He said a further step needs to be taken “to create a culture able to prevent such situations from happening”.

An important part of this process, “will be to conduct a serious investigation into the facts that took place in the past and to assist the survivors of the residential schools” as they heal from the traumas they suffered.

Commitment to persevere in the path of healing

The Pope further expressed hope that Christians and civil society in Canada  “grow in the ability to accept and respect the identity and the experience of the indigenous peoples”, while reiterating the Catholic Church’s commitment on this issue.

“We are speaking of processes that must penetrate hearts. My presence here and the commitment of the Canadian Bishops are a testimony to our will to persevere on this path.”

Pope Francis specified that, though he was not able to accept the many invitations received to visit other parts of Canada, his words throughout this penitential journey “are meant for every indigenous community and person”.

Concluding, the Pope called for silent prayer  “to help interiorize the pain,  as “our own efforts are not enough to achieve healing and reconciliation” and “we need God’s grace”, “May He guide our steps and enable us to advance together on our journey”, the Pope concluded.

At the beginning of the meeting, Pope Francis was greeted by Cree Chief Wilton Littlechild, who, on behalf of the First Nations, Métis and Inuit communities, expressed deep appreciation for “the great personal effort” he has made to meet Indigenous peoples in their homeland. Usow-Kihew (“Golden Eagle”) as he is known in his Cree community, is a former student of the local Ermineskin Indian Residential School and has been a Commissioner of the Truth and Reconciliation Commission, which in 2015 published a report into the history and legacy of Canada’s residential school system.

In his address he warmly welcomed Pope Francis’ joining the Indigenous peoples of Canada in their journey of healing and reconciliation, and said the words he spoke after meeting the Indigenous delegations in Rome and listening to their stories, were “a source of deep comfort and great encouragement”.