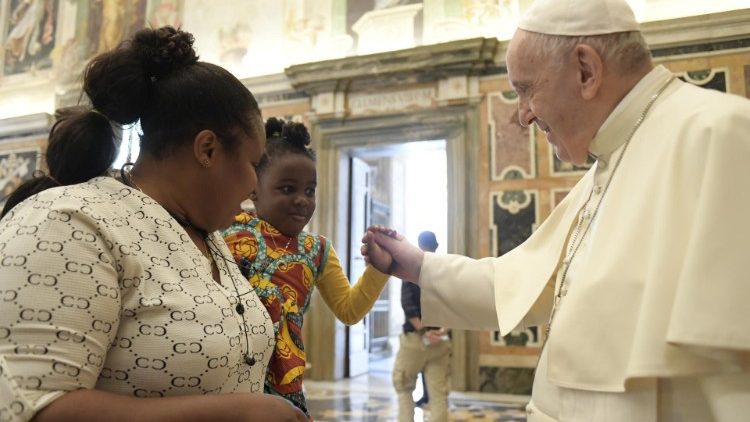 Pope Francis greets members of a Catholic association that offers shelter and assistance to mothers and children in difficulty.

Marking the 30th anniversary of the Arché Foundation—an organization that accompanies and supports vulnerable children and families—Pope Francis thanked the founder and staff for their work “to free mothers and children from bonds of violence and mistreatment.”

The Pope addressed Fr Giuseppe Bettoni, the Italian priest who established Arché in Milan in 1991 in response to the HIV emergency affecting children and their families, and thanked him and his associates for coming to the Vatican to tell their story.

He noted that the choice of the Foundation’s name—Arché—is significant as it recalls our origins, “the beginning, and we know that in the beginning there is Love, the love of God.”

“All that is life, all that is beautiful, good and true comes from God who is love,” the Pope said, adding that “just as human life comes from a mother’s womb, Jesus who is Love made flesh came from the heart and womb of a Mother.”

And continuing on this thread, the Pope said: “In the beginning, there are the faces of those mothers and children whom you have welcomed and helped to free themselves from the bonds of violence and mistreatment.” And he made a special mention of so many migrant women who have been offered a welcome and a shelter by Arché.

Pope Francis told those present that the Arché communities are a sign of hope for all, “first of all for these women and their children,” but also for those who share their lives with them, and “for the volunteers, the young people, the young couples who in these communities experience service not only for the poor but with the poor.”

In this context, the Pope said the familiar Christian icon of the Mother and Child “has not remained just a pretty picture”; instead, Arché has translated it into a concrete experience.

Of course, he continued, it is an experience that includes many problems, difficulties, and hardships, but it also means joy: “The joy of seeing that sharing opens up paths to freedom, rebirth, and dignity.”

Finally, he blessed those present and expressed his appreciation and good wishes for the upcoming inauguration of a new community house in Rome.

“May it be a place where you live God’s style, which is closeness, tenderness, and compassion,” the Pope concluded, “And may it always be at the service of people, never the other way around.”