Pope to priests: Be “shepherds with ‘the smell of the sheep'” 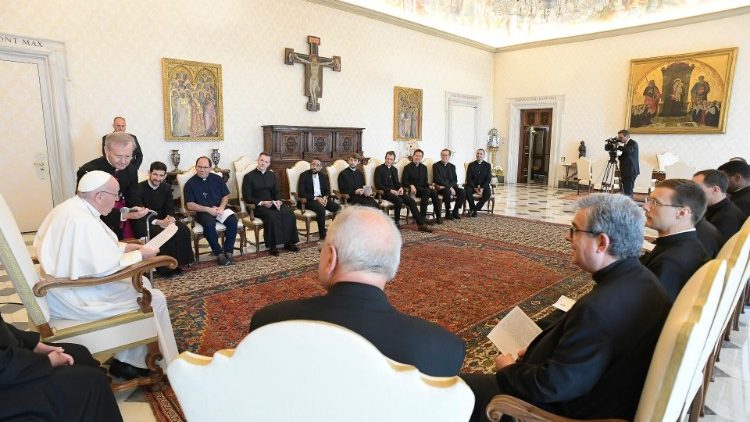 Pope Francis on Monday meets with a group of French priests pursuing higher ecclesiastical studies in Rome, and speaks to them about their future pastoral work and their community witness.

Pope Francis on Monday recalled a favourite imagery of a pastor, urging that priests be “shepherds with the ‘smell of the sheep’”, grounded in the situation of their flock. He made the remark to the community of French student priests who reside in a community at the hostel of the Church of St. Louis of the French in Rome.

“Smell of the sheep”

“The studies you undertake in the various Roman universities prepare you for your future tasks as pastors and enable you to better appreciate the reality in which you are called to proclaim the Gospel of joy”, he told some 19 priests of the ‘national church of the French’ in the Italian capital. He said they should not go into the field to apply theories without considering the environment in which they will be working or the people entrusted to their care. “I wish you to be shepherds with ‘the smell of the sheep'”, the Pope said, repeating once again the analogy he used in his homily at the Chrism Mass on March 28, 2013, a fortnight after his election.

He said pastors should be “people capable of living, of laughing and crying with your people, in a word, of communicating with them”. He expressed concern that sometimes reflections and thoughts on priesthood are laboratory sample: this priest, that priest and so on.  He said priesthood isolated from the people of God, is neither a Catholic priesthood nor a Christian one.

“Strip yourselves of your pre-constituted ideas, your dreams of greatness, your self-assertion, in order to put God and people at the center of your daily concerns,” the Pope said, stressing that a pastor is one who puts God’s holy faithful people at the centre.  For those priests who would like to be an intellectual, not a pastor, the Pope said, it is better for them to be lay persons. A priest has to be a pastor in the midst of God’s people because God has chosen him for that.

Pope Francis also advised the French priests regarding their community life, saying individualism, self-assertion, and indifference are some of the challenges of living together.  He warned them against “the temptation to create small closed groups, to isolate oneself, to criticize and speak ill of others, to believe oneself superior, more intelligent”.

The Pope said that gossip is a habit of closed groups, of “bachelor’ priests who talk and malign others, undermining all. “We need to let go of this habit and look at and think about God’s mercy”.  The Pope wished that they always welcome one another as a gift. “In a fraternity lived in truth, in the sincerity of relationships and in a life of prayer, we can form a community in which we can breathe the air of joy and tenderness.”

The Holy Father encouraged a community life of sharing and prayer with joy. He said, “The priest is a man who, in the light of the Gospel, spreads the taste of God around him and transmits hope to restless hearts”. To those visiting their community, they can communicate the Gospel values of a “diverse and supportive fraternity”, and make them feel the fidelity of God’s love and His closeness.

In this regard, the Pope offered to them the model of St. Joseph, inviting them to “rediscover the face of this man of faith, this tender father, model of fidelity and trusting abandonment to God’s plan”.   St. Joseph, he said, teaches us that faith in God includes believing that He can work even through our fears, our frailties and our weaknesses.

Our frailties is a “theological place of encounter with the Lord”, the Pope said, adding, a “fragile priest”, who knows his weaknesses and talks about them with the Lord, will do well.  Instead, “superman” priests end up badly.  “With Joseph,” the Pope said,  “we are called to return to the experience of the simple acts of acceptance, tenderness, and the

Joy and sense of humour

The Pope also urged the young French priests to build a Church that is entirely at the service of a world that is more fraternal and in solidarity. They should not be afraid to dare, to risk and to go forward, assured that with Christ they can be apostles of joy and be grateful for serving their brothers and sisters and the Church.

Recalling their priestly ordination, he reminded them that they have been anointed with the oil of joy and are to anoint others with the oil of joy. He said only by remaining rooted in Christ can they experience a joy that moves them to win hearts. “Priestly joy is the source of your action as missionaries of your time”, he said.

Another virtue the Holy Father encouraged the young priests to cultivate is gratitude to God for what they are to one another. “With your limitations, your frailties, your tribulations”, Pope Francis reminded them, “there is always a loving gaze resting on you and giving you confidence”.

Gratitude “is always ‘a powerful weapon'”, he said, which “allows us to keep the flame of hope burning in moments of discouragement, loneliness and trials”.