Pope to priests: Seek to eradicate all forms of inequality 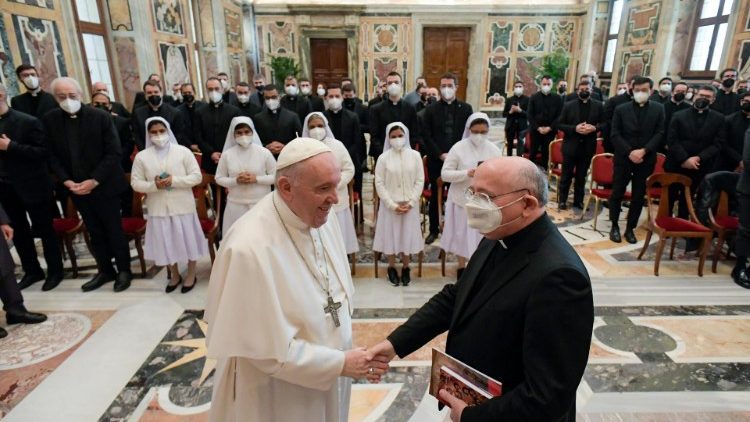 On the occasion of the hundredth anniversary of the election of Pope Pius XI to the See of Peter, Pope Francis met Monday with the community of the Pontifical Lombard Seminary of Saints Ambrose and Charles in Urbe.

In his speech to the priests of the Pontifical Lombard Seminary of Saints Ambrose and Charles in Urbe on Monday, the Pope drew inspiration from the figure of Pope Pius XI.

He noted that the Successor of Peter had attended this seminary, located just a stone’s throw from the Roman Basilica of St Mary Major, and had been one of its first pupils.

As soon as he was elected one hundred years ago, noted Pope Francis, Pius XI wanted his first blessing to be addressed Urbi et Orbi, to the city of Rome and to the whole world.

“With this gesture, he reminds us that we need to open up, to expand the horizon of ministry to the dimensions of the world, to reach out to every child, whom God wishes to embrace with his love,” said the Pope.

In off-the-cuff remarks, Pope Francis commented, “Do not forget that God never tires of forgiving. It is we who tire of asking for forgiveness.”

A world waiting for the Gospel

He then urged those present not to remain “barricaded in the sacristy” and not to “cultivate small closed groups.”

Pope Francis told them there was a world “waiting for the Gospel,” and went on to say that what was needed was “the testimony of life.”

“Be priests burning with the desire to bring the Gospel to the streets of the world, in neighbourhoods and homes, especially in the poorest and most forgotten places,” he said.

What can I offer the Lord?

Drawing further inspiration from Pius XI, Pope Francis recalled his predecessor’s first papal homily, in which he invited people to ask themselves a question: “What can I offer the Lord?”

“What can I offer?” is a question that asks you to open your heart to availability and service, the Pope said.

The central point of this, he underlined, is “to be Church in order to live and spread the Gospel,” and to have “an open, willing, missionary heart.”

Finally, Pope Francis again took his cue from his predecessor, recalling a phrase from Pius’ encyclical Quadragesimo anno: “It is obvious that not only is wealth concentrated in our times but an immense power and despotic economic dictatorship is consolidated in the hands of a few[…]”

“How true and how tragic this is now,” said the Pope, “when the gap between the few rich and the many poor is ever wider.”

Pope Francis highlighted that in “this context of inequalities,” which have increased during the pandemic, the priests needed to be “weavers of communion, eradicators of inequality,” as well as being competent and courageous “in raising prophetic words in the name of the voiceless.”

In conclusion, the Pope told the seminarians present, “Great tasks await you.”

He also invited them to help build a Church “that is more faithful to the spirit of the Gospel, more free, more fraternal and joyful in bearing witness to Jesus.”