Pope’s October prayer intention: ‘May all Christians be missionary disciples’ 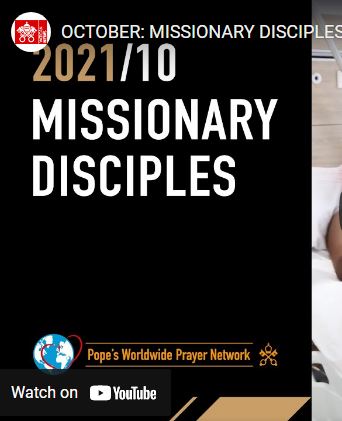 Pope Francis releases his prayer intention for the month of October, calling on everyone to pray that all Christians might be missionary disciples and open to the demands of the Church’s evangelizing mission.

“Jesus asks us all, and you as well, to be missionary disciples. Are you ready?”

Pope Francis opened The Pope Video—containing his prayer intention for the month of October—with that invitation to all Christians.

The Pope said we are all invited to be open to Jesus’ call and to live united to Him in the mundane events of our daily lives.

“Work, meeting other people, our daily duties, and the chance events of each day”: These are the opportunities we have to allow ourselves to be “guided by the Holy Spirit,” said the Pope.

He said other people easily take notice when our every action is motivated by Christ.

“And your testimony of life will inspire admiration, and admiration inspires others to ask themselves, ‘How is it possible for this person to be this way?’ ‘What is the source of the love with which this person treats everyone —the kindness and good humor?’”Listen to our report

Availability for the mission

Pope Francis also recalled that the mission is evangelization and not proselytism.

“The mission is based on an encounter between people, on the testimony of men and women who say, ‘I know Jesus, and I’d like you to know Him too’,” he said.

The Pope then urged all baptized Christians to be open to the demands of the Gospel.

“Let us pray that every baptized person may be engaged in evangelization, available to the mission, by being witnesses of a life that has the flavour of the Gospel,” he said.

A press release accompanying The Pope Video, which is prepared by the Pope’s Worldwide Prayer Network, noted that the October intention comes during the same month in which the synodal process begins and World Mission Day is celebrated.

The Synod process kicks off on 10 October, and will launch a call for all Catholics to walk together as the “pilgrim and missionary people of God.”

According to the Secretary General of the Synod of Bishops, Cardinal Mario Grech, a “synodal Church cannot be other than a missionary Church, because the mission necessarily starts with the dynamism of mutual listening.”

Discernment of the Spirit

Another aspect of Pope Francis’ prayer intention for October is the invitation to “discern and recognize how the Spirit of the Lord is calling us to face the challenges facing humanity and the mission of the Church.”

Fr. Frederic Fornos, SJ, International Director of the Pope’s Worldwide Prayer Network, said the Pope is inviting all Christians to participate in that discernment process by rooting our actions in prayer.