Saints Cornelius & Cyprian and the curative character of excommunication 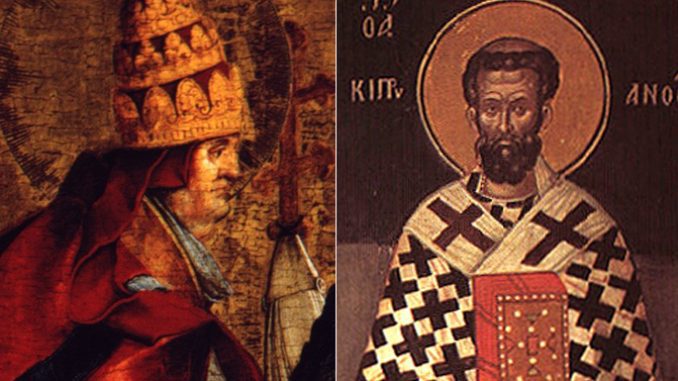 Lessons on authority, communion, and being “pastoral” from the third century.

Today the Church honors the memory of Saints Cornelius (Pope and Martyr) and Cyprian (Bishop and Martyr). Cornelius died on September 14, 253, while Cyprian died on the same day five years later. They were united in a holy friendship on earth, share the same feast in glory, as well as a commemoration in the Roman Canon. There is some irony in the whole affair, however, in that Cyprian found himself in conflict with a Pope for a time and ends up honored liturgically with a Pope.

These two men were involved with some very thorny theological questions, about which we have the space merely to scratch the surface; however, it is nonetheless important to do just that because those very issues are quite current as well.

The first concern was how the Church should handle the pastoral problem of Christians who had weakened in their witness by acquiescing in casting a few grains of incense on to a brazier being used for pagan worship. Some did not actually commit the sin but gave the appearance of having done so, in order to obtain a libellus, that is, a document certifying them as good Roman citizens, faithful to the gods. From the Christian perspective, these people had “lapsed” from an authentic Gospel way of life, hence, dubbed lapsi. With the passage of time, not a few of the lapsi repented of their sin and wished to be reconciled with Christ and His Church.

Three pastoral responses were advanced: Such individuals could never be re-admitted to the communion of the Church (except perhaps on their deathbeds); reconciliation could be effected only after a very protracted period of public penance; the lapsi could be reconciled immediately, on the premise that their action had been taken as a result of fear and not malice. Cyprian took the middle position in the controversy, as did Cornelius. A priest of Rome by the name of Novatian sided with the rigorists, resulting in his excommunication by Pope Cornelius.

Cyprian is probably most famous for his theological mantra of extra Ecclesiam, nulla salus (outside the Church, no salvation). In this instance, Cyprian took a very rigorist and absolutist position. Historically, the Church has assumed a middle position, allowing for the possibility of excusing exceptions like invincible ignorance. Cyprian also maintained that sacraments administered and received outside the full, visible communion of the Catholic Church were invalid. A century later, St. Augustine would deal with all these issues in a very full and theologically nuanced fashion.

Both our saints of the day were exercised over the serious matter of ecclesial unity – both maintaining it and restoring it. Those concerns must be ours as well, so let’s examine some applications of their insights.

In a very gentle but thorough manner, Augustine took issue with Cyprian’s approach. He held that the sacraments, especially Baptism, administered by heretics or schismatics were valid. Why? Because the principal minister in every sacrament is not the human instrument but Jesus Christ, our eternal High Priest. And so, the Fathers of Vatican II, in Sacrosantum Concilium (n. 7), take up Augustine’s adage: “[Christ] is present in the sacraments, so that when a man baptizes it is really Christ Himself who baptizes.”1

This important insight became Augustine’s response to the Donatists, who argued that a sinful, unworthy minister could not confect a valid sacrament. No, the efficacy of a sacrament does not depend on the holiness of the minister – and thank God for that since, if that were the case, we would have very few valid administrations of sacraments!

In their arrogance and elitism, not a few heretics and schismatics of the era proudly declared their separation from the body of the Church, asserting that the “institutional” Church was in error and not they. Augustine addressed the issue thus:

If they say, “Why do you seek us? What do you want of us?” we should reply: You are our brothers. They may say, “Leave us alone. We have nothing to do with you.” But we have everything to do with you, for we are one in our belief in Christ; and so we should be in one body, under one head.

And so, dear brothers, we entreat you on their behalf, in the name of the very source of our love, by whose milk we are nourished, and whose bread is our strength, in the name of Christ our Lord and his gentle love. For it is time now for us to show them great love and abundant compassion by praying to God for them. May he one day give them a clear mind to repent and to realize that they have nothing now but the sickness of their hatred, and the stronger they think they are, the weaker they become. We entreat you then to pray for them, for they are weak, given to the wisdom of the flesh, to fleshly and carnal things, but yet they are our brothers. They celebrate the same sacraments as we, not indeed with us, but still the same. They respond with the same Amen, not with us, but still the same. And so pour out your hearts for them in prayer to God.2

What was Augustine stressing? That baptism makes us all one with Christ and one another and that that fact can never be completely eradicated, even by heresy or schism. Thus, where full ecclesial unity is marred, an imperfect unity remains. This explains how the Church has been able to grant to priests of the Society of St. Pius X faculties to hear confessions and to solemnize marriages.

All of that having been said, there remains the critical matter of how to deal with obstinate heretics or schismatics. We have seen that even the usually mild Cornelius resorted to excommunicating Novatian. What is the purpose of that dire penalty? Its goal is not punitive but curative: not to punish but to heal. In other words, it is to serve as a “wake-up” call to the obstinate sinner and as an instruction to the body of the faithful, lest they be misled by the conduct of very public sinners. Just short of formal excommunication is withholding sacraments until the scandalous behavior is eliminated.

As you well know, the Church in the United States has been dealing with the scandal of pro-abortion politicians who claim to be devout Catholics, with two of them holding two of the three highest offices in the nation. The bishops of the country are in the process of producing a teaching document on “Eucharistic coherence,” which – of necessity – will treat of the sinfulness and incoherence of trying to keep one foot in the world of sin, while the other is attempting to have the other foot in the realm of sanctification. That crisis surfaced most dramatically yesterday in another one of the Pope’s confused, confusing and disastrous in-flight press conferences on his way back to Rome from Slovakia.

A reporter from the Jesuit-run America magazine (surprise!) asked Francis for his opinion on how to handle the obvious disconnect of such politicos. In language stronger and more graphic than any of his predecessors, he asserted: “Abortion is more than an issue. Abortion is murder. . . . Scientifically it [the fetus] is a human life. The textbooks teach us that. But is it right to take it out to solve a problem? And this is why the Church is so strict on this issue because it is kind of like accepting this is accepting daily murder.” So far, so good.

Then he proceeded to say that the way to deal with the problem is not through the application of church penalties but through being “pastoral,” accompanying these scandalous pols. He refused to discuss the concrete situation of the United States because, he claims (disingenuously, I would say) he does not know the precise details. If that is so, then he should have simply punted and not made remarks that will be used against our bishops (who do know the situation) in their efforts to right the course. Where is the much-vaunted “synodality” and “collegiality” when it is needed most?

Ironically, his “pastoral” call now is seemingly out of “sync” with the 2007 Aparecida document of the bishops of Latin America – a document known to be of his composition for the most part. Therein we read:

We hope that legislators, heads of government, and health professionals, conscious of the dignity of human life and of the rootedness of the family in our peoples, will defend and protect it from the abominable crimes of abortion and euthanasia… We must adhere to ‘Eucharistic coherence,’ that is, be conscious that they cannot receive holy communion and at the same time act with deeds or words against the commandments, particularly when abortion, euthanasia, and other grave crimes against life and family are encouraged. This responsibility weighs particularly over legislators, heads of governments, and health professionals.

Why did the inquiring reporter not pose a follow-up question, such as: “Your Holiness is the acknowledged inspiration and motive force behind the Aparecida document, which is quite clear on the need for ‘Eucharistic coherence.’ Have you changed your mind since becoming Pope?”

However, for the sake of pursuing the current papal line of thought, let’s explore the “pastoral” approach. That adjective comes from the Latin pastor, which means “shepherd.” How does a shepherd handle a wayward sheep. He uses his crook or staff, first to tap the errant member of his flock on the head, alerting him to the danger of his behavior; if that doesn’t work, he then utilizes the crook of his staff to drag the wandering sheep back into the flock by his neck. That’s the very reason that one of the episcopal insignia is, precisely, a crozier (which, the Italians often call the pastorale).

When the Pope counsels “accompaniment” of scandalous public officials, he seems to be ignorant of the fact that bishops have been “accompanying” those folks for decades, to no effect. In fact, they have gotten even bolder in their dissent. Being “pastoral” at this point in our history would suggest exchanging the gentle tap on the head for the full force of the crook, for the salvation of the wandering sheep and for the safety of the rest of the flock of Christ.

I suspect Cornelius and Cyprian would agree.

(Editor’s note: This homily was preached, in slightly different form, on September 16, 2021, the liturgical memorial of Saints Cornelius and Cyprian, at the Church of the Holy Innocents in New York City.)

If you value the news and views Catholic World Report provides, please consider donating to support our efforts. Your contribution will help us continue to make CWR available to all readers worldwide for free, without a subscription. Thank you for your generosity!